Bastard Out of Carolina Reader’s Guide 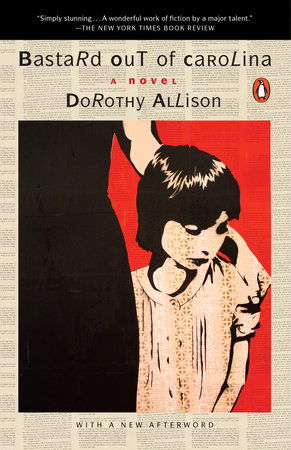 Bastard Out of Carolina Reader’s Guide

The Village Voice has called her “a hell of a writer-tough and loose, clear and compassionate.” George Garrett, author and critic who reviewed Bastard Out of Carolina for The New York Times Book Review wanted to “blow a bugle to alert the reading public that a major new talent has arrived.” Critics have likened her to William Faulkner, Flannery O’Connor and Harper Lee, naming her the first writer of her generation to dramatize the lives and language of poor whites in the South. “She has an all-encompassing knowledge of what it’s like to be the other, the outsider,” says Studs Terkel. Garrett agrees: “It’s as if the people in Dorothea Lange photographs, in the work of Margaret Bourke-White and Walker Evans, were able to speak.” But with a dead-center look that says “Don’t mess with me, honey. I’m liable to pour gravy on you,” Allison defies easy characterization, as one writer for The New York Times put it. And she likes it that way.

Part gospel singer, part country preacher, Allison often jokes that as a girl she wanted to be Janis Joplin. She has a wardrobe full of rhinestone-studded leather jackets and a desk drawer full of family snapshots. She’s a mean shot with a rifle, and her language is always dead-on: lush, beautiful, and brutal. “Dorothy sees everything”, says Jewelle Gomez, the poet and novelist. Allison has spent her entire life telling forbidden stories, pulling her best fiction out from the edge of terror and the courage to heal. In Two or Three Things I Know for Sure, a short memoir she published in 1995, Allison writes:

“Where I was born—Greenville, South Carolina—smelled like nowhere else I’ve been. Cut wet grass, split green apples, baby shit and beer bottles, cheap makeup and motor oil. Everything was ripe, everything was rotting. Hound dogs butted my calves. People shouted in the distance; crickets boomed in my ears. That country was beautiful, I swear to you, the most beautiful place I’ve ever been. Beautiful and terrible.”

Allison wants the hard and terrible stories, she demands them from herself. And her readers wait for them.

This autobiographical novel about a young girl in the rural South facing abuse and betrayal won high critical acclaim and a National Book Award nomination upon its release in 1992. The power of Bastard Out of Carolina is simultaneously narrative, emotional, and political. “The novel is mean,” Allison says, “meant to rip off all that facade of imagination and lies we place around sexual violence and children.”

The backdrop of this tale is Greenville, South Carolina, and its narrator is “Bone” Boatwright, a twelve year old trying to remember and comprehend the events that led to her being abandoned by her mother. Bone and her sister Reese are surrounded by colorful characters, most of them relations. Her uncles are feared by men and adored by women, while her aunts are long-suffering yet defiant. Her grandmother is a strict matriarch who loves her brood but “always loved her boy children more.” While Anney Boatwright and her two girls face many trials —Bone’s illegitimacy, the death of Reese’s father —their real trouble starts when Anney marries Glenn Waddell, the black sheep of a prominent family, whose most outstanding characteristics are his uncontrollable temper and oversized hands. Though Daddy Glenn at first offers the girls sugary reassurances, when Anney miscarries his child he turns against them. Instead of lashing out at his wife, Glenn chooses the weakest target, Bone, and tears the family apart by claiming to need Anney’s love and care more than her own young daughters do. Even as Bone suffers immense hardship, she is not alone. Fierce determination and a loving extended family help her through, and though our heartsache to think of what Bone must bear, her perseverance leaves us hope for her future.

Allison says she designed the book so that the reader meets all these people —Bone, Anney, and Glenn, the wild uncles and long-suffering aunts —and becomes gradually drawn into their world through the character of Bone. “You see what happens —Daddy Glen’s cruelty, the sexual violence —only through the filter of Bone trying to survive. It took me a long time to get it right. About 10 years.”

The Showtime movie based on the book, directed by Anjelica Huston and starring Jennifer Jason Leigh, was funded by Ted Turner, but he pronounced it too graphic to be shown on his network. In several states, Bastard has been banned from classrooms and school libraries. Most recently, the book was distributed to Maine high-schoolers by private citizens, in protest of the Maine Supreme Court’s November 1997 decision that allowed the schools to continue their ban of the book.

Dorothy Allison was born in 1949 in Greenville, South Carolina, to a fourteen-year-old unwed mother. The only father figure she ever knew was a violently abusive man who used her mother’s desperate desire for respectability to tie the terrified family to him. Though it was Allison’s mother who placed her daughter in these precarious situations by not challenging her husband, Allison credits her as an inspiration. While the Greenville community disdained Allison for being poor and illegitimate, Allison’s mother insisted her child was bright. She kept a jar of money she called the college fund, and though she had to empty it on several occasions and Allison’s college was paid for by a National Merit Scholarship, just the presence of that jar convinced Allison that she had a right to excel.

The first of her family to graduate high school, Allison went on to get a bachelor’s degree from Florida Presbyterian College and a master’s from New York’s School of Social Research. Allison credits emerging feminism with much of her redemption. Suddenly, getting angry did not make her a misfit, and the movement gave her the strength to reclaim her self from years of put downs and abuse.

When she began her writing career, Allison kept close to the gay and feminist presses, distrusting the establishment and believing that “literature was written by men, judged by men.” In 1988 Firebrand Press published Trash, a book of short stories, that started to win Allison notice. This was followed by The Women Who Hate Me: Poetry, 1980-1990, which secured Allison’s stature as a respected talent within the gay and lesbian community.

When Bastard Out of Carolina was published by Dutton in 1992, Allison achieved mainstream success. Bastard was greeted with rave reviews from the Village Voice, the San Francisco Chronicle, and The New York Times Book Review, and nominated for the National Book Award. Allison returned to a small press with Skin: Talking About Sex, Class and Literature, a critically acclaimed collection of essays.

In 1995, she published a short memoir, Two or Three Things I Know for Sure, using text and family photographs. In March 1998, Allison’s most ambitious work yet was released. Cavedweller is an epic novel that chronicles the trials and victories of four strong women and the opportunities they wrest from the unforgiving terrain of small town Georgia.

In addition to her own books, Allison has contributed to many publications, ranging from The New York Times to Harpers and Allure. Allison lives in Northern California with her partner and their son, and continues to pursue “the thing all writers want—for the world to break open in response to my story…The same thing I have always wanted.”

Learn More About Bastard Out of Carolina
print

The Accidental Tourist
Back to Top