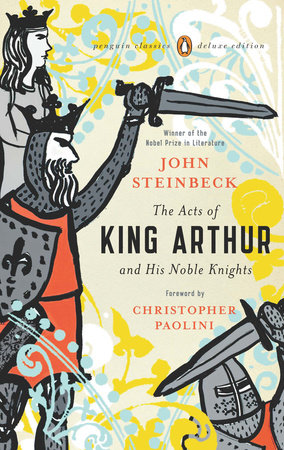 The first book that John Steinbeck ever loved was Sir Thomas Malory’s fifteenth-century narrative of Arthurian legends, Le Morte D’Arthur, and even later in his life, that book continued to be a major influence on both Steinbeck’s worldview and his creative output. In the latter half of the 1950s, having already won lasting fame as the author of Of Mice and Men, The Grapes of Wrath, and East of Eden, Steinbeck was seized by a powerful urge to return to his first great inspiration. Setting aside the American themes and places that he explored in his immortal fiction, he took up the mammoth task of retelling Malory’s stories from a more modern point of view. Steinbeck eventually became so absorbed in this new, exciting work that he thought it might become his crowning achievement. Early in 1959, he told an interviewer that he had “learned to write and [would] not write anything more—just a history of King Arthur.”

What began for Steinbeck as an apparently straightforward work of translation and revision acquired a life of its own, as he strove not only to give new life to Malory but also to use the tales of King Arthur as a medium for his own expression. He traveled to England and Italy and read, by his own count, “literally hundreds of books on the Middle Ages.” In a strange but undeniable fashion, the book that was to become The Acts of King Arthur and His Noble Knights transformed its author himself into a modern version of a questing knight endlessly pursuing the Holy Grail of his story. In the end, Steinbeck was able to complete drafts of only seven chapters of the book that he had hoped would be “the best work of my life and the most satisfying.” Steinbeck’s grail finally eluded him.

Nevertheless, his unfinished manuscript, published in 1976, eight years after his death, has been recognized as a work of strange, if imperfect power—both as a vigorous and keenly seen reworking of Malory’s tales and as a significant fable for modern times. The Acts of King Arthur and His Noble Knights speaks eloquently of honor and gallantry, deception and betrayal. While resurrecting the medieval mind of Malory and the legends of ancient Britain, it also comments between the lines on the anxieties and anomie of modern living. As Steinbeck wrote to Jacqueline Kennedy, “The fifteenth century [Malory’s era] and our own have so much in common—loss of authority, loss of gods, loss of heroes, and loss of lovely pride. . . . At our best we live by the legend.” In The Acts of King Arthur and His Noble Knights, Steinbeck restores the glorious spirit of this bygone age.

The Acts of King Arthur and His Noble Knights tells both familiar stories like “The Sword in the Stone” and less well-known like the fatalistic “Knight with Two Swords.” It gives us the shining figures of Arthur and Lancelot and the darker specter of Morgan le Fay. It revives the magic of Merlin and the charm of Guinevere. Perhaps most important, it gives us the reflections of a Nobel– and Pulitzer Prize–winning writer on the mysteries of good and evil. Elucidated by a foreword by Christopher Paolini, the acclaimed author of Eragon, and supplemented by a fine appendix of selections from Steinbeck’s letters, which chronicle both the coming together and the eventual unraveling of his project, The Acts of King Arthur and His Noble Knights is an irresistible volume both for those who wish to know King Arthur and those who wish to recover a lost piece of themselves.

One of the greatest American writers, and one who had an innate understanding of the strength of the human spirit, John Steinbeck, born in Salinas, California, in 1902, grew up in a fertile agricultural valley, about twenty-five miles from the Pacific coast. Both the valley and the coast would serve as settings for some of his best fiction. In 1919 he went to Stanford University, where he intermittently enrolled in literature and writing courses until he left in 1925 without taking a degree. During the next five years he supported himself as a laborer and journalist in New York City, all the time working on his first novel, Cup of Gold (1929).

After marriage and a move to Pacific Grove, he published two California books, The Pastures of Heaven (1932) and To a God Unknown (1933), and worked on short stories later collected in The Long Valley (1938). Popular success and financial security came only with Tortilla Flat (1935), stories about Monterey’s paisanos. A ceaseless experimenter throughout his career, Steinbeck changed courses regularly. Three powerful novels of the late 1930s focused on the California laboring class: In Dubious Battle (1936), Of Mice and Men (1937), and the book considered by many his finest, The Grapes of Wrath (1939). The Grapes of Wrath won both the National Book Award and the Pulitzer Prize in 1939.

Early in the 1940s, Steinbeck became a filmmaker with The Forgotten Village (1941) and a serious student of marine biology with Sea of Cortez (1941). He devoted his services to the war, writing Bombs Away (1942) and the controversial play-novelette The Moon Is Down (1942). Cannery Row (1945), The Wayward Bus (1948), another experimental drama, Burning Bright (1950), and The Log from the Sea of Cortez (1951) preceded publication of the monumental East of Eden (1952), an ambitious saga of the Salinas Valley and his own family’s history.

Steinbeck received the Nobel Prize in Literature in 1962 and in 1964 he was presented with the United States Medal of Freedom by President Lyndon B. Johnson. Steinbeck died in New York in 1968. Today, more than thirty years after his death, he remains one of America’s greatest writers and cultural figures.

The Aeneid of Virgil

The Narrative of Arthur Gordon Pym of Nantucket
Back to Top