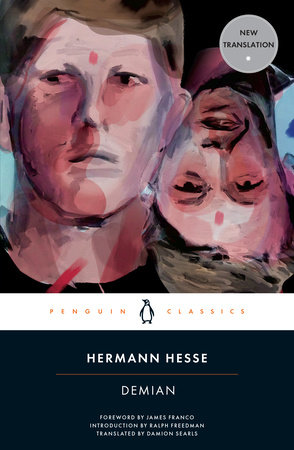 His very name combines the forces of evil (“Sin”) and the power of light (“clair”). As he moves slowly from innocent youth to knowing adulthood, Emil Sinclair-the hero and narrator of Hermann Hesse’s novel Demian-moves perpetually between the temptations of the flesh and the promise of radical religious redemption. His first brush with evil comes at the hands of a wicked older boy, Franz Kromer, who assumes despotic control over Sinclair’s life by threatening to divulge an unbearable secret. On the verge of despair, Sinclair is rescued by an aloof but charismatic schoolmate named Max Demian, whose sharp intelligence and revolutionary ideas about God and morality lure the younger boy into uncharted psychological territory. As their friendship deepens, Demian assumes an ambiguous role of both mentor and tempter, prompting Sinclair to question every value that he has heretofore accepted and gradually to reject the safe but stultifying world that Sinclair’s parents have created for him. Sometimes concretely realistic, sometimes almost hallucinatory in its strangeness, Sinclair’s journey to adulthood unfolds in astonishing fashion as he experiences the depths of guilt and bewilderment and the pinnacles of spiritual ecstasy. Yet just as Sinclair appears to be reaching a state of moral completeness and spiritual satisfaction, his country is thrown into a catastrophic war, from which nothing he has come to value is likely to emerge unscathed.

Along his winding path to maturity, Sinclair is shaped by a fascinating variety of friends and mentors: Beatrice, a radiant girl whom he views from afar and who comes to embody his holiest ideals; Alfons Beck, a dissolute young man who leads Sinclair down the path of corruption; Pistorius, a brilliant organist whose music and philosophic lessons mark a turning point in Sinclair’s thoughts and feelings; and Demian’s mother Eva, who appears to Sinclair as both a present-day Madonna and a primitive seductress. Their influences combine to lead Sinclair to a startling but seemingly inescapable conclusion: that the only true goal of life is self-exploration, and that every person must resolutely discover his or her own destiny, whether that pursuit turns him into a prophet or a madman, a poet or a criminal. The road may lead anywhere, so long as it takes the traveler forward.

Revolutionary in its philosophy, ruthless in its investigation of the human spirit, Demian has long been recognized as one of the great novels about moral education and mis-education, a unique chronicle of one person’s trip on the winding, treacherous road toward maturity. Now, thanks to a bold but sensitive new translation by Damion Searls, readers can now view the world of Demian in an unprecedented light. Through Hesse’s timeless classic, they can discover in Emil Sinclair, in Max Demian, and most importantly in themselves, the miracle and uniqueness of selfhood in the modern world.

Born in Württemburg, Germany, in 1877, Hermann Hesse was twenty when he began a career of fiction writing that spanned nearly forty-five years. Renowned for his insights into human psychology and his advocacy of expansive self-exploration, Hesse remains one of the most frequently translated and most avidly read German writers of the twentieth century. His world-famous novels include Demian, Klingsor’s Last Summer, Siddhartha, Steppenwolf, and The Glass Bead Game. In 1946, Hesse was honored with both the Goethe Prize (arguably Germany’s most prestigious cultural prize) and the Nobel Prize for Literature. Hermann Hesse died in Switzerland in 1962.

Plays
Back to Top