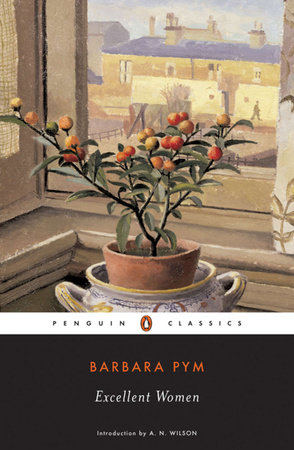 INTRODUCTION
Barbara Pym’s Excellent Women is a novel about a woman named Mildred Lathbury who is living in London in the 1950s. A self-proclaimed spinster, virtuous almost to a fault, intelligent, and entirely without family, Mildred is alone and content to be so. As the story begins, she is leading a quiet life of churchgoing and part-time charity work, with the Malorys—Julian, a pastor and single man, and his frazzled, sweet sister, Winifred—as her dearest friends.

However, as Mildred herself notes, “An unmarried woman, just over thirty, who lives alone and has no apparent ties, must expect to find herself involved or interested in other people’s business” (p. 5). And so upon her too-comfortable existence enter a host of unsettling and decidedly unvirtuous characters: the Napiers—Helena and Rockingham—a glamorous and unconventional couple who become Mildred’s housemates; Allegra Gray, the calculating widow who destabilizes Mildred’s relationship with the Malorys; and Everard Bone, the aloof anthropologist who befriends Mildred against all of her expectations.

The Napiers’ marriage is on the rocks, due to Helena’s fierce dedication to her anthropological fieldwork and to dashing Rockingham’s effortless romancing of every woman he encounters. As their go-between and confidant, Mildred suddenly finds herself swept into their milieu of romantic drama and self-important science. Two love triangles develop: between the Napiers and Everard Bone, and between Allegra Gray, Julian Malory, and, to her surprise, Mildred herself. Even as she expresses her intent to preserve her independence, a number of potential suitors present themselves. The more Mildred tries to extricate herself, the more involved she becomes, as each of her friends depends on her to sort out the unflattering messes they make for themselves.

Yet behind her plain and patient facade, capable Mildred turns out to be a more ruthless social observer than even the anthropologists whose job it is to “study man.” Excellent Women is a romantic comedy that makes the decidedly unromantic suggestion that its narrator might be happiest alone. Mildred’s wit and independence subvert the stereotype that “excellent women” are dull. Set against the backdrop of postwar London, a city sorting through the disruptions of wartime bombing, the beginnings of feminism, and the end of colonialism, the novel offers effortless social critique that is as entertaining as it is enlightening.

English novelist Barbara Pym was born in 1913 in Shropshire. She was educated at Oxford and for many years worked at the African Institute in London. She enjoyed initial success in her writing career but then for over a decade was unable to find a publisher for her novels. After being called “the most underrated writer of the century” by Philip Larkin, there was a resurgence of critical and popular interest in her work in the final years of her life. She published six novels between 1950 and 1961, including Excellent Women in 1952, and four additional works after 1977. Among these later works is Quartet in Autumn, which was nominated for the Booker Prize. Pym died in 1980 at her home in Oxfordshire.

How It All Began

Love in a Cold Climate

The Sea, the Sea
Back to Top