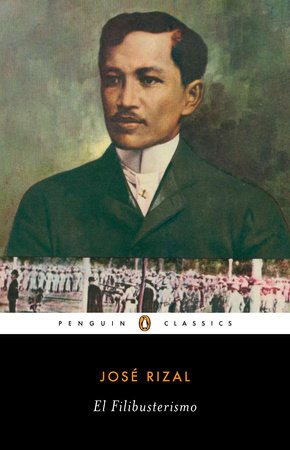 The second and last novel completed by José Rizal (though he left behind the unfinished manuscript of a third one), El Filibusterismo is a sequel to Noli Me Tangere. A dark, brooding, at times satirical novel of revenge, unfulfilled love, and tragedy, the Fili (as it is popularly referred to) still has as its protagonist Juan Crisóstomo Ibarra. Thirteen years older, his idealism and youthful dreams shattered, and taking advantage of the belief that he died at the end of Noli Me Tangere, he is disguised as Simoun, an enormously wealthy and mysterious jeweler who has gained the confidence of the colony’s governor-general.

A number of other characters from the Noli reappear, among them: Basilio, whose mother and younger brother Crispin met tragic ends; Father Salví, the devious former curate of San Diego responsible for Crispin’s death, and who had lusted after Ibarra’s love, María Clara; the idealistic schoolmaster from San Diego; Captain Tiago, the wealthy widower and legal father of María Clara; and Doña Victorina de Espadaña and her Spanish husband, the faux doctor Tiburcio, now hiding from her with the indio priest Father Florentino at his remote parish on the Pacific coast.

Where Ibarra had argued eloquently against violence to reform Manila society, Simoun is eager to foment it in order to get his revenge: against Father Salví, and against the Spanish colonial state. He hopes to liberate the love of his life, María Clara, from her suffocating life as a cloistered nun, and the islands from the tyranny of Spain. As confidant to the governor-general, he advises him in such a manner as to make the state even more oppressive, hoping thereby to force the masses to revolt. Simoun has a few conspirators, such as the schoolmaster and a Chinese merchant, Quiroga, who aid him in planning terroristic acts. In sum, Simoun has become an agent provocateur on a grand scale.

Basilio, now a young man, has risen from poverty to become Captain Tiago’s charge. Close to acquiring his medical degree, he is pledged to Julí, the beautiful daughter of Cabesang Tales, a prosperous farmer whose land is taken away from him by the friars. Tales subsequently murders his oppressors, turns to banditry, and becomes the scourge of the countryside.

In contrast to Simoun’s path of armed revolution, a group of university students—among them, Isagani, Peláez, and Makaraig—push for the founding of an academy devoted to teaching Castilian, in line with a decree from Madrid. Opposed even to such a benign reform, the friars manage to co-opt the plan. Subsequently the students are accused of being behind flyers that call for rebellion against the state. Most observers see the hand of the friars in this whole affair, which results in the incarceration of the student leaders, even of Basilio, though he was not involved, and the break-up between Isagani and the beauteous Paulita Gómez, who agrees to marry the wealthy Peláez, much to the delight of Doña Victorina, who has favored him all along.

In the meantime, Tiago, addicted to opium, dies of a drug overdose while attended to by Father Irene. A meager inheritance is all that is given to Basilio and all the incarcerated students are soon released except for him. Julí approaches Father Camorra to request him to obtain Basilio’s release. The friar attempts to rape her but she commits suicide rather than submit to his lustful designs. Released from prison, with Julí dead and his prospects considerably dimmed, Basilio, one of the few who knows who Simoun really is, reluctantly becomes a part of the latter’s plot.

The lavish wedding celebration is to be held at the former residence of Captain Tiago, purchased by Don Timoteo Peláez, the bridegroom’s father. Simoun has mined the residence, so it will blow up once a fancy lamp—packed with nitroglycerin, it is Simoun’s wedding gift—has its wick lit. The resulting assassination of the social and political elite gathered at the feast will be the signal for armed uprising. But Isagani, informed by Basilio of what will happen, rushes into the house, snatches the lamp, and throws it into the river, and in the confusion is able to escape.

The planned uprising is aborted, and Simoun’s true identity is finally revealed, partly through a note he leaves for Father Salví at the feast. Wounded, he eludes capture and manages to seek refuge at Father Florentino’s residence. There, he commits suicide but not before revealing to the priest what he has wrought. He leaves behind his case of jewels, which the good father throws into the sea, with the injunction that the precious stones yield themselves only when the country needs them for a “holy, sublime reason” (p. 328).

Born on June 19, 1861, José Rizal was from an upper-class Filipino family. His mother, Teodora Alonso, a highly educated woman, exerted a powerful influence on his intellectual development. He would grow up to be a brilliant polymath, doctor, fencer, essayist, and novelist, among other things.

By the late nineteenth century, the Spanish empire was in irreversible decline. Spain had ruled the islands since 1565, except for a brief hiatus when the British occupied them in 1762. The colonial government was unresponsive and often cruel, with the religious establishment wielding as much power as the state. Clerical abuses, European ideas of liberalism, and growing international trade fueled a burgeoning national consciousness. For Rizal and his generation, the 1872 Cavite Mutiny, in which three native priests were accused of treason and publicly executed, provided both inspiration and a cautionary tale.

Educated at the Jesuit-run Ateneo de Manila and the Dominican University of Santo Tomas in Manila, Rizal left for Spain in 1882, where he studied medicine and the liberal arts, with further studies in Paris and Heidelberg. The charismatic Rizal quickly became a leading light of the Propaganda Movement—Filipino expatriates advocating, through its newspaper, La Solidaridad, various reforms such as the integration of the Philippines as a province of Spain, representation in the Cortes (the Spanish parliament), the Filipinization of the clergy, and equality of Filipinos and Spaniards before the law. To Rizal, the main impediment to reform lay not so much with the civil government but with the reactionary and powerful Franciscan, Augustinian, and Dominican friars, who constituted a state within a state.

In 1887, he published his first novel, Noli Me Tangere, written in Spanish, a searing indictment of friar abuse as well as of colonial rule’s shortcomings. That same year, he returned to Manila, where the Noli had been banned and its author now hated intensely by the friars. In 1888, he went to Europe once more, and there wrote the sequel, El Filibusterismo (The Subversive), published in 1891. In addition, he annotated an edition of Antonio Morga’s Sucesos de las Islas Filipinas, showing that the Philippines had had a long history before the advent of the Spaniards. Rizal returned to Manila in 1892 and founded a reform society, La Liga Filipina, before being exiled to Dapitan, in Mindanao, Southern Philippines. There he devoted himself to scientific research and public works. Well-known as an ophthalmologist, he was visited by an English patient, accompanied by his ward, Josephine Bracken, who would be his last and most serious romantic involvement.

In August of 1896, the Katipunan, a nationalist secret society, launched the revolution against Spain. Its leaders venerated Rizal and tried to persuade him to their cause. He refused, convinced that the time was not yet ripe for armed struggle. In the meantime he volunteered to serve as a doctor with the Spanish forces fighting against Cuban revolutionaries. En route, Rizal was arrested and subjected to a mock trial in Manila by the authorities although he had nothing to do with the revolution. Found guilty, he was, at the age of thirty-five, shot at dawn on December 30, 1896. On the eve of his execution, Rizal pennedMi Ultimo Adios (“My Last Farewell”), considered a masterpiece of nineteenth-century Spanish verse.

Rizal’s martyrdom only intensified the ultimately successful fight for independence from Spain. Because of his role in shaping his country’s destiny, José Rizal is often described as the “First Filipino” and has since served as an inspiration to countless nationalists and intellectuals.

Luis H. Francia was born and grew up in Manila, where he obtained his B.A. in humanities from the Ateneo de Manila University—whose most distinguished alumnus was José Rizal. He teaches Filipino language and culture at the Asian/Pacific/American Studies program of New York University, Asian-American literature at Hunter College, as well as creative writing at the City University of Hong Kong. He has taught at Sarah Lawrence College and the University of Hawai’i at Manoa.

He has written several books, the most recent one being The Beauty of Ghosts (2010), a collection of poems about the Filipino immigrant experience in the United States. Other publications include A History of the Philippines: From Indios Bravos to Filipinos (2010); Museum of Absences, a collection of poems (2004); and the semiautobiographical Eye of the Fish: A Personal Archipelago (2001), winner of both the 2002 PEN Open Book and the 2002 Asian American Writers Workshop Literary awards. He is the editor of Brown River, White Ocean (1993), an anthology of Philippine literature in English; co-editor of the literary anthology, Flippin’: Filipinos on America (1996); and of Vestiges of War (2002), an anthology of creative and scholarly works dealing with the 1899 Philippine-American War.

He is included in several collections, among them the poetry anthology Language for a New Century (2008), and the Library of America’s Four Centuries of Immigrant Writing (2009). He and his wife, art historian and curator Midori Yamamura, live in Jackson Heights in New York City.

At Play in the Fields of the Lord

Child of All Nations

The Master of Petersburg

Barabbas
Back to Top