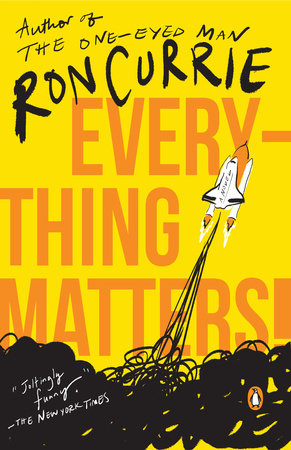 Most people experience a sense of existential dread at some point in their lives, a vague and often unarticulated anxiety about the purpose of struggle in the face of inevitable death. But for Junior Thibodeau, the protagonist of Everything Matters!, that dread is anything but vague; and it is fully articulated from the moment he is born. Junior is gifted and cursed with the certain knowledge of how and when the world will end, and that knowledge forces him to directly confront the great philosophical questions that have always been the abstract, if profoundly important, preoccupations of the human mind. What is morality? What is love? Does anything I do matter?

Author Ron Currie, Jr. seamlessly blends science fiction with domestic drama. Junior’s unique dilemma is set against a small New England town and a family with a legacy of alcoholism and abuse. The narrative switches perspectives, from Junior’s family members and his lifelong love, Amy, to Junior himself, to the omniscient and unexplained voice in Junior’s brain. We learn that the Thibodeau clan is resilient and loving despite each member’s individual trauma or grief, and though that love is expressed torturously or not at all, it is strong enough to push the adult Junior to incredible heights of self-sacrifice and moral reckoning.

Currie employs literary devices not usually found in the same book: multiple narrators and dual endings; international espionage; and a sense of suspense that builds throughout the book despite a certain and inevitable conclusion announced in the first chapter. The nature and function of important characters switch unexpectedly, often as the result of an eruption of the violence that is always hovering around the edges of their lives. But perhaps the most surprising contradiction in this novel is that in grappling with the futility of existence and the certainty of death, Junior ultimately finds that despite all logic, everything—love, grief, joy, pain, and the most mundane activities—does, in fact, matter.

ABOUT RON CURRIE, JR.
Ron Currie, Jr.’s first book, God Is Dead, won the Young Lions Fiction Award from the New York Public Library and the Addison M. Metcalf Award from the American Academy of Arts and Letters. Everything Matters! will be translated into a dozen languages, and is a July 2009 Indie Next Pick and Amazon Best of June 2009 selection.

He lives in Waterville, Maine.

A CONVERSATION WITH RON CURRIE, JR.

Q. Who or what is the “voice” in Junior’s head? Did you ever want to reveal its identity, or did you always plan to leave that question unanswered?

I deliberately left the question open. It never seemed a good idea for a reveal—the story is busy enough, and to assign a name to the presence in Junior’s head would compromise its power as metaphor. Plus I like leaving big things up to the reader to decide for him- or herself. Too much of what I read lately panders and handholds, and as a consequence I think some readers have become conditioned to want to have every last detail of a story explained ad nauseam. There’s real, sublime pleasure in being allowed to filter a story through your own consciousness and fill in key blanks for yourself.

Q. How did the idea for this novel originally come to you?

Enough time has passed since I wrote the first few chapters and set it aside to write God Is Dead—six or seven years—that it’s awfully hard to say. I do know that originally the concept was for a sort of instruction manual written in the second person. The idea was to ape the style and format of old books of etiquette. But that was a horrible idea, turns out. Imagine having to slog through three or four hundred pages of nothing but that. The conceit would fall completely apart. So I knew I wanted to salvage the original approach, but there had to be another way to relate the story of these peoples’ lives that was more emotionally immediate. This was when I decided to write from alternating points of view in the first person.

Q. Did you ever write or imagine a draft in which Junior actually succeeds in stopping the Destroyer of Worlds, actually saving the world?

I considered it, of course, but that would have been a cop-out. The whole point is that Junior needs to learn to accept and live with the eventual end of his life and everything he loves. Further, he needs to learn that no amount of struggling against that eventual doom will result in a different outcome, except that when it comes he’ll be alone and spent and heartbroken. Really Junior is sort of immature in his obsession with the Destroyer of Worlds, because the only difference between him and everyone else on the planet—each of whom comes to understand at some point in their life that we’re all hurtling inexorably toward oblivion—is that he knows his expiration date. And it cripples him. Most of us move forward in the face of our own certain knowledge, frightening and discouraging as it is.

Q. There is a strain of violence throughout the book: children suffer physical abuse, adults are mutilated, graphically described illness strikes people of all ages. What is the function of violence in this story?

The same function it has in real life—it’s a tremendous force that results in dramatic changes in both a person’s life and personality. Violence is partly responsible for turning John Sr. into the unflappable family man he is throughout the story. The memory of violence causes Debbie to descend into alcoholism so deeply that it resembles catatonia. Violence committed against Amy grants her the defiance and determination that are the hallmarks of her makeup, particularly when she’s faced with difficult choices or hardship.

Q. Considering the nature of your characters’ dilemmas, they seem surprisingly uninterested in religion. And your last book was titled God Is Dead. Why no mention of religion here?

Well, Debbie is devout, even at the apex of her addiction. I think the other characters’ lack of faith and piety reflect the sort of casually theistic society America seems to have become (shrill right-wingers notwithstanding; they’re still a minority, no matter how vocal). Most people I know sort of believe in god, but god as an indefinite concept, perhaps not even an entity, and certainly not a bearded man in the sky. A society in which one can choose a religion by flipping through the yellow pages is bound to spawn these types of people in large numbers, and the book reflects that.

Q. There are a number of references in your book to 1980s pop culture. Do you think the touchstones of that era have a special relevance to this story and the timeless questions it asks?

I’m not sure about a special relevance. Certainly because the childhood of the main character occurs during the 80’s, it makes sense that we’d see things like cocaine and Spuds MacKenzie popping up here and there. The eighties spared no one, after all, not even Bob Dylan. More than the popular culture, though, I think the dark underside of the go-go eighties, of Reagan’s America, where huge swathes of people (including the Thibodeaus) were left behind financially while a small segment of the population was getting grotesquely wealthy—that certainly has a special relevance to the story.

Q. Certain events of the 80s and 90s—the Challenger explosion, the Oklahoma City bombing—are important turning points in Junior’s young life. Did these particular events affect you in a profound way?

Oh, sure. I was preternaturally sensitive to the big events of my childhood, though I had no better understanding of them than the average kid, I don’t think. I can remember planning a fort in the woods with a friend of mine for when the Libyans invaded circa 1986. This was around the time of the pissing match between Reagan and Gaddafi (remember how no one could reach a consensus on how to spell his name?) over international waters off the Libyan coast. So there we were, convinced the Libyans were going to invade the United States, going over plans on the playground for a sort of fallback shelter in the woods. There was a Rambo knife involved, too, if memory serves.

Q. Junior’s brother Rodney transforms from a “smart, and cunning, and mischievous” nemesis to a simple and guileless friend. His ignorant bliss contrasts sharply with Junior’s tortured brilliance. Why did you choose these dichotomies in creating Rodney’s character and portraying his relationship with Junior?

Rodney functions as Junior’s foil throughout their lives. First, he’s the typical older brother—bullying, jealous of the divided attentions of their mother. After the brain injury, Rodney’s happiness and serenity, when contrasted with Junior’s desperate unhappiness, serve as an omnipresent reminder that, as Junior himself says, “Smart’s got nothing to do with it.”

Q. The style of punctuation changes with the narrator throughout the book—sometimes quotation marks are used in the dialogue, sometimes paragraph breaks, and sometimes nothing at all. Was that something you decided on when you began writing the novel? Why?

It’s a simple and effective way to convey voice. Also pretty dangerous, but I like taking chances. That’s the sort of fiction I enjoy reading: the kind of writing that isn’t afraid to crash and burn. All these quiet, austere, studiously perfect narratives I see celebrated time and again—they’re fine for what they are, but I don’t get a sense that even the authors felt they were necessary. There’s no risk, no anima.

Q. We only hear from Debbie, Junior’s mother, in the first half of the book, after which her alcoholism and depression are chronicled by those around her. Why does she fall silent?

After a certain point early in the story, Debbie has no inner monologue that would make sense on the page, let alone move the story forward. She is way beyond an unreliable narrator. She’s in a sort of stasis, and so in order for the reader to understand what’s going on with her he has to be informed through others. By the time Debbie is well enough to speak for herself again, that part of the story is over.


Learn More About Everything Matters!
print

The Brief History of the Dead
Kevin Brockmeier

The Office of Mercy
Ariel Djanikian

The Winemaker’s Daughter
Timothy Egan
Back to Top