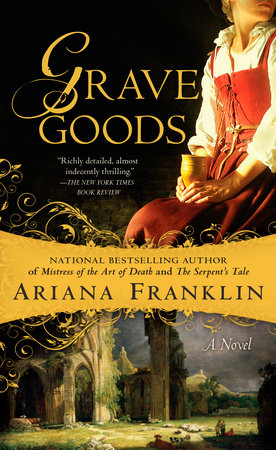 INTRODUCTION
As established in Ariana Franklin’s previous novels Mistress of the Art of Death and The Serpent’s Tale, Vesuvia Adelia Rachel Ortese Aguilar is no ordinary medieval woman. Trained at the School of Medicine in Salerno and practiced in the nascent science of forensics, she is called by King Henry II to solve what may be the greatest mystery of the age. Skeletons have turned up in a sacred burial spot in Glastonbury, and all arrows point to the possibility that they are the remains of King Arthur and Queen Guinevere. If so, it means the end of a raison d’être for the Celt resistance and a Phoenix-like rise for fire-ravaged Glastonbury. Adelia knows she has to maintain professionalism despite the pressures that come with her biggest case yet, but at what cost to her career, her loved ones, and her own sanity? Hard truth is the only flag to fight under…this is her credo, and fight she must—against corrupt churchmen, desperate townspeople clinging to lies, a highway terrorist called Wolf, and forces of evil that dwell in the narrowest of minds and bitterest of hearts.
ABOUT ARIANA FRANKLIN

Ariana Franklin, author of City of Shadows, is the pen name of British writer Diana Norman. A former journalist, Norman has written several critically acclaimed biographies and historical novels. She lives in Hertfordshire, England, with her husband, the film critic Barry Norman.

Dark Matter
Back to Top