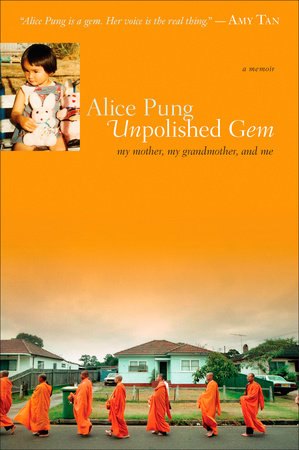 When Alice Pung’s family survives the killing fields of Cambodia and escapes the poverty of a Thai refugee camp, arriving in Australia with the clothes on their backs and little else, they think themselves blessed with good fortune. And they are—the Australian government provides them with housing and food, and soon Alice’s father finds a job that will support him, his mother, and his very pregnant wife. It is the 1980s, and little Alice is born into her family’s newfound luck and prosperity.

But economic and social prosperity come with a price—not one exacted by their new host, Australia, but one that they impose upon themselves. Adapting to life in this wealthy new land is more difficult than they imagine, as they learn to deal with displacement and life as outsiders, even in a community filled with fellow immigrants. Alice’s mother and her paternal grandmother face a special adversity—living with each other. And caught in the middle of it all is Alice, who realizes, perhaps better than anyone, the contradiction and complexity that come with living a dual life: the life of an Asian and the life of an Australian.

Funny, charming, moving, and unfailingly honest, Alice Pung’s memoir Unpolished Gem captures the best and worst of life in a new country. Her perspective of three generations—her grandmother’s, her mother’s, and her own—presents moments of great humor as well as moments of acute emotional pain. In the end, her tale of three women surviving a new land—and each other—is enlightening and memorable, reaffirming for us the indomitable, lasting character and strength of family.

Alice Pung was born in Australia in 1981, one month after her parents migrated from Cambodia. She is now a Melbourne-based writer and lawyer. Unpolished Gem is her first book.

A CONVERSATION WITH ALICE PUNG

Q. How does your family feel about your memoir?

Firstly, my mother can’t read anything I write. People then often ask me, ‘well why don’t you read it to her?’ That is a very reasonable question, but among other things, Unpolished Gem is a book about the things in life that matter more than words.

It is also a story about being illiterate, and about the importance of the non-verbal truths in life. Even if I were able to read it to my mother, she would think it were a waste of time, as she spends her time in productive work; not telling stories. But ironically, telling stories – and telling didactic stories – is what she does best. I learned how to write from a woman who could not read and write – because she taught me how to see the world, beyond the attachment of words.

My father, on the other hand, has read my book about three times – each time armed with a heavy dictionary, as English is of course not his first language. He speaks Teochew, Khmer, French, Cantonese, Mandarin and English (my mother also speaks five languages – unfortunately none of them are English). Growing up my father never censored my writing, and always gave me a sense of liberty and security to speak or write what was on my mind. My father is one of those rare sorts of parents who believed – and still believes – that one’s children can teach you much about life.

My parents are very different – my mother the strong practical keeper of didactic stories, my father the silent but reflective thinker; but they are both very proud of me. Writing my book – and it is a book that contains many family secrets and discards the obsession with face-saving – has made me realize how unconditional my parents’ love is.

Q. In the memoir, you say to Michael that you like the way studying law allows you to help your community. Can, or does, your writing serve in the same way? What motivated you to begin writing and publishing in the first place?

There is a strong element of saving face in our community, and sometimes this is to the detriment of genuine compassion and understanding. So, although I admittedly did tell certain stories that weren’t the most fitting to the migrant narratives of ‘success’, I thought it more important to tell the truth – that sometimes people can toil and toil for two decades in a back shed and lock themselves out of a language for the sake of their children’s futures, that when Asian high achievers have meltdowns they sometimes quietly implode rather than dramatically explode, and that things that happen to us in life are cyclic, not linear. Sometimes what you think is the end really is the beginning.

My father is an amazing man – he survived the Killing Fields and still retains a humour and optimism about life. So first and foremost, I wanted to inject my writing with humour. In the end, the most touching realization to emerge out of this book came from Michael, my former boyfriend in the story. After reading my book, he said to me: “Alice, this book is a love letter to your community.” And this is true.

Q. You’re also the editor of Growing Up Asian in Australia, a collection of essays and stories. How does this book work as a companion piece or supplement to your full-length Unpolished Gem?

Q. What are you working on currently?

I am trying to write my next book. I generally start off with a feeling – an emotional truth I want to convey, and go from there. I end up in unusual and unexpected places – but somehow in retrospect, they seem exactly where the writing should take me. Sometimes you have to just let go and let the story carry you where it needs to. The expression ‘taking you out for a ride’ has really shonky connotations, but sometimes it is just nice to be taken out for a ride!

Younger Than That Now
Ruth Williams and Jeff Durstewitz

A Leaf In The Bitter Wind
Ting-Xing Ye

The Story of Chicago May
Nuala O’Faolain

The Other Side: Growing up Italian in America
Vincent Panella

Ma, Now I’m Goin Up in the World
Martha Long

A Sense of Belonging
Mel Martinez

The Most Famous Writer Who Ever Lived
Tom Shroder

What I Know for Sure
Tavis Smiley

In This Dark House
Louise Kehoe

The Fly Swatter
Nicholas Dawidoff
Back to Top