This Is Where I Leave You Reader’s Guide 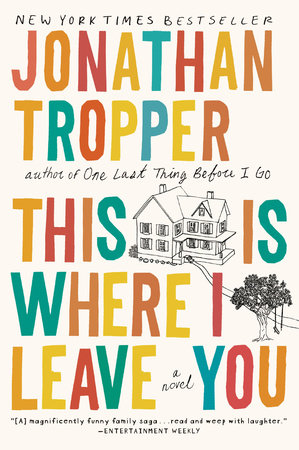 This Is Where I Leave You Reader’s Guide

print
This Is Where I Leave You Reader’s Guide

Within the space of a few weeks, Judd Foxman has learned about his wife’s fourteen month affair with his misogynist, radio shock-jock boss – only because he walked in on them having sex in his bedroom — and that his emotionally-distant, cancer-stricken father has finally passed away. And now, Judd discovers, he’s being asked to sit shiva, and mourn according to the Hebrew custom for seven uninterrupted days with the remaining members of his highly dysfunctional family.

Between his older brother Paul’s decades-long resentment, his sister-in-law’s hysterics over her infertility, his younger brother’s pre-midlife crisis with a much older woman, his sardonic older sister’s callous, absentee husband, his mother’s age-inappropriate manner of dressing, and – the reason they’re all gathered together – his father’s death, Judd barely has time to fixate on his own disaster of a marriage and his lack of a distinct and promising future. And yet he does fixate on it, especially when his soon-to-be-ex wife shows up and announces that she’s pregnant, and that the child is his.

With deftly wrought prose and marvelous comedic sense, author Jonathan Tropper brings a grieving Jewish family vividly to life. As day after day of the shiva passes, the Foxman family uncover years of repressed bitterness, confusion, anger, and finally, love for one another. This Is Where I Leave You is an engaging and moving novel, examining the reasons behind our most loving and unloving actions, and exploring our complicated, contradictory relationships with those we call our family.

Jonathan Tropper is the author of How to Talk to a Widower, Everything Changes, The Book of Joe, andPlan B. He lives with his family in Westchester, New York, where he teaches writing at Manhattanville College. He is currently adapting This Is Where I Leave You as a feature film for Warner Brothers Studios.

A CONVERSATION WITH JONATHAN TROPPER

Q. What inspired you to write a book about a fairly secular family observing a traditional Hebrew mourning ritual? Did this situation or premise motivate you to write the book, or was it Judd Foxman’s distinctive voice that developed first?

This novel was always first and foremost Judd’s book. As a matter of fact, I was writing his story before the idea of the shiva ever occurred to me. I wanted to tell the story of a man who loses everything that he thought defined who he was; his marriage, his career, his home. For me, it was going to be a very intimate look at one man’s rock bottom. But then, around a hundred pages in, I wrote a chapter where Judd goes to see his nuclear family – for his father’s seventieth birthday, actually. And in writing Judd’s siblings and mother, I found that the novel came alive in a way it hadn’t up until then. So I decided I had to turn the novel over to them. But what would make a guy in Judd’s situation go spend any significant amount of time with his grown siblings in his mother’s home. And that’s when I came up with the idea of the shiva. All that was left was to kill off his father and convert them all to Judaism.

Q. Despite its serious and emotional subjects, the book is filled with comedic moments that can make the reader laugh out loud. Which part did you enjoy writing the most? Do you, generally, find the humorous moments or the somber moments in your fiction easier to write?

I actually don’t find a difference in writing something funny or something somber. Both require just the right touch. I spend a lot of time fine tuning, focusing on word choice, on tone, and on rhythm. A funny line can become a lot less so with one or two extra beats in it. Likewise, a somber sentence can be undone with excessive verbiage or poor word choice. It’s the same balancing act, regardless of what the goal is.

Q. Also, what do you find most interesting about the combination of the profane and the sacred (like when the Foxman brothers smoke weed after reading a Kaddish for their father)? Did you work to put moments like this in the book, or do you think they happened naturally because of the characters and the situation(s) they were in?

I think there’s a certain irreverence that permeates this book, which is a direct consequence of the fact that you have a group of irreligious people being coerced into a somber religious ritual. So the very premise was a mixing of the sacred and profane, the Foxmans being a fairly profane bunch to begin with. It was certainly not my intention to mock Judaism or religion in any way, but simply to convey how these siblings, raised in a fairly godless house, would find the concepts so alien.

When I wrote about the family going to temple to say Kaddish, it was actually the point in the story where, despite their ignorance and lack of faith, the ritual actually served a purpose for them. In the moment, despite the strangeness of it, the family is nevertheless moved and comforted by the religious ritual. The fact that, ten minutes later the boys light up some doobage in one of the Hebrew School classrooms does not nullify what happened in the temple, although it does serve as a fantastic counterpoint. I mean, really, who hasn’t gotten high at temple at some point in his life?

Adapting this novel for the screen has been surprisingly painstaking and difficult. I know that’s not the answer most people expect, but it’s the reality. I’ve written original screenplays and adapting my own book was by far the hardest script I’ve ever undertaken. The first mistake was doing it so soon after I finished the book. The characters and events were still so fresh to me, that world was still so visible to me, that making the necessary changes for the screenplay did not come easily. To adapt successfully, you have to be able to discard certain underlying frameworks and givens established by the author. When you are the author, that’s harder than it sounds. And when you’ve written it so recently, and are still so close to it, it’s even harder. I was on book tour while I was writing the script and it reached a point where I could no longer keep straight what happens in the book and what happens in the script. But ultimately, I think I nailed it, and I’m really hoping they make the movie.

Q. What are you working on now? What will we see from you in the near future, either in a bookstore or in the movie theatre?

Right now I’m writing another novel for Dutton. I never say what it’s about because I’ve discovered that my process is generally to only figure that out when I’m halfway through, and then rewrite the whole damn thing. So while I think I know what the new book is about, I’ve done this too many times to really be sure of anything anymore.

I’m also going to be adapting The Pleasure of My Company, a fantastic novel written by Steve Martin, for Twentieth Century Fox, which is something I’m very excited about.

I enjoy being able to write both novels and screenplays; it’s a kind of creative diversification. The processes are very different and you use different mental muscles. But at heart, and in practice, I’ll always be a novelist first. I think like a novelist, and whenever I come up with a story, I conceive it in novelistic terms, not screenwriting terms.


Learn More About This Is Where I Leave You
print

Kitchens of the Great Midwest
J. Ryan Stradal
Back to Top