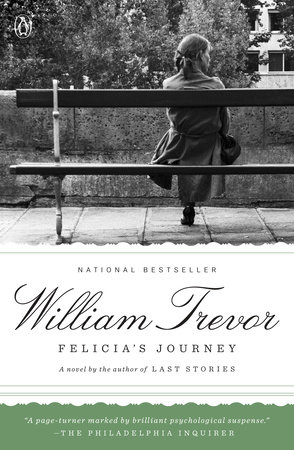 William Trevor has long been hailed as one of the “very best writers of our era” (The Washington Post). In both his short stories and his novels, Trevor manages to shed light on the darkest corners of the human heart. It is no surprise, then, that with Felicia’s Journey Trevor uses his gifts as a master storyteller—spare, lyrical prose; a tightly woven story; and finely drawn characters—to turn out this psychological thriller.

Felicia, the unlikely heroine of the story, is a young Irish girl from a strongly conservative Republican family. Having lost her job at the local meat-canning factory, she is forced to stay at home to care for her widowed father, two brothers, and great-grandmother. Just when she begins to lose all hope of escaping the gloom of her existence, a charming man called Johnny Lysaght returns home from England to visit his mother. It doesn’t take long for Johnny to seduce the naive and impulsive Felicia. Nor does it take long for him to return to England, leaving Felicia pregnant and with no forwarding address. Once her family discovers her secret, and realizes that the baby’s father is a traitor—having joined up with the British Army—Felicia is tossed out of the house and goes to England in search of her lover. It is a quest that will prove futile. Johnny has told her that he works in a lawnmower factory in the Midlands, but it soon becomes clear to everyone but Felicia that he has willfully deceived her.

A combination of innocence and faith keeps Felicia wandering, and ultimately delivers her into the hands of Mr. Hilditch, an outwardly decent man who appears to come to her rescue. But the more benevolent Mr. Hilditch becomes, offering Felicia cups of tea, a meal, and a bed for the night, the more his predatory nature reveals itself. And although the reader slowly realizes that Mr. Hilditch is a monster, planning to add Felicia to his collection of girls in his “Memory Lane,” there is something so lonely and pathetic about him that one can’t help but feel some compassion for him.

Felicia’s journey brings heartache to those around her—her father, heart-sick after denouncing her; Johnny Lysaght, lying on the ground bleeding after being beaten by Felicia’s brothers; and even Mr. Hilditch, slipping increasingly into insanity, finally fully aware of the horrors he has committed. In the end, Felicia returns to the streets where she once searched for Johnny Lysaght, alone and homeless, but liberated—from Johnny, from the memory of her dead mother, from her controlling father, and, most of all, from Mr. Hilditch’s “Memory Lane.”

William Trevor is the author of twenty-eight books, which include novels, short story collections, a play, a volume of memoir, and a children’s tale. Among his many prizes are a 1996 Lannan Literary Award for Fiction. Two of his books were chosen by The New York Times as Best Books of the Year. His short stories appear regularly in The New Yorker.

A CONVERSATION WITH WILLIAM TREVOR

Felicia’s story is sad, but one that is all too common. Many young, pregnant Irish girls travel to England either to terminate a pregnancy or simply to escape the shame that is visited upon them by their families and communities. There was a very famous and controversial case in 1992 of a fourteen-year-old Irish girl who traveled to England to have an abortion. Did this particular story influence the writing of Felicia’s Journey

No. As you say, many young Irish girls make journeys quite similar to Felicia’s—although she, of course, was far from seeking an abortion.

You often refer to Eamon De Valera in Felicia’s Journey and in your other works. What influence did he have on you and do you agree with his vision of Ireland? What role did politics play in your upbringing?

I do agree with De Valera’s vision of Ireland, although often my characters either don’t understand or wholly misunderstand it. Politics played no part in my upbringing.

Your characters are marked by a certain fatalism. Do you think this is a particularly Irish trait?

I don’t think so. I don’t think of my characters as being marked in that particular way; some are, some are not, but it never seems to me to be the most vigorous characteristic.

In Felicia’s Journey, you depict the world of the homeless with haunting realism and empathy. How did you gain such an understanding of this world?

Staring at the Sun

The Bay of Angels
Back to Top