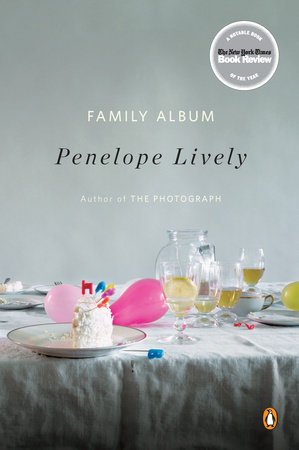 In Penelope Lively’s subtle, observant novel Family Album, the history of the Harper clan unfolds in a series of evocative scenes and conflicting memories—much like the pages of an old photo album. Behind each snapshot of the large, boisterous English family—a devoted mother, an absentminded scholarly father, a Swedish au pair, and six happy children—lies a darker, more complicated truth.

When we first meet the family, the children are grown and scattered around the globe. Gina is a successful television journalist, Roger is a doctor in Canada, Katie is struggling to start her own family, Sandra is the manager of a fashionable boutique in Rome, Clare is a touring ballet dancer, and Paul, the oldest, washes up at home between dead-end jobs and stints in rehab. Their parents, Alison and Charles, along with the aging au pair, Ingrid, still live at Allersmead, the sprawling Victorian where all the children grew up. The Harper children have mixed feelings about the house and the three adults who raised them. They feel smothered by Alison’s vision of the perfect family, and they all know, without ever being told, that Clare’s mother is actually the ever-loyal Ingrid.

The novel is told from the perspective of each character in turn giving us his or her private thoughts and his or her own versions of events. Paul, the eldest and acknowledged favorite of his mother, relates in painful detail his slow stagnation in adulthood, while Gina contemplates her choices to live a life as different from her mother’s as possible. Even the flighty, hysterical matriarch, Alison, who maintains her central place in the family through emotional outbursts and carefully coddled fantasies, reveals herself to readers in an intimate reflection on her life and family.

In this quietly provocative novel, Penelope Lively elegantly shows how a family shapes its own myths and creates its own disasters—and ultimately saves itself.

Penelope Lively was born in Cairo, Egypt, studied at Oxford University, and received the Booker Prize for her novel Moon Tiger. She is the author of twenty-five children’s books and sixteen adult novels, including The Photograph and Consequences. She is a Fellow of the Royal Society of Literature and lives in London.

A CONVERSATION WITH PENELOPE LIVELY

Q. Did you envision this family first as a complete unit or did you begin with one character and work your way out from there?

My original concept was a novel about a large family. I knew there should be six children. So the characters emerged gradually but also more or less simultaneously, until all were clear enough for me to work out the dynamics of their relationships and how the family functioned—or did not function—as a unit.

Q. The family manse, Allersmead, seems to symbolize an old-fashioned (even anachronistic) idea of a certain kind of British family. How important was that setting to you in terms of developing the theme of your novel?

The setting was important from the start—Allersmead, a large late-Victorian house. The house is old, the family could be said to be anachronistic, but I see it rather as individual—as indeed are all families. This one could be said to excel in individuality, perhaps.

Q. Alison, the matriarch, seems for most of the novel to be a fragile woman who exasperates her husband and children with her ideas of how family should be. It’s not until nearly the end of the book that we get some insight into her personality. Why did you decide to hold her perspective back for so long?

As the novel progressed, Alison emerged as the pivot of family life. It seemed right that she should be seen through the eyes of the children before being given the opportunity to speak for herself. For children, parents are simply there—an inescapable fact. When the fact speaks up, that is, and should be, a bit startling.

Q. This is a very female-dominated world: in their own ways, Gina, Alison, Ingrid, and Clare are all active, driving forces while the main male characters, Paul and Charles, are quite passive. Was this a conscious decision on your part? If so, why?

The preponderance of women is accidental, I think. I never meant that to be significant; it just happened that way. I was less conscious of gender than of personality.

Q. The chapters are each told from the perspective of different characters so intimately that it feels as if we’re getting first-person narration, but in fact it is all in the third person. Why did you decide to maintain that degree of distance, instead of having the characters speak to the reader directly?

First-person narration is necessarily solipsistic. Biased, indeed. I wanted a more detached and rounded presentation of each of the characters. I wanted them seen aslant, as it were, as well as directly.

Q. The childhood events and games that the siblings reflect on are ultimately the kinds of mundane things that happen in every family of children, though they are presented in a disturbing and mysterious manner here. Why did you choose to cast a shadow over ordinary life rather than invent a traumatic past for this family?

Most families have their shadows. This family is more dramatically shadowed than most; the family lives with the shadow as best it can.

Q. Clare and Ingrid never discuss their secret bond with each other and neither does the rest of the family. Do you think this approach is distinctively British? Or is it specific to the Allersmead clan?

I don’t see reluctance to discuss crucial things as specifically British. That can happen anywhere, and within any family. Sometimes it can be the most expedient course to take, though that is not necessarily the case with this family.

Q. Corinna, Charles’s cousin and the children’s aunt, gives us an outsider’s perspective on the Harper family. Why did you decide to include her voice in the novel?

Corinna arrived almost uninvited near to the start of the story. I had not planned on a voice from without the family, but when she appeared, full-fledged and opinionated, it seemed best to allow her to stay.

Q. Do you have a favorite or least favorite character in this novel? Was it more or less difficult to write from the perspective of one character?

I have no particular favorite, though I have perhaps a soft spot for Charles, maybe because the others seem to dislike him. He certainly arrived on the page very easily, but I found it a positive advantage to be moving constantly between so many and so varied characters. The contrasts served up an energy, as indeed contrasting personalities give energy to a family.

Fair and Tender Ladies
Lee Smith
Back to Top