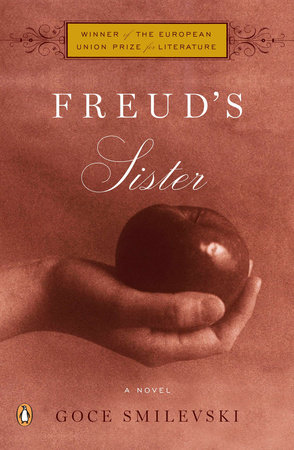 In Freud’s Sister, Goce Smilevski rescues and gives voice to a woman who in her own life was silenced and abandoned, a woman history has forgotten.

In Vienna, 1938, Adolfina Freud was left behind with her other sisters—Paulina, Marie, and Rosa—to face the Nazi terror while her brother Sigmund Freud escaped to the safety of London. Freud could have taken his sisters with him or arranged for their exit visas—they repeatedly implored him to do so—but he refused, claiming that their fears about Hitler and the growing Nazi menace were exaggerated.

In an imaginative tour de force, Goce gives us an Adolfina who is not only forced to die an

agonizing death in the gas chambers—a death that she faces with extraordinary dignity and courage— but to live a life of emotional abuse, loneliness, and betrayal. From an early age, she hears her mother repeat a piercing refrain: “It would have been better if I had not given birth to you” (p. 34). This hostility shapes Adolfina’s inner world and condemns her to a life of loneliness. And though she idolizes her brother Sigmund, their bond is broken when she witnesses him masturbating, a scene that shatters her innocence and that Freud would later use as the basis for his theory of “penis envy.”

She falls in love with a young boy, Rainer, who seems even more forlorn than she is, existing in a state of melancholic blankness, but he, too, betrays her trust and rejects her with deliberate cruelty. She feels again the despair of her childhood, a wound that cannot heal, and remains unmarried. Her friend Klara Klimt, sister of the philandering artist Gustav Klimt, fights for women’s rights and is so often beaten and jailed that she is finally placed in a “madhouse.” Adolfina eventually joins her there, in “the Nest,” where she engages in fascinating debates with Dr. Goethe, the grandson of the famous poet Johann Wolfgang von Goethe, about the relative natures of madness and normality.

Despite her harsh treatment by her family, her lack of formal education, and the severe limits placed on her because of her gender, Adolfina possesses a fine, discriminating mind and a generous, open heart. She more than holds her own in arguments with her brother about the purpose of religion, the meaning of life, the nature of the soul, and the proper understanding of mortality and immortality. Indeed, she asserts that Sigmund is willing to arrogantly condemn all others to a meaningless existence followed only by nothingness, while reserving for himself the privilege of living forever through his works.

Adolfina emerges in these pages as a brilliant, sensitive, independent woman whose spirit and compassion are not crushed by the suffering she endures but rather strengthened by it. At the very end of her life, in a triumph of spiritual resiliency, she is able to care for others in the concentration camps, to give the love she herself was denied.

Lyrical, beautifully written, and richly imagined, Freud’s Sister offers deep and deeply surprising insight into Adolfina Freud’s life, the life and thought of her brother, the tumultuous milieu in which they lived, and the tangled family dynamic that shaped them both.

Goce Smilevski was born in Skopje, Macedonia. He was educated at Charles University in Prague, Central European University in Budapest, and Ss. Cyril and Methodius University in Skopje, where he works at the Institute for Literature. He has won numerous prizes for his writing in Macedonia and abroad.

A CONVERSATION WITH GOCE SMILEVSKI

Q. How much of the novel is based on the facts of Adolfina Freud’s life?

Several facts remained after Adolfina Freud’s death: she was unmarried (a horror for a woman in the early twentieth century), she cared for her parents until their deaths, and she was mistreated by her mother. What else remained of her? A few photographs. A few letters to her brother. Sigmund Freud’s letter to his fiancée (eventually his wife), Martha, saying that he loves Adolfina most of all his sisters and that she is the most sensitive of them. A few lines that Martin Freud wrote in his book suggesting that the Freud family underestimated his aunt. That is all we know about her.

So it was not a sketch that turned into a painting; it was more like a canvas with a few drops of dark color on it—a few dark drops that only suggested the contours of Adolfina’s life. And I even changed the places of one or two of these drops. For example, the fact is that Adolfina did not die in the same camp with her sisters. I thought that perhaps this death could become a metaphor for her lonely life, but, although I tried, I simply could not narrate an ending any different from having these four women together—four women who faced the beginning of life together and who then, many decades later, face the end of life together as well.

Q. In your author’s note, you write that “the well–known facts of Sigmund Freud’s life were like scenery, or like the walls of a labyrinth in which I wandered for years, trying to find the corridors where I could hear Adolfina’s voice so I could write it down, and in this way rescue in fiction one of the many lives forgotten by history.” What finally allowed you to hear Adolfina’s voice? Why was it so important for you to rescue her?

Historiography is obsessed with the rulers, men of power, and influential people, while the memories of the ordinary people die with those who have known them. Adolfina Freud spent all of her life close to her brother—about whom we know so many things important and trivial, including where he bought his cigars and how many he smoked per day—but we know almost nothing of what could be called Adolfina’s personal life, nothing of her joys and sorrows. Seen in this perspective, Adolfina is a metaphor for all the people who are forgotten, those whose lives were, if there is nothing but a material realm, less than traces on the sand of time. Her voice narrating the novel is an echo of the voices of the people who had lives similar to hers and who disappeared from the earth without leaving behind anything that would witness their existence.

I think that writing the novel has changed my view on life more than my view on Freud. Among other things, it changed my understanding of guilt. I do not mean that I react to guilt (mine and others’) differently, but I do understand it in quite a different way than before. Besides being the person who forever changed our views of ourselves—he was the first to so clearly and firmly state that we are not what we think we are, that there is so much unconscious beneath what we think of as our conscious decisions and ideas— Freud was an ordinary human being, like all of us. He had a human right to make a mistake, even one that lead to his sisters’ tragic deaths in the Holocaust after he left Nazi–occupied Vienna.

Q. Why do you think Freud refused to help his sisters flee Vienna?

I don’t perceive it as an act of refusing to help his sisters to flee Vienna. I perceive it as a fact of not taking the sisters with him to a free territory. And I have no answer about this fact. That is why it is written in the novel in a half–uttered way. There is no explanation beyond the dialogue between Freud and two of his sisters when they beg him to help them to flee Vienna. And I believe that, if there is an eternity and if we could have access to it, Freud himself would not be able to answer our question of why he did what he did, or why he didn’t do what he should have, as a brother and as a human being.

Q. Adolfina and Dr. Goethe have a long argument about the meaning of “normality” and “madness.” Did you draw on historical accounts of how madness was viewed during the period to write this scene? What is your sense of how mental illness is regarded and treated today? How much progress have we made?

Researching how madness was treated and regarded since the ancient times, I realized that we have the same fear of and disgust for madness as people from centuries ago, only now we are generally less cruel to the mad than we were before. I also realized that this reaction is only a reflection of our fear of our unconscious, of what lies there, of what can be awakened without our will.

Q. Could you talk about your creative process, writing habits, and major influences?

Life itself is a creative process, and some of us try to give a form to its essence, or to its fragments, in words, sounds, images. Ideas and images come and go, and some of them remain with me for some time—a few minutes or several years—before I try to find words for them. When I “have” a sentence or a paragraph, I don’t wait, but try to put it down immediately. After the mental and written notes form some kind of entity, I feel the need to give them structure. About the major influences, they are too many, as the school curriculum for literature in Macedonia was great when I was a pupil. Before we were nineteen years old, we became familiar with the most significant authors and works of literature, from the ancient Gilgameshand the Bible and Sophocles and Sappho to the twentieth century’s Bulgakov and Kafka and García Márquez and Kundera.

But the major influence of narrating and writing for me happened before I learned to read. I grew up in an orphanage, in a big building in which about two hundred kids lived. There my mother worked and cared for twenty children, being something of a parent to each of them. When a new child arrived in the orphanage, she would write down the most important events of the child’s past. So they would talk for hours, and in a big black notebook my mother would write the child’s words about joyful and forever gone moments, and also about tragic events. As I listened, I could not understand most of the things I heard, so I made up my childish associations, I used imagination, I transformed them. And what little I understood of what I heard then, I remember even now. Since then, I became aware that my story is not the only one and that I should try to understand the lives of other people, knowing that I will not be able to understand even my own life. But that fact is not discouraging, as the need to understand oneself and the other being is worth a life, and it is the source of literary creation..

The Book of Blam
Aleksandar Tisma

King of the Jews
Leslie Epstein

Farewell to the Sea
Reinaldo Arenas

Clara
Kurt Palka
Back to Top