The Road from Coorain Reader’s Guide 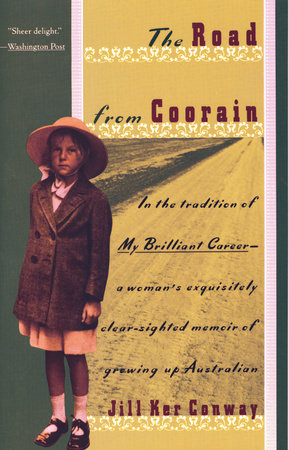 The Road from Coorain Reader’s Guide

The questions, discussion topics, and author biography that follow are intended to enhance your group’s reading of Jill Ker Conway’s The Road from Coorain. We hope they will aid your understanding of the many rich themes that make up Conway’s story of her youth in mid-century Australia.

Conway recounts the successive phases of her early life: her childhood on a remote sheep station, her teenage years in suburban Sydney, her education at the University of Sydney, and her decision to become a historian and to leave Australia for the United States. Her own coming of age is set against that of her country: the British Empire is disintegrating, and as England retreats to a local rather than an international role in world affairs, Australia must set out to rediscover its own identity, not as an extension of England, but as a Pacific nation with a distinctive culture and history. Conway’s search for her own identity, as a woman and as an Australian, is a complex story written in a deceptively simple narrative style.

1. In the first chapter, Conway writes of the “bush ethos which grew up from making a virtue out of loneliness and hardship” (p. 8). Stoicism and self- sufficiency are the ideals adopted by the outback settlers. How have those ideals shaped the Kers’ lives? In what way have they been destructive to the family? Though Conway finally rejected these values, is it possible that they helped her to break away from her potentially
unproductive life and start again?

2. Conway stresses the fact that Australians of her parents’ generation defined themselves as Britons and saw their own country only in British terms. They equated their national interests with England’s; even their map of the world was seen from a British perspective, with nearby Japan located in the “Far East.” How did this attitude shape the educational system into which Jill and her brothers were placed? How did it color their attitudes toward their native country? How did it shape the young Australians’ class consciousness, in a country whose social and racial make-up was so different from contemporary England’s?

3. How does Conway present her mother as a prototypical twentieth-century woman? In what way are the attitudes of Australian society to blame for the mother’s deterioration from being an independent professional, a “great healer” (p. 195), to a neurotic hypochondriac? How has her simple system of values proved inadequate to the complex world of the twentieth century? To what degree do you feel that she has caused her own problems?

4. Conway compares the barriers against women that she herself encountered as she grew up with those that shaped her mother’s life. Some were openly acknowledged (i.e., the inequitable wages for men and women offered in the Help Wanted ads). Some were more insidious: unspoken prejudices buried deep within the culture. How do the two women differ in the way they confront these barriers? How do their different educational backgrounds affect their points of view?

5. Conway speculates that had her parents encountered failure earlier in their lives, they might “have learned to bend a little before the harshness of fate” (p. 23). How does the disastrous drought at Coorain affect the character of Conway’s father? Conway suggests that his death was a suicide. Does she acknowledge and confront his implied abandonment of her and the rest of the family?

6. “It was a comprehensible world” (p. 50), Conway writes of her early childhood on Coorain. “One saw visible results from one’s labors” (p. 50). In what way does the young girl’s comprehensible world turn into an incomprehensible one? What efforts does she make to confer meaning upon it? How do religious, spiritual, and intellectual systems of thought help or hinder her?

7. Conway writes that in Australia, “people distrusted intellectuals. Australians mocked anyone with ‘big ideas’ and found them specially laughable in women” (p. 146). But the same Australians who mocked “ideas” also had a high regard for success, inclusive of academic success. What shape do these contradictory attitudes give Australian society? How does the isolated position of Australian intellectuals, as depicted by Conway, reflect this dichotomy? The United States, like Australia, is a culture with a significant history of anti-intellectualism. How is this reflected in our own society?

8. How did Conway’s experiences with professional discrimination against women bring her to a more personal realization of the fate of Australia’s aboriginal people? What do her parents’ use of the nardoo stones found on Coorain signify to her?

9. Mid-century Australia had an overwhelmingly white population, but this was not true of England’s colonies and dominions in Asia and Africa. How does Conway’s visit to newly independent Ceylon change her view of the British Empire and of the imperialist credo of white superiority? The credo is not merely racial, but cultural as well. What perspective is Conway given on her own society’s culture and history by her first encounter with the wider world?

10. While the Australians willingly went to war for England, England’s treatment of Australia as expendable during the Second World War dramatized the actual state of affairs. Conway knew that “it was time to give up pretenses of the old British Empire, recognize that we were a Southern Pacific nation, and begin to study and understand the peoples and countries of our part of the globe” (p. 182). How does Conway relate her own choice of vocation as a historian to her country’s quest for identity? By extension, in what symbolic ways does she identify her own life with that of Australia?

11. Conway’s story, like James Joyce’s A Portrait of the Artist as a Young Man, ends with her acceptance of a life of exile. But unlike Joyce, she sees her exile as resulting from a series of “thorough and all-encompassing defeats” (p. 236). Is the narrative of Conway’s early life really a story of defeat? Or is it perhaps a story of success? Conway felt that she had failed in several areas–in making her mother happy, in running Coorain–but were these quixotic battles, impossible to win? Do you feel, as she did, that she turned her back on her duty?

12. Jill Ker Conway has written: “The rise of democracy has enlarged the focus of interest in the lives of other people–from monarch, great general, and political leader to the ordinary person–someone like ourselves” (Written by Herself, p. vii). How does Conway shape her own story–that of an obscure, isolated young girl–into a narrative with wide social and historical implications?

13. How does Conway shape the plot of The Road from Coorain? Is it a romance, a story of material success, an odyssey, a spiritual or intellectual quest or the story of a conflict between mother and daughter?

14. Conway has written elsewhere about her environmental concerns. What is the role of nature in this narrative, and how does her own understanding of the natural world influence her intellectual development?

15. The Road from Coorain is a narrative about separation and the formation of a strongly bonded female personality. It is thus a story which runs counter to a current sentimental view of women’s lives as networks of relationships. Is Conway’s view persuasive?

Jill Ker Conway was born in Hillston, New South Wales, Australia, in 1934. Her father was a sheep rancher, her mother a nurse, and Conway and her brothers were brought up in almost total isolation on Coorain, their 18,000-acre tract of land, which was eventually enlarged to 32,000 acres. With the unexpected death of her husband, on top of a devastating drought, Mrs. Ker was compelled to leave Coorain with her family for Sydney, where they led a relatively conventional middle-class life. Jill
was educated at the all-female Abbotsleigh School and the University of Sydney, where she took an honors degree in history.

Conway emigrated to the United States in 1960, and completed her Ph.D. at Harvard University in 1969. As a historian she specialized in American social and intellectual history, and in her own private intellectual concern, the history of American women. She taught at the University of Toronto from 1964 to 1975, where she eventually became vice-president; she then spent ten years as the president of Smith College, the first woman to hold that position.

Since 1985 she has been a visiting professor at M.I.T. in its Science, Technology and Society program.
Learn More About The Road from Coorain
print

All the Way to the Tigers

Too Close to the Falls

To Shake the Sleeping Self

The Lost Daughter
Back to Top