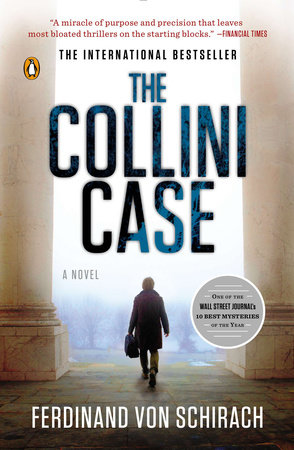 An Introduction to The Collini Case

Upon examining the body of eighty-five-year-old industrial magnate Jean-Baptiste Meyer, the Berlin coroner seems unlikely to return a verdict of suicide. Meyer—the force behind the manufacturing giant Meyer Engineering Works, a man on familiar terms with a series of prime ministers, and a pillar of postwar German society—has been shot four times in the back of the head at point-blank range. The assailant then repeatedly drove his foot into the dead man’s face with such violence that the heel of his boot came off. In one sense, the case presents few problems for the prosecution: The killer, Fabrizio Collini, reported the slaying himself and freely admits to having pulled the trigger. The whodunit is simple. But a related question—the why-dunit—is perplexing in the extreme: Collini has no clear motive for his crime, and he stoutly refuses to discuss the matter with the police.

Into this mystery walks Caspar Leinen, a young defense attorney whose first big case will be defending Collini, the golden opportunity he has anticipated for years. But the complications quickly mount. Collini says he doesn’t want a lawyer and will not confide even in Leinen. Worse still, Leinen receives a distressed phone call from his longtime friend Johanna Meyer, who tearfully informs him that he is defending the killer of her grandfather, known to Leinen as Hans Meyer, the same Hans Meyer who had been a father figure in Leinen’s own childhood. Leinen is plunged into a maze of ethical reflections: How can one stand by an obviously guilty man? How can one defend the killer of someone whom one has known and loved? Against his friend’s wishes and the dictates of his own feelings, Leinen takes the case. However, his efforts on Collini’s behalf lead him deeper into a moral and emotional labyrinth. He discovers that Hans Meyer, whom he had known to be “a thoroughly decent man,” was not all that he seemed. The dark, winding trail on which Leinen finds himself will lead him all the way back to Germany’s National Socialist past and a tale of rape and mass murder almost impossible to contemplate.

Unflinching in its gaze into the abyss, stark and harrowing in its depictions of physical violence and spiritual isolation, The Collini Case is a haunting, unforgettable story of one man’s search for justice and a nation’s stumbling efforts to find a way forward out of unspeakable darkness.

1. Ferdinand von Schirach has been praised by critics for his sense of literary style. Choose a passage from The Collini Case that you found especially interesting and discuss the aspects of the writing that stand out for you. You might especially consider Schirach’s choices of detail and his ability to waste few words in producing a desired effect.

2. In The Collini Case, Caspar Leinen argues that Fabrizio Collini’s killing of Hans Meyer was justifiable because Collini did not have an adequate remedy under German law. What, then, if Johanna Meyer were to kill Collini and make a similar argument, i.e., that Collini deserved to die for brutally slaying her grandfather, but that German law has no death penalty? Would Leinen’s logic justify her killing of Collini? Can vigilante justice ever be an acceptable solution?

3. Discuss the character of Collini. Are you satisfied with how well Schirach lets us get to know him? What might Schirach’s motives have been for making Collini so quiet and for not delving deeper into his personality?

4. Johanna goes to bed with Leinen despite the fact that he is defending the killer of her beloved grandfather. What are Johanna’s overall motivations as a character, and do they make sense to you?

5. Concerning Leinen’s thoughts about Johanna, Schirach writes, “He realized that they were not ‘in love,’ that was a meaningless concept — this was simply the way they were” (p. 86). How can being in love be a meaningless concept? Discuss Leinen’s attitude toward emotion and how it fits the mood of the novel.

6. Leinen’s incapacity to attach meaning to love is one way in which his character resists the expectations that are typically placed on a fictional hero. In what other ways does he resist the usual label of “hero”? Is he nevertheless heroic?

7. Shirach’s text frequently revisits the theme of dismemberment and brutal injury, sometimes lingering over the gruesome details: Philipp’s decapitation; Mattinger’s missing arm; the path of a bullet through a young girl’s throat. Yet these facts are often conveyed with very little emotion. What do Schirach’s depictions of violence and physical loss contribute to his story?

8. To what extent, if at all, should former members of the military be held criminally responsible for their actions during war, the very essence of which is violence and death? Is it fair to condemn someone for doing what was either legally acceptable or practically necessary at the time?

9. What obligations does a person have to resist when his/her country is pursuing immoral policies? Try considering this question both in light of The Collini Case and other situations, e.g., paying taxes to support an unjust war, an out-of-control arms race, or covert aid to a brutal dictatorship. Where should a citizen draw the line between doing what’s right and just going along?

10. In The Collini Case, because Hans Meyer was not prosecuted for his activities as an SS officer, he was able to become a highly respected citizen and a major industrialist, responsible for creating countless jobs and adding untold millions to the German economy. If we take Leinen’s word, Meyer became “a thoroughly decent man” after the war (p. 61). Would “justice” have been served by putting such a man in prison, given all the good that would have been lost in doing so?

11. What does Hans Meyer’s reminiscence about the death of his mother’s horse (p. 27–28) tell us about his character? What role does this vignette play in the larger context of the novel?

12. What do you think of a legal system that provides for the defense of someone like Collini, who obviously committed the crime and, indeed, desires no defense? Why should rights and procedures be important in such a situation?

Learn More About The Collini Case
print
Back to Top