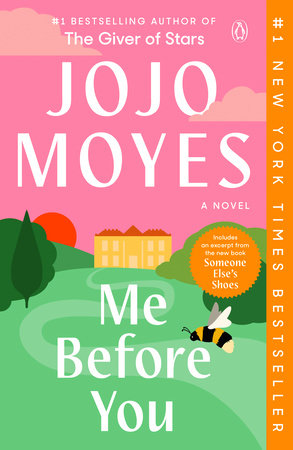 print
Me Before You (Movie Tie-In) Reader’s Guide

INTRODUCTION
“The thing about being catapulted into a whole new life—or at least, shoved up so hard against someone else’s life that you might as well have your face pressed against their window—is that it forces you to rethink your idea of who you are” (p. 58).

Louisa Clark never wanted to leave her job at the Buttered Bun. After six years, she felt secure in the routine of making tea and chatting with the café’s regulars. But when her boss closes the business, the unskilled twenty–six–year–old must take a new job as a paid companion to a wealthy ex-Master of the Universe, who is wheelchair bound after an accident. Prickly and embittered, Will Traynor nonetheless opens Louisa’s eyes to the limitations she has imposed upon her life—and the infinite possibilities that only love can awaken.

A few short years earlier, Will was a major corporate player who bought and sold companies for obscene profits. He climbed mountains and dated cover girls. All that changed after a speeding motorcycle crushed his spine. Paralyzed from the neck down and even unable to feed himself, Will’s life as he knows it is over—and he is not interested in exploring a new one.

Louisa feels intimidated by Will, his commanding mother, Camilla, and the Traynors’ grand home, but the position pays a lot more than her waitressing job did and her family doesn’t hesitate to remind Lou that she has few options otherwise.

At first, Will resents Louisa’s very presence. When he destroys a shelf full of pictures, Louisa tries to repair the damage. Furious, he lashes out, “It would be nice—just for once—if someone paid attention to what I wanted. Me smashing those photographs was not an accident” (p. 56). Yet, the blowout is a turning point. Louisa stops trying to second guess Will’s decisions, but also refuses to bear the brunt of his frustration.

Louisa is accustomed to putting herself last. Her parents never hid the fact that they considered Louisa’s younger sister, Treena, to be the more intelligent sibling. Patrick—Louisa’s boyfriend of six years—is a self–absorbed personal trainer concerned only with his performance in the next triathlon. As she and Will grow closer, he convinces her that she deserves more respect from everyone in her life, including herself. Still, Lou has her reasons for wanting things to stay the same as they have always been.

When Lou learns that Will has shocking plans of his own, she sets out to show him that life is still worth living. She begins researching technologies that can give him more autonomy and looking for outings that he might find appealing. Each for the other’s sake, Louisa and Will push beyond their comfort zones and, in turn, change each other in ways that neither could ever have anticipated.

As inspiring as it is heartbreaking, Me Before You is Jojo Moyes’s international bestselling breakout novel—and the captivating tale of two people whose improbable romance sets them both free.

Jojo Moyes was raised in London. She writes for the Daily Telegraph, Daily Mail, Red and Woman & Home. She’s married to Charles Arthur, technology editor of The Guardian. They live with their three children on a farm in Essex, England.

A CONVERSATION WITH JOJO MOYES

Q. What was the inspiration behind Me Before You?

It was a number of things. I had two close relatives who were dependent on twenty–four–hour care, and the issue of quality of life and how we behave around the severely disabled was high in my mind. But the novel was really spurred by a news story I heard, about a young rugby player who was left quadriplegic after an accident and who persuaded his parents to take him to Dignitas, the Swiss clinic, to allow him to go through with an assisted suicide. I couldn’t believe any parent would agree to do that—and yet the more I read up on his story, the more I realized the issue was not as clear–cut as I would have liked to believe.

Q. With Louisa and Treena, you perfectly captured the love–hate relationship that sisters often share. Do you have sisters yourself?

I have half sisters, who are much younger than I am. I’ve always been fascinated by their relationship and the relationships some of my friends have with their sisters. What I’m most captivated by is that ability to be at each other’s throats one moment and yet totally bonded and presenting a united front in the next. If you are an only child, as I was for nineteen years, that kind of relationship is pretty mesmerizing.

Q. The novel reflects an in–depth knowledge of the issues related to quadriplegia. What kind of research did you do? Were some of the characters in the quadriplegic chat rooms based on real people?

The chat room characters are an amalgam of attitudes that I heard online. And I had a lot of personal experience from within my own family and friends as to how people treat the disabled, and of some of the issues they face.

As far as other research goes, there are quads who upload footage of their daily routines to the Internet, and this was a great help in making sure I could accurately represent some of the procedures. I’ve had a lot of carers and families of quadriplegics contact me since the book was published [in the UK], and I have been relieved that they thought I had represented their lives accurately.

Q. Louisa narrates the first third of the novel, but the remainder is divided between various other characters, including Treena and Mr. Traynor. Why did you choose to organize it this way?

In the early part of the novel I wanted the reader to go through a journey of almost blind discovery with Lou, and to feel as out of their depth as she does. Later, I thought it was important for the other characters’ dilemmas to become a bit more three–dimensional. The only person whose mind I couldn’t enter was Will’s, because I wanted his intentions to be one of the central tensions of the book.

Q. Whose voice did you find easiest to write? Whose was the most difficult?

Unusually (for me), I found them all easy, possibly because they were so different, and because they were each so clear in my head. The hardest was actually Treena, because she was the closest to Lou, and I needed them to be distinct from each other.

Q. Treena can’t relate to the way Louisa feels about Will because she’s never really been in love before. She can only do so by imagining the way she would feel if her son, Thomas, were in Will’s situation. Maeve Binchy’s death revived the ongoing debate about whether a woman writer needs to have children in order to really understand the human condition. Where do you weigh in?

Oh gosh. That’s a toughie. I have writer friends who would kill me if I dared to suggest they couldn’t imagine their way into some aspect of the human condition because they’d never given birth. But all major life experiences will change you as a writer—they have to. I acknowledge that when I had children I personally felt like I’d lost a layer of skin, and I do wonder whether that visceral level of love and fear does somehow feed its way through into your writing. I know it does into other aspects of my life.

Q. You’re a two–time winner of the Romance Novelists Association Book of the Year Award. What do you think distinguishes a really great romance novel from a merely good one?

For me, it’s steering away from the obvious; also, perhaps to take the reader into settings where she might not normally go, whether that be into the past, or some extreme situation.

Q. Do you like reading romances as well as writing them? Who are some of your favorite writers?

I don’t tend to read romances per se, but I read across all sorts of genres and most of what I read has a love story at the heart of it (don’t most books?). Some of my favorite writers include Kate Atkinson, Nora Ephron, and Barbara Kingsolver. More recently I loved The Hunger Games trilogy and Gillian Flynn’s Gone Girl.

Q. You’ve been writing fiction for more than a decade, but your previous book, The Last Letter from Your Lover, won you the attention of a much wider audience. Has your suddenly higher profile changed the way you write?

It’s made it harder! I find I’m questioning what I’m doing from a much earlier stage: Is this plotline going to tie me in knots later? Is this character relatable? Is this story too slow getting going? I feel like ten books in, I’m only just learning my craft.

My new book, The Girl You Left Behind, is set in modern–day London and in Occupied France in 1916 and will be published next year in the States. I’m also 40,000 words into a new book, but I’m at the stage where I’m doing as much thinking as writing.


1.  If you were Louisa, would you have quit working for the Traynors? If yes, at what point?

2.  Were you able to relate to the way Will felt after his accident? What about his outlook on life did you find most difficult to understand or accept?

4.  Louisa often finds Mrs. Traynor cold and judgmental. Is there an appropriate way to behave in Mrs. Traynor’s situation?

5.  What is your opinion of Mr. Traynor? Did it change after you read his side of the story?

6.  Why is Louisa able to reach Will when so many others could not?

7.  Were you as surprised as Lou to learn of Will’s plans?

9.  Would Patrick have asked Louisa to move in with him if he hadn’t felt threatened by Will? If Louisa had never accepted her job with the Traynors, where would her relationship with Patrick have gone?

10.  Discuss Louisa’s own secret ties to the castle. Would most girls in her situation have blamed themselves? Should Treena have behaved differently in the aftermath?

11.  What did you make of the way Lou’s mother, Josie, judges Lou’s decisions regarding Will. Is Josie’s reaction fair?

12.  Before his accident, Will was a philanderer and a corporate raider who would probably never have given Louisa a second look. Why is it that people are so often unable to see what’s truly important until they’ve experienced loss?

Learn More About Me Before You (Movie Tie-In)
print

In Too Deep
Cherry Adair

Out of Sight
Cherry Adair