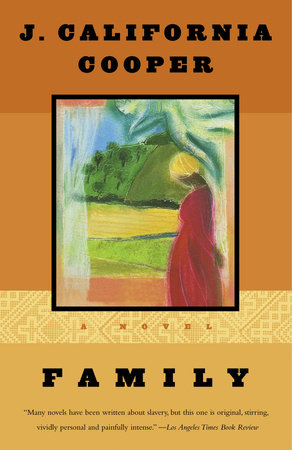 In her acclaimed novels and short stories, J. California Cooper portrays the lives of African Americans, bringing to light the impact of history, social and economic hardship, and enduring cultural strengths on the experiences of individuals and families. The questions, discussion topics, suggested reading list, and author biography that follow are designed to enhance your group’s discussion of her works, which range across time and place but share the passion, humor, and wisdom that mark J. California Cooper as one of the most original and engaging storytellers of our time.

Family is a stunning, often painfully graphic re-creation of the realities of slavery: black women raped by white masters; black children sold to sustain failing plantations–or to satisfy the whims of a petulant mistress; strong men humiliated, whipped, and beaten because of the color of their skin. But it is also the triumphant story of a mother whose loving spirit transcends the barriers of death and time, allowing her to watch over her children and her children’s children. In simple, hauntingly poetic language, the slave Clora, who killed herself to escape an unbearable existence, recounts the "grief and misery that is soul and core of the life of a slave" [p. 55] and follows her children as they experience the joys and challenges of emancipation, create new lives for themselves and their families in the postwar South, in northern cities, and abroad, and hold fast to their dreams and their faith as they confront the fear and hatred that permeates their world.

1. Cooper has chosen an unusual narrative voice in Family. How does the use of an unorthodox narrator–"this dead-but-not-gone thing" [p. 37]–contribute to the emotional impact of the story as it unfolds? Does the narrator’s personal perspective strengthen or undermine the credibility of the novel? Is it more effective than a diary, a fictionalized memoir, or other common forms of first-person narratives, and if so, why?

2. Like her mother before her, Clora commits suicide rather than continuing life as a slave. What gives her daughter, Always, the power to go on despite the dreadful things she experiences? What particular motivations does Always have that set her apart, and what steps does she take to ensure a better future for herself? Because of their light complexions, Always’s siblings Peach and Sun are able to enjoy successful lives in the white world. Are the decisions they make–including Sun’s failure to secure Always’s freedom because she is "not white . . . enough" [p. 125]–justifiable within the context of the time? Clora says, "My blood ran like it was let loose from a stream into the river, into the ocean . . . Ran into the world, hidden, but THERE" [p. 63]. Are the implications of this statement totally positive? What are the costs of keeping one’s heritage secret, as Peach does?

3. In addition to graphic scenes of violence, how does Cooper convey the profound evils of the institution of slavery? What incidents bring to life the toll of slavery on the black characters’ intellectual and emotional lives? Clora declares, "Them white people made hate. . . . That’s what they made and that’s what they got" [p. 55]. Are any of the white characters in the book exempt from this condemnation? To what extent are the whites victims of the system they created? What do the stories of Sun and Loretta, and of Soon and Doak Jr., reveal about the factors that sustained slavery? What assumptions about the relationship between the races still influence the opinions and beliefs of both African Americans and whites in American society today?

4. What do Cooper’s novels share with other books, both fiction and nonfiction, that you have read about the Civil War period? Do her descriptions of the relationships between African Americans and whites before and immediately following the war differ from your previous impressions or beliefs? In what ways does Cooper challenge the traditional depiction of the boundaries between slave and master, black and white? Which characters or relationships do you find particularly surprising? Are the white characters as fully developed as the African Americans are?

5. Cooper touches on a wide range of social, economic, and political issues in her writing, including the historical divisions between races and classes; interracial relationships; the significance of complexion in society in general and within the African American community specifically; and the importance of education. What techniques does she use to incorporate these subjects without disrupting the flow of the stories? In what ways can fiction be more effective than nonfiction in revealing the forces that shape our world?
3.In describing Cooper’s writing, Alice Walker said,

6. In describing Cooper’s writing, Alice Walker said, "Her style is deceptively simple and direct and the vale of tears in which her characters reside is never so deep that a rich chuckle at a foolish person’s foolishness cannot be heard." How do these traits mirror classic forms of storytelling, from myths and Biblical parables to the folk stories passed down through oral traditions? Why do you think Cooper may have chosen to use these timeless techniques to tell her stories?

J. California Cooper is the author of five collections of short stories, three novels, and seventeen plays. She was named Black Playwright of the Year in 1978 for Strangers, won an American Book Award for Home-made Love, a collection of stories, and received the James Baldwin Writing Award and the Literary Lion Award from the American Library Association. She lives in northern California.
Learn More About Family
print
Back to Top