The Wake of the Wind Reader’s Guide 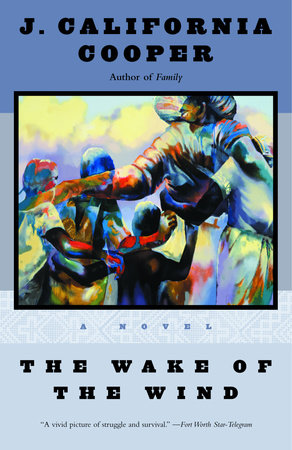 The Wake of the Wind Reader’s Guide

print
The Wake of the Wind Reader’s Guide

In her acclaimed novels and short stories, J. California Cooper portrays the lives of African Americans, bringing to light the impact of history, social and economic hardship, and enduring cultural strengths on the experiences of individuals and families. The questions, discussion topics, suggested reading list, and author biography that follow are designed to enhance your group’s discussion of her works, which range across time and place but share the passion, humor, and wisdom that mark J. California Cooper as one of the most original and engaging storytellers of our time.

In a South devastated by the Civil War, African Americans and whites alike faced the awesome task of adjusting to a new social and economic order. The Wake of the Wind focuses on Lifee, a beautiful, educated former house slave, and her husband, Mordecai, who set out with their extended family to make a home for themselves far from the Texas plantation that holds memories only of horror and suffering. With determination, ingenuity, and intelligence, they manage not only to survive but to embrace the true meaning of emancipation: the right to work for themselves, love and protect their families, and take responsibility for their own futures. Their accomplishments–from the productive farm Mor lovingly tends to Lifee’s efforts to educate her own children and other African Americans by teaching them to read–are constantly threatened by the violence committed by enraged whites across the countryside. An extraordinary perspective on one of the darkest corners of American history, The Wake of the Wind illuminates the hope and resilience that sustained a people through unspeakable tragedies and set a strong foundation for succeeding generations.

1. Why does Cooper begin The Wake of the Wind with the prologue about Africa and the descriptions of Suwaibu and Kola’s capture by slave traders and their years in slavery? Do they do more than serve as historical background for the story of Lifee and Mor? Are there parallels between the journeys Suwaibu and Kola make and Lifee and Mor’s journey across the American South after the Civil War?

2. After Lifee gains her freedom, she tells her former mistress, "Miz Morella, white folks ain’t been taking care of us. We have been taking care of white folks. Better ask what you all will do when we are gone and slavery is no more" [p. 51]. How does the novel bring to light the far-reaching repercussions of the dismantling of the slave system? How does the white population limit the freedom of African Americans even after the law has emancipated them? Which segment of white society is most responsible for the rise of racial violence after the war and why? Do Cooper’s explanations of the sources of racism remain valid today?

3. What values guide Mor and Lifee as they build a life for themselves and their children? How do they impart these values not only through words but also through their actions? Do you think the portrait Cooper paints is idealized? Are her descriptions of white America (for example, Mor’s conversation with his children [pp. 226-228] and Able’s discussion of his experiences at college [p. 334]) accurate?

4. What do Cooper’s novels share with other books, both fiction and nonfiction, that you have read about the Civil War period? Do her descriptions of the relationships between African Americans and whites before and immediately following the war differ from your previous impressions or beliefs? In what ways does Cooper challenge the traditional depiction of the boundaries between slave and master, black and white? Which characters or relationships do you find particularly surprising? Are the white characters as fully developed as the African Americans are?

5. Cooper touches on a wide range of social, economic, and political issues in her writing, including the historical divisions between races and classes; interracial relationships; the significance of complexion in society in general and within the African American community specifically; and the importance of education. What techniques does she use to incorporate these subjects without disrupting the flow of the stories? In what ways can fiction be more effective than nonfiction in revealing the forces that shape our world?

6. In describing Cooper’s writing, Alice Walker said, "Her style is deceptively simple and direct and the vale of tears in which her characters reside is never so deep that a rich chuckle at a foolish person’s foolishness cannot be heard." How do these traits mirror classic forms of storytelling, from myths and Biblical parables to the folk stories passed down through oral traditions? Why do you think Cooper may have chosen to use these timeless techniques to tell her stories?

J. California Cooper is the author of five collections of short stories, three novels, and seventeen plays. She was named Black Playwright of the Year in 1978 for Strangers, won an American Book Award for Home-made Love, a collection of stories, and received the James Baldwin Writing Award and the Literary Lion Award from the American Library Association. She lives in northern California.
Learn More About The Wake of the Wind
print

A COUNTRY OF STRANGERS

The Town
Back to Top