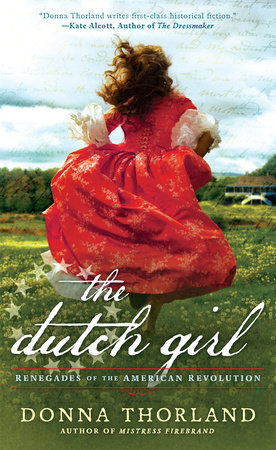 1. The novel has many elements that place it in the Gothic tradition: a remote house; a powerful, landed aristocrat; a heroine separated from her home and family. How does it conform to and defy the conventions established by books like Jane Eyre and Rebecca?

2. What do Anna’s klompen symbolize to Gerrit? Do they mean something different to Anna herself? What do they mean to you?

3. How did you feel about the choices Annatje made to survive after she left Harenwyck?

4. Kate Grey blackmails Anna into traveling to Harenwyck, but Anna acknowledges, if only to herself, a debt owed to the Widow. Do you think Anna made the journey to save herself from exposure as an imposter, or for more complicated reasons?

5. The Widow told Anna that she would make a good teacher, but that it was not a role she could play forever, because of her strong sense of social justice. Was the Widow right?

6. Andries Van Haren has a vision for reforming the patroonship that will provide his tenants with schools, doctors, better roads, and more favorable markets for their goods. Would you choose the security of tenancy under a regime like Andries’, or the independence—and uncertainties—of life as a freeholder?

7. Gerrit resorts to highway robbery to destabilize his brother’s regime. Is he more or less justified than the partisan bandits terrorizing the Hudson River Valley on behalf of the British and Rebel armies?

8. Did Anna really see the ghost of Barbara Fenton in the woods, or was it a hallucination?

9. Barbara Fenton’s tragic romance with her Dutchman serves as a counterpoint to Anna’s happy union with Gerrit. Anna and Gerrit both find meaning in the story. What is it that Anna learns from Barbara’s tale? What is Gerrit’s lesson?
Learn More About The Dutch Girl
print
Back to Top