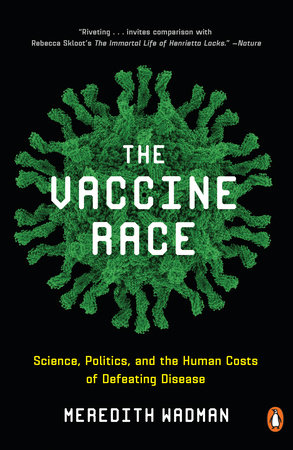 1. Polio was the most feared infectious disease during Leonard Hayflick’s childhood in 1930s Philadelphia. It was 1955 when a polio vaccine finally became available. Do you have parents or grandparents who remember what it was like before polio vaccine became available? What have they shared with you about that time? What other infectious diseases do they remember from the prevaccine era?

2. What were some of the early problems with the polio vaccine, and how did they create an opportunity for Hayflick? Who was Bernice Eddy and what role did she play in assuring the polio vaccine’s safety? How was her discovery received?

3. In the late 1950s and early 1960s, Wistar Institute scientists tested experimental polio vaccine on newborns and preemies at Philadelphia General Hospital. Why do you think that hospital was chosen? Were the researchers justified in conducting experiments at the hospital?

4. In 1961, Hayflick published the scientific discovery that would bring him lasting fame. What was the discovery and how did it challenge conventional scientific wisdom? How did this discovery lead to a vital vaccine-making tool?

5. Who was Mrs. X? What was her situation in early 1962? How did her life and that of Hayflick come to intersect?

6. Are medical ethics inviolable, unchanging principles or do they change with cultures and with time? Was a wrong done to Mrs. X? If you think so, can it be righted?

7. Who was Roderick Murray and what influences shaped him? Did he trust Hayflick’s human fetal cells as vaccine-making “factories”? Why did it matter what he thought?

8. A major U.S. epidemic in 1964 and 1965 of rubella (a.k.a. German measles) led to the birth of tens of thousands of damaged babies. Who discovered that rubella harms fetuses (when pregnant women become infected), and how did he connect those dots? What do you think it takes for a scientist or a doctor to “see” something that others have overlooked?

9. Stanley Plotkin went to great lengths in his quest to develop a German measles vaccine, testing the vaccine in orphans and intellectually disabled children. In this, was he any different from other medical researchers of his era? If so, how?

10. Was Plotkin’s race against drug companies and NIH insiders to get to market with a rubella vaccine a fair fight? Do you think politics still interferes with vaccine or drug development today? Why or why not?

12. Do you believe Leonard Hayflick was right or wrong to take every last vial of the vaccine-making cells he derived from Mrs. X’s fetus as he made his “great escape” from the Wistar Institute to Stanford in the family sedan? What about his character made his flight predictable? Are you on the side of the government or of Hayflick in the struggle for ownership of the cells that followed? Do you think what happened to Hayflick was fair? Why or why not?

13. How does The Vaccine Race leave you feeling about the development of many of the childhood vaccines we take for granted today? About the importance of these vaccines? About the strengths and weaknesses of the human beings who do medical research?

14. In the first seven months of 2019, 1,164 cases of measles, the most wildly contagious vaccine-preventable disease, have been logged in the United States—more than in any whole calendar year since 1992. (https://www.cdc.gov/measles/cases-outbreaks.html) For whom is measles particularly dangerous? What makes parents hesitant to vaccinate their kids? How important is historical memory of the bad old, prevaccine, days?
Learn More About The Vaccine Race
print

How to Survive a Plague

Crisis in the Red Zone

The Mystery of the Exploding Teeth

Anatomy of a Scientific Discovery
Back to Top