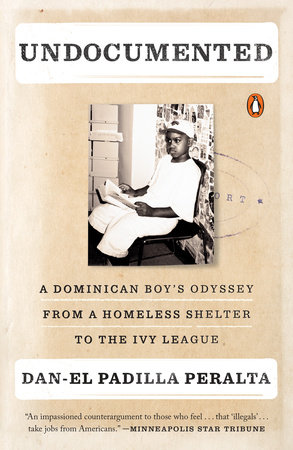 In his memoir, Undocumented: A Dominican Boy’s Odyssey from a Homeless Shelter to the Ivy League, Dan-el Padilla Peralta presents a new version of the immigrant American dream—a young man not only struggling to succeed within his adopted country but struggling to succeed in spite of this country and the obstacles it systematically placed before him. Padilla Peralta’s journey is tender, funny, and inspiring, and it offers a personal and nuanced perspective on an issue that continues to spark debate among lawmakers, cable news pundits, and voters.

Dan-el arrived in New York from the Dominican Republic at the age of four, accompanying his parents on a visa while his mother sought medical care. Three years later, his father returned home but Mrs. Peralta stayed in the country on her expired visa, hoping for a better future in America for her sons. The cost of her decision was immense—undocumented and afraid of being discovered, Dan-el’s family fell into extreme poverty, first living in a homeless shelter, then in a dilapidated apartment in inner-city New York. Despite the crime and drug use that surrounded them, Dan-el and his brother thrived, thanks to their mother’s firm hand, a supportive church community, and the power of education. Dan-el was a voracious reader; his love of learning caught the eye of a volunteer art teacher, and soon, through hard work, scholarships, and connections, he was accepted to Collegiate, one of the best private schools in New York City. From there, doors opened to the finest universities—Princeton, Oxford, and Stanford—as Dan-el’s list of achievements continued to grow.

Padilla Peralta is a lively and likeable storyteller, as unafraid to admit his flaws as he is to champion his own successes. He strikes a conversational tone, spiking his narrative with slang and classical Latin quotations, and he is a loving and proud son who recognizes the enormous sacrifices his mother made. But while his passion for education leaps from the page, so does his growing frustration with the government’s policies. As he approached graduation, Dan-el realized that, despite his accolades, he faced an uncertain future as an undocumented immigrant. So he became adept at navigating his network of academic connections and influential advisers, and after a childhood spent hiding, Padilla Peralta made his undocumented status public, becoming a champion for change.

Throughout his life, Padilla Peralta experienced the extremes of life in the United States: from the confines of a New York City homeless shelter to the hallowed halls of academia, reaching the pinnacle of academic achievement while living in constant fear of deportation. He argues that his success was exceptional but the challenges he faced were not. Reflecting on his achievements and knowing how easily he could have fallen through the cracks, he makes clear that an untold number of undocumented children are being held back from achieving their potential as Americans—a loss for them and for the entire country.

1. What were your views on immigration, and specifically undocumented immigrants, before you read this book? Did your opinion change in any way?

2. While both Dan-el and Yando eventually experience great academic and personal success, their childhoods were marked by extreme poverty, and the legal risk Mrs. Peralta put herself and her children in was enormous. Had you been in her situation, would you have stayed in America or returned to the Dominican Republic?

3. Did you or a member of your family immigrate to the United States.? If so, what was that experience like, and how does it compare with that of Dan-el’s family?

4. Although he describes himself now as an agnostic, religion was a formative influence in Dan-el’s life. What kind of support did the church community offer him that he could not find elsewhere?

5. When speaking from the perspective of his younger self, Padilla Peralta at times uses slang, Spanish, and profanity; later in the book, he includes Latin quotations. What effect do these shifts in voice have on the reader?

6. While reading Breimer’s reference letter for his Princeton application, Padilla Peralta says he tries to ignore the “whispering ghost of race/survivor guilt” (p. 174). What does he mean?

7. Padilla Peralta notes that the media coverage after the Wall Street Journal article was published often painted him as a “Ragged Dick for the twenty-first century” (p. 244). How does Padilla Peralta’s life compare to the famous Horatio Alger novel? Does he agree with this assessment?

8. While Dan-el’s many teachers were hugely influential in his life, he also had a number of nonacademic mentors and family friends who played a part in his success. Who were these individuals and what did they contribute?

9. Did you have a teacher, mentor, or religious figure in your childhood who altered the course of your life? Share your experience.

10. Padilla Peralta says that he has “no intention of ever being only a Dominican, or a minority, or an undocumented immigrant, or a Spanish Harlem resident; or a Collegiate man, a Princeton man, an Oxford man” (294–295); he is a combination of all those identities. How many different identities do you have? How do they relate to each other?

The Girl Who Smiled Beads
Elizabeth Weil and Clemantine Wamariya

America Is in the Heart
Carlos Bulosan

A Journal for Jordan
Dana Canedy