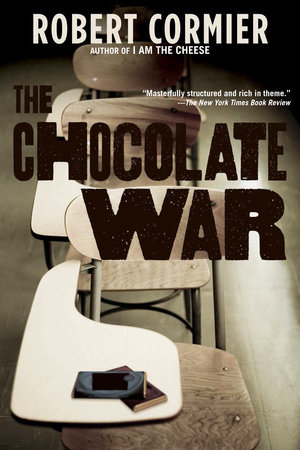 In Robert Cormier’s unforgettable novels, an individual often stands alone, fighting for what is right–or just to survive–against powerful, sinister, and sometimes evil people. His twisty, gripping stories explore some of the darker corners of the human psyche but always with a moral focus and a probing intelligence that compels readers to examine their own feelings and ethical beliefs. The questions that follow are intended to spur discussion and to provoke thoughtful readers to contemplate some of the issues of identity, character, emotion, and morality that make Cormier’s books so compelling.

Tell students that Jerry Renault has a poster in his locker with the following quote from T. S. Eliot’s The Love Song of J. Alfred Prufrock: “Do I Dare Disturb the Universe?” Divide students into small groups and ask them to interpret the quote. What is their universe? Who controls their universe? What price does one pay when they elect to disturb the universe?

"No one who has read Robert Cormier’s young adult novel The Chocolate War can forget the anguish of that final fight under the spotlights at the Trinity School." —The New York Times Book Review

When it was first published, The New York Times Book Review described The Chocolate War as “masterfully structured and rich in theme; the action is well crafted, well timed, suspenseful; complex ideas develop and unfold with clarity.” As this remarkable novel celebrates its 30th anniversary, take the time to rediscover its power and its call for readers to dare to disturb the universe.

Freshman Jerry Renault falls victim to The Vigils, a secret society that controls the social order of the school, when he refuses to participate in a school fund-raising activity.

A freshman at Trinity High School, Jerry Renault is still mourning the death of his mother, struggling to survive on the football team, and searching for a place among his peers. Jerry soon becomes the target of Archie Costello and The Vigils. When Brother Leon, the acting headmaster launches a chocolate sale, The Vigils instruct Jerry to refuse participation for 10 days. Jerry accepts the command, and ponders the question “Do I Dare Disturb the Universe?” For a brief time, Jerry is a hero, but when he refuses to be bullied into selling the chocolates at all, he finds himself in a showdown with Archie, The Vigils, and Brother Leon.

2. Contrast Jerry’s definition of “his universe” at the beginning and the end of the novel.

3. How does Jerry become a martyr by disturbing his universe?

4. Ralph Waldo Emerson wrote, “Do not follow where the path may lead. Go instead where there is no path and leave a trail.” Discuss how Jerry might interpret this quote. How does Emerson promote nonconformity and disturbing the universe? Debate whether Jerry leaves a trail at Trinity.

5. The Chocolate War is one of the most censored books in America. It is under perpetual attack because of Cormier’s “negative portrayal of human nature,” and because the ending appears hopeless. Discuss the objections to the book, and think about how Cormier “disturbed the universe” by writing the novel. Why do people fear a realistic portrayal of life? What is the relationship between looking at the “good and evils” of life to “disturbing the universe”?

6. How do gangs and secret societies like the Vigils use peer pressure to gain power and control?

7. What is the significance of the scene where Jerry encounters the hippies? Discuss how they make him question his place among his peers.

8. How is misinformation about the chocolate sale used to maintain peer pressure? Discuss how this tactic affects Goober, who quit selling the chocolates after 27 boxes.

9. Discuss the relationship between peer pressure and conformity.

12. Discuss the difference between physical and psychological bullying. Which is more damaging?

13. How is Brother Leon a bully? Describe his quiet tactics, and his obsession with getting revenge on Jerry.

14. Why is Jerry Renault an easy target for bullies like the Vigils and Brother Leon? Why doesn’t Archie give “assignments” to most athletes?

15. Discuss why Jerry never explains the phone calls, the missing homework assignment, or the vandalism to his locker to his father.

16. Describe the power of the Vigils. How do they control the social order of the school?

17. Archie Costello is a legend at Trinity High School because he is the “Assigner” for the Vigils. How does this position give him power over the entire student body? How does Archie use manipulation to gain power? How is his power recognized and used by Brother Leon?

18. Brother Leon becomes drunk with power when he is named acting headmaster of Trinity. How is his desire for power in conflict with his training as a priest?

19. Discuss the relationship between power and corruption. How might Goober describe the corruption, or the evil, at Trinity High School?

20. How is Brother Leon’s corruption revealed?

21. How does the opening scene on the football field foreshadow Jerry’s courage?

22. Archie Costello is considered courageous and gutsy. Debate whether he is as courageous as he appears. Why does Archie fear that he may pick a black marble from the box? How might a black marble change his image and position among the Vigils?

23. Discuss how Goober deals with his fear. How might Goober describe Jerry’s courage?

24. How are the Vigils affected when Jerry doesn’t succumb to their fear tactics? Discuss how this leads to his ultimate downfall.

25. Discuss how Jerry might reflect upon his own courage at the end of the novel.

26. The first sentence of this book is "They murdered him." In what ways does this small sentence apply to the book as a whole? Who is murdered, metaphorically, in the book? By whom?

27. There are no main female characters in this book, partly because Trinity is a boys’ school. Yet the Trinity boys often discuss girls. Jerry wishes he could talk to the girl near the bus stop. Janza watches girls as they walk by, and Archie won’t let anyone touch him except certain girls. What function(s) do you think girls play in the novel?

28. Why do you think Archie is repulsed by human sweat? What do you think this says about Archie as a person?

30. Discuss the significance of the title. Why is it a chocolate "war"?

31. Why do you think Jerry decides not to sell the chocolates even after his assignment is over? Have you ever dared to "disturb the universe"? What happened?

32. How do you feel about how Brother Leon treated Bailey? At the end of the class Brother Leon says that the students had allowed him to turn the class into Nazi Germany. Do you think this is a true statement?

Robert Cormier (1925—2000) has been called “the single most important writer in the whole history of young adult literature.” His many acclaimed books include The Chocolate War, I Am the Cheese, After the First Death, Beyond the Chocolate War, Fade, The Bumblebee Flies Anyway, We All Fall Down, Tunes for Bears to Dance To, In the Middle of the Night, Other Bells for Us to Ring, 8 + 1, Tenderness, Heroes, Frenchtown Summer, and The Rag and Bone Shop. His books have won many awards and have been translated into several languages, becoming modern classics. In 1991, the Young Adult Services Division of the American Library Association presented him with the Margaret A. Edwards Award, honoring his lifetime contribution to writing for teens.


From the Paperback edition.

other books by Robert Cormier
All Grades 6 up

Trash
Back to Top