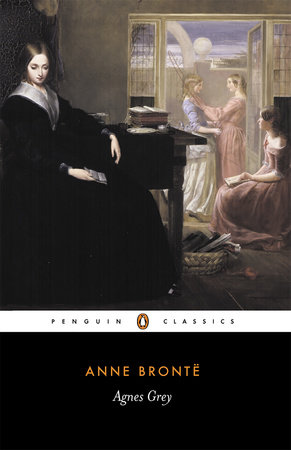 Published in 1847, Anne Brontë’s first novel exposes with remarkable realism the hardships and exploitation endured by governesses in Victorian England. In a narrative that drew heavily on her own experience, Brontë’s goal was not to amuse or to entertain but, as Agnes Grey says, to benefit those whom it might concern—governesses themselves, whose numbers were rapidly growing in the late nineteenth century, and the British aristocracy who employed them. Because of the great imbalance in the ratio of women to men in England, with so many men living and working abroad in the far reaches of the British Empire, thousands of women were unable to marry. This problem was compounded by the strong social stigma against women working and the extremely limited professions to which they were admitted. Increasingly, out of desperation, women became governesses, accepting terms that would leave them exhausted, impoverished, and socially outcast. Brontë sought to make their plight visible to the English public and to arouse the kind of compassion that might lead to reform.

But Agnes Grey is hardly a didactic novel. By rendering the daily life of her protagonist with such vivid detail, and in a tone that is coolly restrained, Brontë lets Agnes Grey’s experience speak for itself. Abused by the children she is enjoined to teach, treated with derisive arrogance by the men and women who employ her, Agnes lives in a world without friends, adrift between the servant and the genteel classes, at home in neither. But it is the cruelty, vanity, and moral emptiness of the upper classes that the novel exposes most unsparingly. In her first position, with the Bloomfield family, young master Tom is shown to be a budding sociopath who delights in torturing helpless animals and is spurred on in this activity by his elders, who either merely condone the behavior or actively applaud it. When Agnes intervenes to spare a nestful of baby birds from Tom’s sadism, Uncle Robson says: “Curse me, if I ever saw a nobler little scoundrel than that. He’s beyond petticoat government already;—by G—, he defies his mother, granny governess, and all! Ha, ha, ha. Never mind, Tom, I’ll get you another brood tomorrow’” (p. 105). In her second place of employment, with the Murrays, Agnes tries and fails to reform young Rosalie, who derives a similar enjoyment from causing pain. The beautiful Miss Murray delights in playing the coquet with her suitors, manipulating their affections for the sole purpose of dashing their hopes and reveling in the suffering she causes them. When not actively cruel, Rosalie is often deeply unfeeling, a woman who regards her servants as “mere automatons” (p. 233). In such a world, a governess is considered only slightly more human than a servant and only slightly more deserving of sympathy than a nestful of baby birds.

Against this moral vacuum, Brontë places the love story between Agnes and the curate Edmund Weston. Unlike the cold-hearted and self-serving characters that surround them, Agnes and Edmund exemplify the Christian virtues of compassion, charity, and brotherly love. In their visits to the elderly widow Nancy Brown, both Edmund and Agnes demonstrate the ability—and the willingness—to feel the suffering of others and to do what is in their power to alleviate it. That they visit Nancy independently but also chance to experience their first meeting in Nancy’s humble dwelling is perfectly appropriate. Theirs will be a relationship based on a higher purpose, their love for each other rooted in a more selfless love for all their fellow beings, human and nonhuman alike. Indeed, how animals are treated in the novel offers a telling glimpse into Brontë’s moral critique of the English aristocracy. While his predecessor, Mr. Hatfield, kicks Nancy’s cat when it seeks his affection, Edmund caresses it and in fact rescues it from being shot by the gamekeeper. Similarly, Agnes takes care of the puppy, Snap, that Rosalie can’t be bothered to raise, and when it is given away to the rat-catcher, Edmund performs another rescue, saving the dog from a terrible fate. When Edmund is reunited with Agnes on the sands, it is Snap who leads the way to her.

Agnes Grey may be read in many ways—as an exposé of the plight of the English governess, as a searing indictment of the materialism and lack of empathy at the heart of Victorian values, and as a love story in which kindness and compassion are rewarded and vanity and heartlessness are punished. It is a testimony to Anne Brontë’s brilliance as a writer that she could seamlessly merge these themes into a narrative that is driven by a high purpose and simultaneously is such a pleasure to read.

ABOUT THE BRONTË SISTERS

Anne Brontë was born in 1820 and raised in the Yorkshire village of Haworth where her father was curate. She was educated at home and, as a child, she invented—with her sister Emily—the imaginary world of Gondal, for which she wrote copious chronicles and poems. After attending boarding school for two years, she left Haworth at the age of nineteen to work as governess, first with the Inghams at Blake Hall and, from 1840–45, with the Robinson family at Thorp Green. She drew heavily on her experience as a governess for her first novel, Agnes Grey, published under the pseudonym Acton Bell in 1847. The novel appeared in a single volume with her sister Emily’s Wuthering Heights. While critical reaction to Wuthering Heights was fiercely negative, reviewers barely noticed Agnes Grey, and most simply compared it unfavorably to Charlotte Brontë’s Jane Eyre, a more romantic novel which also deals with the life of a governess and which had created a literary sensation earlier in the year. Many aspects of Anne’s life find their way into Agnes Grey. Like her heroine, Brontë also wrote poetry. Brontë was the daughter of a curate and, like Agnes, seems to have fallen in love with another curate, William Weightman, who became an assistant priest in her father’s parish in 1839, and may have served as the model for Edmund Weston in Agnes Grey. Many other details of Anne’s character, home life, and education correspond to those of Agnes Grey.

Brontë’s second novel, The Tenant of Wildfell Hall (1848) offers a powerful feminist critique of marriage laws and the crushing limitations and double standards that governed sexual morality and the education of men and women in Victorian England.

Anne Brontë’s creative life was cut short when she died at Scarborough in 1849 of pulmonary tuberculosis at the age of twenty-nine. Long overshadowed by her more widely read and highly esteemed sisters, Anne Brontë is at last receiving the critical attention she deserves.


1.  Brontë begins her novel by writing that “All true histories contain instruction” (p. 61). What is Brontë’s purpose in writing the novel? In what ways is the book instructive? In what ways is it subversive?
2.  In her introduction to Agnes Grey, Angeline Goreau asserts that, “Through her ‘simple’ exposition of the case of the governess, Anne Brontë also gave her contemporaries an indictment of the ruthless materialism at the heart of Victorian life” (p. 45). Where is this “ruthless materialism” most keenly felt in the novel? How does it affect Agnes?
3.  What are the chief hardships Agnes faces as a governess? How does she feel about the injustices done to her? How does she respond to them?
4.  How are the upper and lower classes depicted in the novel? What are the major differences, for example, between Brontë’s portrayals of Nancy Brown and Rosalie Murray?
5.  Rosalie says that her husband Sir Thomas has never forgiven her for giving birth to a girl. What picture emerges in Agnes Grey of gender roles in Victorian England? In what ways are boys and men treated differently, and valued differently, than girls and women in the novel? What roles were available to women in Victorian England?
6.  When Agnes objects to Tom’s desire to torture baby birds, Mrs. Bloomfield replies: “You seem to have forgotten that the creatures were all created for our convenience” (p. 105). What does this statement suggest about the worldview of the English aristocracy? What are the immediate and ultimate consequences of such a worldview? Where do such beliefs come from?
7.  In what ways does Edmund Weston differ from the rector, Mr. Hatfield? What do their vastly different responses to Nancy’s religious doubts reveal about how each views the essence of Christianity?
8.  Why are Edmund and Agnes so drawn to each other? In what ways are they an ideal, or perhaps idealized, match? How do their values, principles, and behavior set them apart from the most of the other major characters in the book?
9.  Why does Rosalie derive such enjoyment from misleading and tormenting her suitors? Does Brontë manage to make her a sympathetic character in spite of her vanity and lack of empathy?
How are animals treated in the novel? In what ways do animals illuminate the moral characters of the human beings who interact with them?
10.  How might Anne Brontë view the situation of women today? What contemporary issues might move her to write a novel similar to Agnes Grey?

Caleb Williams
Back to Top