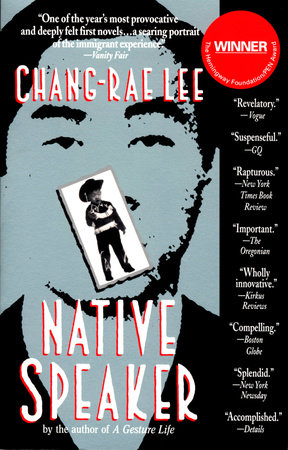 Korean American Henry Park is “surreptitious, B+ student of life, illegal alien, emotional alien, Yellow peril: neo-American, stranger, follower, traitor, spy…” or so says his wife, in the list she writes upon leaving him. Henry is forever uncertain of his place, a perpetual outsider looking at American culture from a distance. And now, a man of two worlds, he is beginning to fear that he has betrayed both—and belongs to neither.

“A novel of extraordinary beauty and pain…nothing less than brilliant.” —Frederick Busch

“With echoes of Ralph Ellison, Chang-rae Lee’s extraordinary debut speaks for another kind of invisible man: the Asian immigrant in America…a revelatory work of fiction.” —Vogue

In Native Speaker, author Chang-rae Lee introduces readers to Henry Park. Park has spent his entire life trying to become a true American—a native speaker. But even as the essence of his adopted country continues to elude him, his Korean heritage seems to drift further and further away.

Park’s harsh Korean upbringing has taught him to hide his emotions, to remember everything he learns, and most of all to feel an overwhelming sense of alienation. In other words, it has shaped him as a natural spy.

But the very attributes that help him to excel in his profession put a strain on his marriage to his American wife and stand in the way of his coming to terms with his young son’s death. When he is assigned to spy on a rising Korean-American politician, his very identity is tested, and he must figure out who he is amid not only the conflicts within himself but also within the ethnic and political tensions of the New York City streets.

Native Speaker is a story of cultural alienation. It is about fathers and sons, about the desire to connect with the world rather than stand apart from it, about loyalty and betrayal, about the alien in all of us and who we finally are.

Chang-rae Lee’s Native Speaker won the Hemingway Foundation/PEN award, QPB’s New Voices Award, the Barnes & Noble Discover Great New Writers Award, an American Book Award from the Before Columbus Foundation, and the Oregon Book Award. It was also an ALA Notable Book of the Year and a finalist for a PEN West Award, and Lee was named a finalist for Granta’s Best American Novelists Under 40 Award. His work has appeared in The Best American Essays, The New Yorker, The New York Times, and numerous anthologies. He lives in New Jersey, and is the director of the MFA program at Hunter College in New York City.

What Is the What
Back to Top