The Door in the Wall Teacher’s Guide 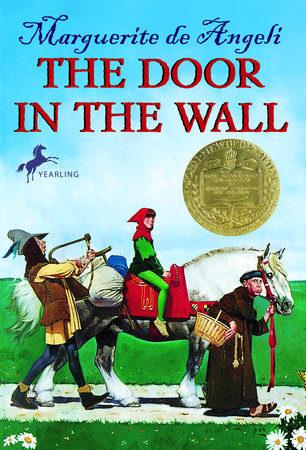 The Door in the Wall Teacher’s Guide

print
The Door in the Wall Teacher’s Guide

Ever since he can remember, Robin has been told what is expected of him as the son of a nobleman: he must become a knight. But Robin’s destiny is changed forever when he falls ill and loses the use of his legs.

Marguerite de Angeli was born in Lapeer, Michigan, in 1889. She spent most of her life in Philadelphia, where she trained as a singer before she married John de Angeli in 1910. Over a 50-year career, she published 30 children’s books, most of which are about ethnic children in America.The Door in the Wall, her only book set outside the United States, received the Newbery Medal in 1950. Marguerite de Angeli died in 1987 at the age of 92.

Students can deepen and extend their knowledge of the Middle Ages by studying this novel. In addition to being a perfect connection to the social studies curriculum, this novel may also be linked to the language arts, science, drama, art, and music curriculum. Along with its fascinating historical setting, The Door in the Wall contains several themes worth noting: overcoming adversity, finding one’s place in the world, doing one’s best, and intergenerational relationships. In the spirit of the novel, allow students to discover and explore these themes on their own.

Ask students to brainstorm what they know about the Middle Ages. It may be necessary to give them a few hints, such as knights and castles, to get them started. List what they know on a flip chart and add to the list as they read and discover more about this time period.

Challenges (Overcoming Adversity)
Brother Luke tells Robin to always remember that "Thou hast only to follow the wall far enough and there will be a door in it" (p. 16). Along the way, Brother Luke points out many "doors in the wall" or ways to overcome adversity, such as reading (p. 29) and crutches (p. 38). Encourage students to generate a list of other ways that Robin learns to help himself. The list might be transferred to an illustrated poster and hung in the classroom.

Self-Discovery (Finding One’s Place in the World)
The feudal system was a strict social structure that defined each person’s place in the world according to social class. As the son of a nobleman, Robin is expected to become a knight and serve the king but feels that he will make a sorry page (p. 71). Interested students might study the feudal system and make a list of possibilities open for a boy such as Robin. How is the theme of finding one’s place in the world relevant in today’s society?

Self-Esteem (Doing One’s Best)
Robin is continually encouraged to do his best. Sir Peter tells him, "If we do what we are able, a door always opens to something else" (p. 71). Brother Luke tells Robin that success is measured by what we do with what we have (p. 76). What enables Robin to do his best? Students may wish to discuss this question in a small group and report their conclusions to the class.

Family and Relationships (Intergenerational Relationships)
Most of Robin’s relationships are with adults. As a child of the privileged class, he is used to having adults serve and teach him. Although impatient with Dame Ellen, he is generally respectful toward adults. Ask students to describe Robin’s interactions with Brother Luke, John-go-in-the-Wynd, and Sir Peter. What are his feelings toward each of these characters?

History
The feudal system formed the core of medieval society. Students will learn about this society from the novel, but they can expand their knowledge by researching the following topics: serfs, peasants, clergy, nobles (knights and ladies), and royalty (kings and queens). The students may wish to work in small groups for their research. Have each group create a visual to communicate their findings.

Edward III is the king of England when this story takes place. Students can discover a bit about him from the context of the story. They may also enjoy doing further research on him and sharing their findings with the class.

Geography
Ask students to estimate where the town of Lindsay is located on a map of England. Encourage them to search for clues in the novel.

Language Arts (Reading)
Brother Luke describes reading as one of the "doors in the wall." In a class discussion, consider how in today’s society the inability to read creates walls for people. Ask students to contact their local literacy society and find out what programs are available in their community to help people learn to read.

Science
The Black Death, or bubonic plague, occurred in Europe from 1347-1349. Have students conduct research to answer the following questions: What exactly was this disease? How was it spread? Why was it so devastating? How did it affect London? Name other deadly epidemics that have affected various societies.

Art
Students interested in architecture may want to read informational books about castles to help them understand how these fortresses were constructed. Drawing and labeling a diagram of a castle for classroom display may help students learn more about the intricacies of medieval castles.

Music
John-go-in-the-Wynd is a minstrel. A student particularly interested in music may want to share recordings of medieval harp music with the class. If possible, find recordings of the songs that John mentions, "Love a Garland Is" and "Lament of a Lass."

Because the Catholic Church is intricately related to life in the Middle Ages, The Door in the Wall contains many words and phrases associated with the church. Have the class make a list of these terms and define them by using clues found within the context of the story. If possible, invite a Catholic cleric to speak to the class about the church-related vocabulary used in the book.

"An enthralling and inspiring tale of triumph over handicap. Unusually beautiful illustrations, full of authentic detail, combine with the text to make life in England during the Middle Ages come alive." –The New York Times

"One has a feeling of the authenticity of the pageantry and atmosphere of medieval England . . . the illustrations are beautifully handled. . . ." –Kirkus Reviews

"A poignant story, full of action, and a strongly painted canvas of the times as well." –The New Yorker


Learn More About The Door in the Wall
print

Between Shades of Gray
Ruta Sepetys

Luck of the Titanic
Stacey Lee

The Passion of Dolssa
Julie Berry

You’ll Be the Death of Me
Karen M. McManus

A Sky Beyond the Storm
Sabaa Tahir

Skin of the Sea
Natasha Bowen

The Bone Spindle
Leslie Vedder
Back to Top