Not My Daughter Reader’s Guide 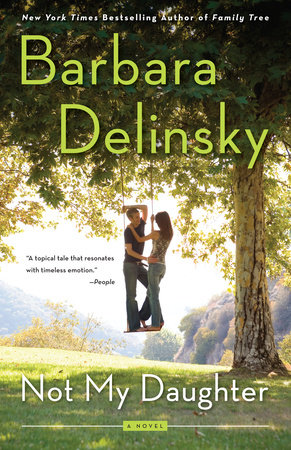 Not My Daughter Reader’s Guide

print
Not My Daughter Reader’s Guide

The questions and topics that follow are designed to enhance your book club’s discussion of Barbara Delinsky’s Not My Daughter. We hope they will enrich your experience of this compelling novel.

No writer captures the tender rewards and unique challenges of family life better than Barbara Delinsky. Raising provocative questions about motherhood, Not My Daughter marks new heights of captivating storytelling for Delinsky. In the novel’s opening pages, high school principal Susan Tate confronts a devastating secret. Her seventeen-year-old daughter, Lily, has revealed that she is expecting a baby—and that this is not an accidental pregnancy. Susan soon learns that some of Lily’s friends are pregnant, too: they’ve made a pact to become moms in high school, intentionally having unprotected sex. Naïve but determined, they yearn to raise their babies on their own, and to keep the fathers away for as long as possible. For Susan, the news threatens to destroy her career. Once a teen mom herself, she has launched high-proﬁle campaigns to educate students about preventing unwanted pregnancy. Then Lily makes a frightening discovery about the baby she is carrying, and she and Susan begin to see their futures in a new way. Gripping and heartwarming, Not My Daughter will keep you enthralled on every page.

1. What do the novel’s opening pages tell you about Susan’s relationship with her daughter? What advantages and disadvantages did Susan experience as a single parent? Would you have married Rick at age eighteen if you had been in her situation?

2. How does Susan’s life compare to the lives of the other moms in the book: Kate, Sunny, and Pam? What do their daughters (Lily, Mary Kate, Jess, and Abby) have in common? Are there any similarities between the way the mothers interact and the girls’ circle of friendship?

3. How did you react when Abby revealed why she had wanted to form a motherhood pact with her friends? What longings were they each hoping to satisfy by becoming pregnant? Were they seeking unconditional love, or rebellion against their parents, or something else altogether? How did their motivations change throughout the novel?

4. Though Not My Daughter is entirely a work of ﬁction, in the summer of 2008 media coverage erupted over a group of teenage girls in Gloucester, Massachusetts, who were alleged to have made a pact to become pregnant and raise their babies together. What does this say about the way our idea of motherhood has changed over generations? Do pregnancy and parenting mean something different to modern women, compared to our grandmothers’ generation?

5. Jess’s extended family is full of interesting contradictions. How was she shaped by Samson and Delilah, and by the ongoing friction between them and Sunny? Is Sunny right to think of Martha and Hank as “Normal with a capital N”? How does Jess deﬁne “normal,” based on her family life?

6. The girls have unrealistic ideas about how much it costs to raise a child. Already living on a tight budget, Will and Kate are especially upset by the financial implications of Mary Kate’s news. How does money affect parenting? Who are the best parents in the novel?

7. How did Rick and Susan’s relationship change over time? Is Lily the only reason they stayed connected, or were there other constants that gave them an emotional attachment into adulthood?

9. How is Lily transformed by the unsettling news of her fetus’s CDH? Was she prepared for the ultimate parenting job of managing a crisis and responding to events that are beyond her control?

10. Why does Lily resist Robbie? Is there a difference between girls’ and boys’ responsibilities when a teen pregnancy occurs? Should fully adult dads have more rights than teenage ones?

11. PC Wool represents a dream fulﬁlled for Susan. What do the colors, the creativity, and the camaraderie mean to her? If Perry & Cass is a metaphor for family, what kind of family is it? How was Abby affected by her parents’ wealth, and the Perry legacy?

12. Discuss the relationship between Susan and her brother, Jackson. Why do he and Ellen have so much animosity toward her? How does Lily feel about family after she attends her grandfather’s funeral? How does Susan’s understanding of her mother change with the revelation that Big Rick and Ellen were once very close?

13. How did you respond to George Abbott’s editorial in the Zaganack Gazette? Was Susan in any way responsible for Lily’s pregnancy? Who is responsible for preventing teen pregnancy: schools? parents? the media? someone else? On some level, was Lily trying to embarrass her mother by letting history repeat itself?

14. Discuss the novel’s title and the way it captures some parents’ belief that their children are immune from peer pressure. How much do you trust your children? How much did your parents trust you?

15. How did the epilogue compare to the ending you had predicted? What did all children in the novel (adults and infants alike) teach their mothers?

16. What truths about the gifts of motherhood are illustrated in Not My Daughter, and in other novels by Barbara Delinsky? What is special about the way she portrays the bonds between parents and their children?

Barbara Delinsky is the author of more than seventeen bestselling novels with over twenty million copies in print. She has been published in twenty-five languages worldwide. Barbara lives with her family in New England.

While My Sister Sleeps and The Secret Between Us by Barbara Delinsky; Family Tree by Barbara Delinsky; Midwives by Chis Bohjalian; Commencement by J. Courtney Sullivan; Whitehorn Woods by Maeve Binchy; House Rules by Jodi Picoult; Die For You by Lisa Unger
Learn More About Not My Daughter
print

While My Sister Sleeps
Barbara Delinsky

A Week at the Lake
Wendy Wax

The Beginner’s Goodbye
Anne Tyler
Back to Top