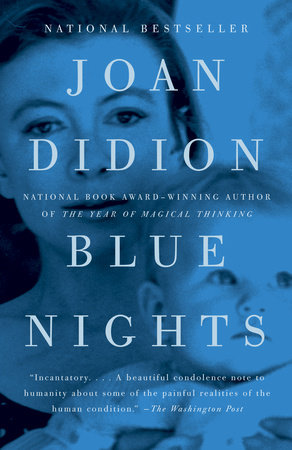 The introduction, discussion questions, and suggested further reading that follow are designed to enhance and inform your group’s discussion of Joan Didion’s Blue Nights, a heart-wrenching book about the death of her daughter Quintana Roo.

Some books cut to the quick of human existence, to the essence of human suffering—loss, grief, illness, fear of death, death itself. Blue Nights is such a book, Joan Didion’s unflinching account of the death of her daughter, still in her thirties, and her own struggles not only with the worst grief a parent can endure but with her own illness and aging.

Early in the book, Didion sets down three stark quotations: Napoleon, “It is horrible to see oneself die without children”; Euripides, “What greater grief can there be for mortals than to see their children dead”; and finally Didion herself, “When we talk about mortality we are talking about our children” [p.13]. Blue Nights draws out the full implications of each of these statements.

The book begins on the seventh anniversary of Quintana’s marriage, a joyous occasion vividly remembered, which gives way to other memories and digressions: the move from California back to New York City, leaving the “suburbia house,” as Quintana had called it; the unexpected and exaggerated emotion Didion feels about changing licenses; memories of her husband’s cardiac procedures; of herself collapsing on the street three weeks before the wedding; of the red soles of Quintana’s satin shoes as she knelt at the altar; of the twenty months Quintana would spend in the ICUs of several hospitals before her death.

Much of Blue Nights proceeds in this meandering, associative way, as Didion orchestrates a kind of musical layering, building detail upon detail, memory upon memory, digression upon digression, moving back and forth between past and present, deep past and recent past, and fears of the future. This shifting narrative structure mirrors the wavering, nonlinear quality of reveries, the way the mind circles, comes close, turns away, and circles back to its main subject. Perhaps, Didion seems to say, overwhelming grief can be approached only in this circuitous way, though she longs for a directness she feels is now beyond her. Certain sentences recur as refrains, which Didion seems to speak as much to herself as to her readers, as if to keep her tethered to the story she must tell.

Filled with questions and self-questioning, Blue Nights takes on the quality of an extended self-interrogation as Didion pours over Quintana’s life, her own role as a mother, what she failed to see, what she might have done differently. “You have your wonderful memories,” people tell Didion [p. 64], as if such memories might provide solace rather than painful reminders of all that has been lost. Instead, Didion recites a rosary of what she perceives as her failures as a mother and confronts her own illness, aging, and diminishing power with remarkable courage.

Such diminishment, however arrestingly presented, is belied by the book itself, which explores grief, loss, illness, and aging with extraordinary power.

1. Blue Nights is a deeply elegiac, heartrending book. What are some of its most emotionally powerful moments? What makes these moments so moving?

2. Didion’s style in Blue Nights is clipped, austere, emotionally restrained. What is the effect of the short sentences, short chapters, and paragraphs that often consist of a single sentence? In what ways is Didion’s tone and style appropriate to her subject?

3. A number of italicized statements recur throughout Blue Nights, consisting most often of things that Quintana said—“Let me just be in the ground”; “Like when someone dies, don’t dwell on it”; “After I became five, I never ever dreamed about him.” What is the emotional effect of these repetitions? Why would Didion keep repeating these lines?

4. Didion writes: “My cognitive confidence seems to have vanished altogether. Even the correct stance for telling you this, the ways to describe what is happening to me, the attitude, the tone, the very words, now elude my grasp. The tone needs to be direct. I need to talk to you directly, I need to address the subject as it were, but something stops me…. Am I no longer able to talk directly?” [p. 116]. Is the tone of Blue Nights direct or indirect? Why might Didion find it difficult to be as direct as she wants to be about her subject?

5. Didion quotes Euripides: “What greater grief can there be for mortals than to see their children dead” [p. 13]. In what ways does Blue Nights bear out this truth? Of all the griefs that humans might be forced to endure why is this the most painful?

6. What kind of child was Quintana? What was most remarkable about her and most painful about her loss?

7. Thinking back to Quintana’s wedding, Didion writes: “I still see from that wedding day at St. John the Divine: the bright red soles on her shoes. She was wearing Christian Louboutin shoes, pale satin with bright red soles. You saw the red soles when she kneeled at the altar” [p. 69]. What is the effect, on Didion and on the reader, of these minute but vividly remembered details? What other details seem especially poignant?

8. Didion says she knows very few people who think of themselves as having succeeded as parents, that most parents instead “recite rosaries of failures, our neglects, our derelictions and delinquencies” [p. 93]. What does Didion most regret about her relationship with Quintana? What does she see as her failures?

9. Why might Quintana have seen her mother as “frail,” as needing her care, rather than the reverse? [p. 101].

10. Didion says that she had initially wanted to write a book about children but that after she started it became clear her true subject was “the failure to confront the certainties of aging, illness, death” [p. 54]. What does the book say about these essential human themes? Does Didion fail to confront them?

11. Blue Nights is filled with digressions—about movie shoots, changes in parenting styles over the past fifty years, her own work in the theatre, Sophia Loren, etc.—but keeps circling back to the death of her daughter and to her own illness and aging. Why might Didion have chosen this kind of structure, rather than a more straightforward chronological approach?

12. Didion describes her own illnesses and medical emergencies in a remarkably matter-of-fact way. Why is this understated approach more powerful than a more dramatic rendering might be?

13. What is so powerful about Didion’s quandary over who to list as an emergency contact on a medical form? What reveries does this question lead to?

14. Why does Didion end the book with a series of single, short sentences? Does she achieve here the kind of emotional directness she earlier felt was beyond her?

Joan Didion was born in Sacramento, California, and now lives in New York City. She is the author of five novels and eight previous books of nonfiction. Her collected nonfiction, We Tell Ourselves Stories in Order to Live, was published by Everyman’s Library in 2006.

I Feel Bad About My Neck
Back to Top