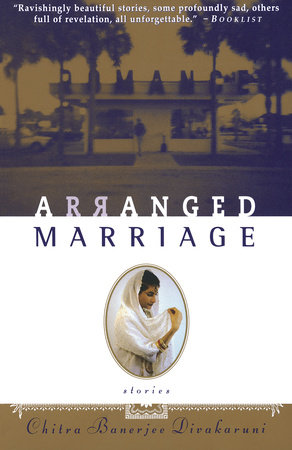 Divakaruni’s exquisitely wrought debut collection of stories chronicles the assimilation–and rebellion–that Indian-born girls and women in America undergo as they balance old treasured beliefs and surprising new desires. For the young girls and women brought to life in these stories, the possibility of change, of starting anew, is both as terrifying and filled with promise as the ocean that separates them from their homes in India. From a young bride whose fairy-tale vision of California is shattered when her husband is murdered to a proud middle-aged divorcée determined to succeed in San Francisco, Divakaruni paints eleven devastating portraits of women on the verge of an unforgettable transformation.

1. How do the physical and psychological landscapes of India and America differ in these stories?

2. "The Word Love" is written in second person. What does this unusual choice of voice add to the meaning and impact of the story?

3. The mother-daughter relationship is a central theme in many of these stories. Is the author making a general comment about this relationship?

4. Most of the stories in this collection focus on women who are in serious danger, be it physical, emotional, or both. Do the stories leave you reason to be hopeful for these women? How?

5. Do the women in these stories view themselves as having choices? Are they correct in their views, or are they deluding themselves?

6. For Discussion: Divakaruni’s Novels and Stories

7. In the story "Affair," Abha says, "It’s not wrong to be happy, is it? To want more out of life than fulfilling duties you took on before you knew what they truly meant?" How is this idea further developed in The Mistress of Spices? In Sister of My Heart?

8. In Divakaruni’s stories, women are wives and mothers, but the men are portrayed primarily as husbands, not fathers. How are the men’s roles in the novels similar to or different from those in the stories?

9. How does the Indian immigrant experience compare to that of other immigrants–Spanish, Italian, Chinese?

The Purple Swamp Hen and Other Stories
Penelope Lively

The News from Spain
Joan Wickersham

For the Relief of Unbearable Urges
Nathan Englander

The Delight of Being Ordinary
Roland Merullo

Barbara the Slut and Other People
Lauren Holmes

Dusk and Other Stories
James Salter

The Woman Who Borrowed Memories
Tove Jansson
Back to Top