The Mistress of Spices Reader’s Guide 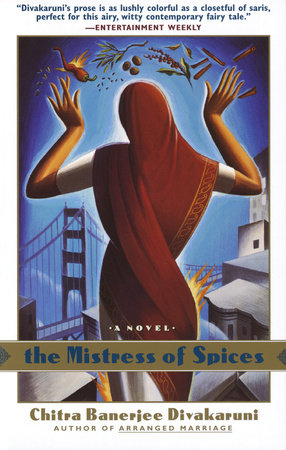 The Mistress of Spices Reader’s Guide

In The Mistress of Spices, Divakaruni tells the story of Tilo, a young woman born in another time, in a faraway place, who is trained in the ancient art of spices and ordained as a mistress charged with special powers. Once fully initiated in a rite of fire, the now immortal Tilo–in the gnarled and arthritic body of an old woman–travels through time to Oakland, California, where she opens a shop from which she administers spices as curatives to the local Indian community.

Although it is her duty to remain emotionally detached, Tilo breaks the rules of the spices and is drawn into the lives of the customers in her shop, helping them through their spirals of trouble: abusive husbands, racism, generational conflicts, drug abuse. And when an unexpected romance blossoms with a handsome stranger, Tilo is forced to choose between the supernatural life of an immortal and the vicissitudes of modern life. Spellbinding and hypnotizing, The Mistress of Spices is a tale of joy and sorrow and one special woman’s magical powers.

1. The New York Times Book Review states that The Mistress of Spices "becomes a novel about choosing between a life of special powers and one of ordinary love and compassion." Did Tilo choose correctly? Why or why not?

2. How do the spices become characters in the novel?

3. Tilo only speaks her name out loud to one person in the novel. What is the significance of this action? What role do names play in the novel?

4. What do the spices take from Tilo? What do they give her? Is it a fair exchange?

5. Tilo left her shop for the first time early in the novel to look at Haroun’s cab. But later she is drawn even further out by Raven. Was her course already set at that point? Would she have left again even without Raven’s pull?

6. In what ways is punishment seen as a natural force in this novel? How are punishment and retribution tied to balance?

8. Divakaruni chose to write The Mistress of Spices in the first person present tense. Does this point of view add or detract from the story?

9. What passages of the novel resemble poetry? How does Divakaruni make use of lyricism and rhythm?

10. What role does physical beauty play in this story? In Tilo’s feelings about her body? About Raven? About the bougainvillea girls?

11. Does Raven’s story (pp. 161-171) differ from Tilo’s story of her past at the points where she tells it? Do these differences say anything about the differences between women and men, or between Indians and Americans?

12. How are physical acts of violence and disaster foreshadowed in the novel? What is the significance of foreshadowing in Indian culture?

13. For Discussion: Divakaruni’s Novels and Stories

14. In the story "Affair," Abha says, "It’s not wrong to be happy, is it? To want more out of life than fulfilling duties you took on before you knew what they truly meant?" How is this idea further developed in The Mistress of Spices? In Sister of My Heart?

15. In Divakaruni’s stories, women are wives and mothers, but the men are portrayed primarily as husbands, not fathers. How are the men’s roles in the novels similar to or different from those in the stories?

16. How does the Indian immigrant experience compare to that of other immigrants–Spanish, Italian, Chinese?

After the Sun
Jonas Eika

South of the Border, West of the Sun
Haruki Murakami

The Widows of Eastwick
John Updike
Back to Top