The Woman Behind the New Deal Reader’s Guide 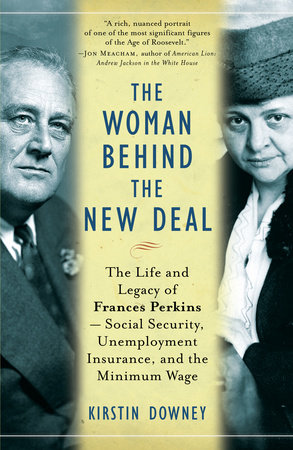 The Woman Behind the New Deal Reader’s Guide

print
The Woman Behind the New Deal Reader’s Guide

“A rich, nuanced portrait of one of the most significant figures of the Age of Roosevelt.” —Jon Meacham, author of American Lion: Andrew Jackson in the White House

The introduction, questions, and suggestions for further reading that follow are designed to enhance your group’s discussion of The Woman Behind the New Deal by Kirstin Downey.

One of Franklin Delano Roosevelt’s closest friends and the first female secretary of labor, Perkins capitalized on the president’s political savvy and popularity to enact most of the Depression-era programs that are today considered essential parts of the country’s social safety network.

Frances Perkins is no longer a household name, yet she was one of the most influential women of the twentieth century. Based on eight years of research, extensive archival materials, new documents, and exclusive access to Perkins’s family members and friends, this biography is the first complete portrait of a devoted public servant with a passionate personal life, a mother who changed the landscape of American business and society.

Frances Perkins was named secretary of labor by Franklin Roosevelt in 1933. As the first female cabinet secretary, she spearheaded the fight to improve the lives of America’s working people while juggling her own complex family responsibilities. Perkins’s ideas became the cornerstones of the most important social welfare and legislation in the nation’s history, including unemployment compensation, child labor laws, and the forty-hour work week.

Arriving in Washington at the height of the Great Depression, Perkins pushed for massive public works projects that created millions of jobs for unemployed workers. She breathed life back into the nation’s labor movement, boosting living standards across the country. As head of the Immigration Service, she fought to bring European refugees to safety in the United States. Her greatest triumph was creating Social Security.

Written with a wit that echoes Frances Perkins’s own, award-winning journalist Kirstin Downey gives us a riveting exploration of how and why Perkins slipped into historical oblivion, and restores Perkins to her proper place in history.

1. Why is Frances Perkins a forgotten figure in history? Is a deep-rooted sexism to blame, because people are reluctant to credit a woman’s obvious successes? Is her antipathy to reporters the problem? Did she seem to consciously hide herself, knowing that much more can be done in Washington if people are willing to let others take the credit? Why were so many men of her era and later generations, even New Deal scholars, willing or eager to dismiss her importance? Is a woman’s lack of physical beauty an impediment to fame?

2. Frances Perkins reinvented herself in a remarkable series of ways: She changed her name from Fannie to Frances; she converted from the Unitarian Church to the Episcopalian church, she changed from the Socialist to the Democratic party, she changed her appearance to be more matronly; she even changed her age. Was she being cynical or slippery about her true identity in making these changes, or did they reflect a frank awareness of the obstacles she faced unless she made these adaptations?

3. Perkins’s public persona was somewhat stiff and fusty, both in appearance and in speech—quite in contrast to her vivacious qualities in private. Was her public character necessary for a woman in power at that time? Did it help or hinder her effectiveness?

4. Frances Perkins and Eleanor Roosevelt were colleagues who worked together for a lifetime and shared the same political viewpoints, but they were never close friends. Why? Is it likely that two such powerful women were naturally competitive with each other? Did they in some ways compete for FDR’s affections? Was Frances Perkins envious of Eleanor’s easy affluence, when she had to struggle to survive? Was Eleanor jealous of Frances’s close relationship with her husband, who greatly respected Frances and consulted her before making major political decisions, including who to select for vice president? Were they just two different kinds of women—with Eleanor more open and easy with people, and Frances more secretive and inscrutable? Were their educational differences—Frances had a graduate degree, and Eleanor had a finishing-school education—a source of conflict?

5. What explains Frances Perkins’s close relationship with Franklin? Did she love him in some way, or did she sometimes seem to view him as an older sister would a wayward younger brother? Why was Franklin so uniquely able to see the talents and abilities of the women around him?

6. Should Frances Perkins have more astutely cultivated the press? First Lady Eleanor Roosevelt and U.S. Congresswoman Mary Norton realized that reporters needed quick and easy stories they could deliver to their editors, and that woman reporters, relegated to the society pages, particularly needed to be fed material about clothes, hats, and family arrangements to have their stories published. Should Frances have swallowed her pride and given reporters more material of that nature? Or was Frances right? Do public officials need to take steps to protect their personal privacy? Frances thought the Roosevelts made problems for future political leaders by throwing their lives open to public scrutiny. Does the public have the right to know these personal details?

7. Perkins’s background in social work was valuable to her, in that it kept her focused on the ultimate goal of having the laws improve people’s lives. But did this “romantic” familiarity with street-level reality sometimes lead her to focus too much on government actions that directly affected individuals and to possibly neglect more efficient policies that might have benefited individuals indirectly by improving the general business climate?

8. Would Frances Perkins be disappointed with the diminished vigor of America’s labor unions? What would she think needs to be done to reinvigorate them and permit more workers to unionize, if they wish to do so? Does the loss of much of America’s manufacturing base make it impossible for unions to gather members as they did in the past?

9. National health insurance was the one main item on Perkins’s agenda that did not get enacted. Should it be enacted now? Can it be enacted now, or are the potential demands for services too great to be undertaken?

10. If Frances Perkins had quickly deported union organizer Harry Bridges as an alleged communist, as many congressmen demanded, would she have avoided suffering an impeachment attempt? If she had cast him out, would she have been better able to maintain her role as head of the U.S. Immigration Service and saved more of the thousands of refugees fleeing oppression during World War II?

11. To what degree were Perkins’s policies shaped by her roots in New England colonial culture? Did that same cultural background shape the New Deal in general? Did some of the New Deal policies work less well than anticipated because they had to apply to a large and multicultural nation at a time when social attitudes also changed?

12. Perkins’s husband and daughter both suffered from mental illness. How well do you think she dealt with those problems? Did she sacrifice her own financial well-being too much? Or did she contribute to the problems in some way? Should she have quit her work to care for them at home, as some might suggest?

13. What was the nature of her long-term relationship with wealthy Mary Harriman Rumsey, the daughter of the railroad magnate Edward Harriman, and sister of Averell Harriman? It was certainly a close friendship, and it was also financially advantageous for Frances, but was it more than platonic?

14. What role did religion play in Frances Perkins’s life?

15. How did Frances Perkins’s extraordinary accomplishments pave the way for women in political life today, women like Hillary Rodham Clinton, Nancy Pelosi, Elizabeth Dole, Michelle Obama, Sarah Palin, and Elaine Chao? Which women in political life have had careers most similar to Frances’s? What role do prominent husbands play in women’s political advancement, even today?

Kirstin Downey is a frequent contributor to The Washington Post, where she was a staff writer from 1988 to 2008, winning press association awards for her business and economic reporting. She shared in the 2008 Pulitzer Prize awarded to the Post for its coverage of the Virginia Tech shootings, and was awarded a Nieman fellowship at Harvard University. She lives in Washington, D.C.

Catching the Wolf of Wall Street

The Fall of the House of Zeus

The Prince of Providence
Back to Top