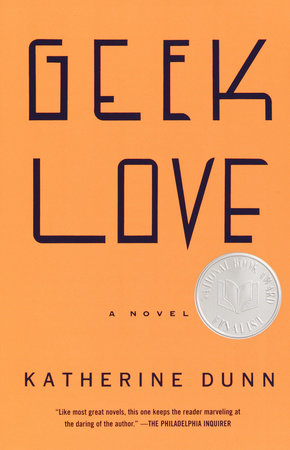 The introduction, discussion questions, suggested reading list, and author biography that follow are designed to enhance your group’s reading of Katherine Dunn’s Geek Love. We hope they will offer new ways of thinking and talking about a novel that Kirkus Reviews called an “audaciously conceived, sometimes shocking tale of love and hubris in a carnival family.”

Like many of the best American novels of the past fifty years, Geek Love tells the story of a family. But this image of family is misshapen and bizarre, a reflection cast back at us from the distorting surface of a circus mirror. In a reversal of the conventional wish to produce perfect children, Crystal Lil and Al Binewski set out to give birth to a family of freaks, taking everything from prescription and illicit drugs to insecticides and radioisotopes to engineer their children’s deformities. They want to ensure their children’s success in the carnival and, as Lil says, “What greater gift could you offer your children than an inherent ability to earn a living just by being themselves?” [p. 7] Arturo is born with flippers instead of hands and feet; Elly and Iphy are Siamese twins; Chick, who is nearly abandoned because he appeared normal at birth, can move things with his mind; and Olympia, who narrates the story, is a bald albino hunchbacked dwarf. Having created such a cast of characters, Dunn explores the strange dynamics both within the family and between the “freaks” who perform in Binewski’s Fabulon and the “norms” who come to watch them. Indeed, in one of the novel’s stunning reversals, the audience and the performers cross the boundaries that appear to separate them as Arturo convinces normal people that the way to true happiness is to “liberate” themselves from the straitjacket of their ordinariness by “shedding” their limbs. In this, and in many other instances throughout this multilayered novel, Dunn challenges the notions we use to distinguish self and other, normal and bizarre, perfection and deformity, appearance and reality.

With surprises on nearly every page, Geek Love explores the American family from an oblique and curiously revealing angle. It uncovers truths a more conventional approach could never even fathom.

1. Geek Love is preceded by an epigraph from “The Tempest,” in which the magician Prospero says of the monster Caliban: “This thing of darkness I Acknowledge mine” [“The Tempest,” 5.1.275-6]. How is this quote relevant to the novel? In what sense is Geek Love about acknowledging one’s own darkness, freakishness, or otherness?

2. Reviewers, even in praising Geek Love, have described it as “bizarre” (Chicago Tribune), “shocking” (The Atlanta Journal-Constitution), and “grisly” (The Philadelphia Inquirer). In what ways does the novel seek to shock readers? What preconceptions does it try to overturn? How does it manage to be both engaging and deeply disturbing?

3. Reading imaginative literature requires, as Samuel Coleridge said, a willing suspension of disbelief. How difficult is it to suspend disbelief and enter into the fictional world of Geek Love? What are the rewards of doing so?

4. The first chapter of Geek Love is titled “The Nuclear Family,” and the father Al is described as a “standard-issue Yankee, set on self-determination and independence” [p. 7]. In what ways are the Binewskis like a typical American family, with its ambitions and rivalries and emotional power struggles? What is Dunn suggesting by pointing out these similarities?

5. Geek Love was written in the early eighties. How does it reflect and satirize American culture at that time?

6. When Chick is born, the family is ashamed and wants to get rid of him because he appears to be normal; Olympia speaks of escaping childhood knowledge into the innocence of adulthood; and eventually people who come to Arty’s shows pay to have their limbs amputated so they can feel whole again. What is Dunn suggesting through these reversals of values? What does she accomplish by subverting our “normal” ways of perceiving these things?

7. When Oly asks Arty if the ghost stories he reads scare him, he replies, “These are written by norms to scare norms. And do you know what the monsters and demons and rancid spirits are? Us, that’s what. You and me. We are the things that come to the norms in nightmares. . . . These books teach me a lot. They don’t scare me because they’re about me” [p. 46]. In what sense is Arty right in thinking that he and his siblings are the stuff of normal people’s nightmares? What is frightening about them? Is Dunn’s book disconcerting because in some important way it’s more a reflection of ourselves than we care to admit?

8. Katherine Dunn employs many unusual words in Geek Love: skootching, skuttered, rooched, snorking, frowzled, etc. What do such words add to the flavor of the novel? In what ways is such language appropriate to the story Dunn is telling?

9. In his journal, Norval Sanderson writes, “General opinion about Arty varies, from those who see him as a profound humanitarian to those who view him as a ruthless reptile” [p. 273]. Which of these views is more accurate? Is Arty a healer or a huckster?

10. How do the twins, Iphy and Elly, Arty, Chick, and Oly relate to each other? What roles do they play? How does Arty gain control over them?

11. Why does Dunn use the story of Hopalong McGurk, Miranda, and Mary Lick, which occurs in the fictional present, to frame the main narrative of the rise and fall of the Binewski family? What does each story line contribute to the other? In what ways is Mark Lick like Arty?

12. Olympia says that Miss Lick’s purpose in arranging disfiguring operations is to “liberate women who are liable to be exploited by male hungers. These exploitable women are, in Miss Lick’s view, the pretty ones.” After they lose their beauty they can “use their talents and intelligence to become powerful” [p. 162]. Is this a valid critique of the constraints of attractiveness for women? What does the novel as a whole say about the relation between appearance and power?

13. In one of Arturo’s statements to Norval Sanderson, he says, “I get glimpses of the horror of normalcy. Each of these innocents on the street is engulfed by a terror of their own ordinariness. They would do anything to be unique” [p. 223]. Is he right? Do most people fear being ordinary?

14. Why does Oly kill Mary Lick and then herself at the end of the novel? What are her hopes for her daughter?

15. The reviewer for Kirkus wrote that the novel is about “love and hubris in a carnival family.” How does love motivate the main characters in the novel? Who is guilty of hubris? What are the consequences of this overreaching ambition?

Katherine Dunn is the author of Attic, Truck, Why Do Men Have Nipples?, and Guyana. She lives in Portland, Oregon.

Rachel Adams, Sideshow U.S.A.: Freaks and the American Cultural Imagination; Jan Bondeson, The Two-Headed Boy and Other Medical Marvels; Ricky Jay, Learned Pigs & Fireproof Women; Franz Kafka, The Metamorphosis and “A Hunger Artist”; Daniel P. Mannix, Freaks: We Who Are Not as Others and Memoirs of a Sword Swallower; William Shakespeare, “The Tempest;” Mary Shelley, Frankenstein; Darin Strauss, Chang and Eng: A Novel.
Learn More About Geek Love
print

The Dangers of Smoking in Bed

Dear Committee Members
Back to Top