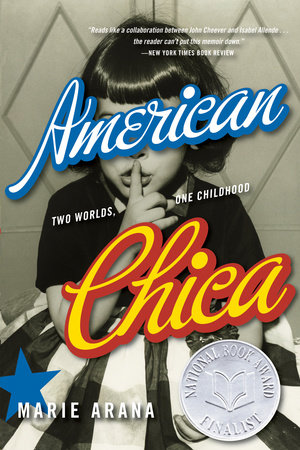 The daughter of a brilliant Peruvian engineer and a gifted American violinist, Marie Arana recalls her remarkable childhood with lyricism and unflinching candor. She tells of growing up as a child of privilege in 1950s Peru, learning the power of her invincible imagination. Though the shameful exploits of an ancestor haunt her father’s family, Arana takes pride in her Peruvian culture. Later, living in her mother’s native America, Arana is a diligent impostor among gringos, a “pretender par excellence.” Treading boldly in both worlds, she learns the seductions of invention and, ultimately, the salvation of her parents’ truth. With the passion that is surely her inheritance, Marie Arana weaves the discoveries of her bicultural heritage into a dazzling historia of stoutheartedness. This captivating memoir is at once a beautiful tale and an invitation for readers to find their own “midway crossing,” the point at which stories become love.

The questions and discussion topics that follow are intended to enhance your reading of Marie Arana’s American Chica. We hope they will enrich your experience of this dazzling, highly acclaimed memoir.

1. In the book’s opening pages, Arana describes how she carries the smell of Cartavio sugar with her from childhood. Are there sense memories that remind you vividly of your own childhood?

2. Arana says she has “puzzled over my mother’s heart for over half a century.” How does she know as a child that her mother has secrets? What is Arana’s response as a child, and then later as an adult, to her mother’s mysterious past?

3. What is the infamous “Mark of Arana,” and how does it influence Arana’s family? Describe how her family members respond to the shame incurred by Julio Cesar in the rubber-rich jungle of the Putumayo.

4. How does this shame influence Arana? Has your own identity been “forged by family denials”?

5. What kinds of cultural differences cause problems for Arana’s mother and father as they live together in Peru? How does Arana’s mother maintain her independence in her new family? Why do you think she does not take her violin with her to Peru?

6. Arana’s imagination is informed from childhood by the dioses y brujas, or gods and shamans, of Peru. She relates, “I’m haunted by an unseen dimension in which everything has roots, logic, and reasons—a tie to another point in time.” Describe how your own childhood imagination was shaped by the beliefs and traditions of your culture.

7. What important lesson does Antonio teach Arana when they are alone together? How does his guidance prepare Arana for her later understanding of power?

8. How does Arana’s home schooling by her mother in Cartavio contribute to the child’s sense of rootlessness? What is her mother’s intention in teaching her children herself? Do you admire her decision?

9. How is life different for the Arana family in Paramonga than it had been in Cartavio?

10. What does Dr. Birdseye tell Arana and George about their cultural heritage? How does this affect Arana’s feelings about herself and her family?

11. When Arana’s mother receives the news that Grandma Lo is dying, she decides the family should go to Wyoming. On that journey, how does Arana begin to view race differently in the St. Louis train station?

12. Of her Great-Grandma Clapp, Arana says, “She had been born in the age of the musket and would die in the age of the nuclear bomb.” Have three or four generations of your family crossed paths? If so, how has this affected your sense of history? Of progress?

13. In Lima, at the Roosevelt School, why does Arana pretend not to be able to read English as well as she reads Spanish? What does this say about her identity and her perception of power?

14. Arana relates that in Lima the “coin of the realm” was the knowledge that she was a member of the Peruvian upper class. How does her appetite for power arise in Lima? Describe the factors in her life that contribute to her interest in following “the Cajamarca instinct” to recover lost power.

15. In discussing her parents’ challenges, the author observes, “In the best of circumstances—in a good match between people of a single culture—merging two lives is an unruly task.” How do Arana’s parents ultimately resolve their bicultural differences to raise their children? Does their nonconformist decision prove beneficial or costly for their children?

16. Arana recounts that while studying linguistics at the British University of Hong Kong, she discovered a theory that bilingualism can be harmful. What was the nature of that theory? Are there ways in which one can feel an impostor in his or her own culture?

17. What happens to Arana’s cultural identity while she lives in the United States and sees less and less of her father?

18. What effect does Abuelita’s request in the coffee shop have on Arana’s perception of her parents’ “turbulent fusion”?

19. In the epilogue, Arana refers to her “twice-blessed soul.” Earlier, she states, “I had the palsy of a double soul.” How has she come to understand and appreciate her heritage? Has her memoir given you insights into your own cultural identity?

20. In the closing pages, Arana says, “I love to walk a bridge and feel that split second when I am neither here nor there, when I am between going and coming, when I am God’s being in transit, suspended between ground and ground.” What does this suggest to you about the permanence of identity, culture, and power? How has Arana achieved this kind of personal freedom? Are there ways you can bridge your own historias?

21. What traces of family history may have shaped the storytelling in Arana’s recent novel, Cellophane? Does the voice that carries her fiction echo her voice as a memoirist?

. . . And His Lovely Wife
Connie Schultz

The Piano Shop on the Left Bank
Thad Carhart

Having Our Say
Amy Hill Hearth, A. Elizabeth Delany and Sarah L. Delany

Laughing Without an Accent
Firoozeh Dumas

Miracle on the Hudson
The Survivors of Flight 1549, William Prochnau and Laura Parker

Riders on the Storm
John Densmore

Diana in Search of Herself
Sally Bedell Smith
Back to Top