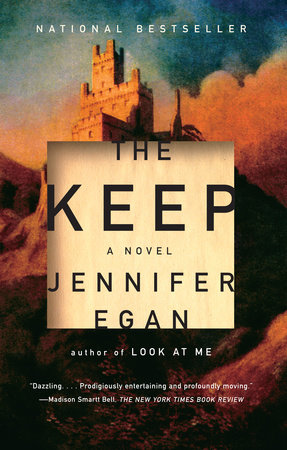 “Dazzling. . . . The Keep is a work both prodigiously entertaining and profoundly moving.”
—The New York Times Book Review

The introduction, discussion questions, suggestions for further reading, and author biography that follow are designed to enhance your group’s discussion of The Keep, a modern-day Gothic tale that is at times realistic and wryly comical, at other times surreal and dreamlike. In The Keep, Jennifer Egan again displays the dazzling powers of invention that brought Look at Me a National Book Award nomination.

In The Keep, two cousins whose lives have been haunted by an incident of childhood cruelty are reunited at a crumbling, centuries-old castle somewhere in Eastern Europe. Howard, retired from bond trading and fabulously rich at thirty-five, wants to turn the castle into an Internet-free resort where guests can rediscover their own imaginations. Danny has come because he ran into some violent trouble with his boss at a New York restaurant, and Howard has promised him a job for a while. It’s a sign of his desperate need to keep in touch with his New York life that Danny, an Internet and cell phone addict, has lugged a satellite dish with him to this remote place. In the castle’s keep, Danny meets an ancient baroness who refuses to leave even though Howard has bought the property, which has been the home of her family for centuries. In a surreal romantic interlude, the baroness tells Danny of the castle’s maze of underground tunnels and its ancient torture chamber, still fully equipped with instruments of pain.

Meanwhile, in a high-security prison, a convicted murderer named Ray has joined a writing workshop, in part to escape, however briefly, from Davis, his psychotic cell mate. His writing teacher is Holly, a woman with crimes of her own on her conscience, who comes to the prison once a week and finds herself falling in love with Ray, whose story—the story of Danny and Howard—she finds full of creative promise.

As the two stories continually merge and separate, the two narrators’ voices compete for our attention, and the line between what’s real and what’s imagined gets harder to see. The Keep is a hall of mirrors, a bravura performance of the art of fiction that is both compulsively readable and intellectually provocative.

1. What happens when you discover that Danny, in whose story we are immersed from the opening pages, is actually a character in the story being written by Ray, who is in prison [pp. 18–19]? As you proceed, does your involvement in both Danny’s story and Ray’s story remain equal, or does one plot become primary and the other secondary? How does Egan navigate the transitions between these two plots?

2. Jennifer Egan said in an interview that The Keep arose from a visit to a medieval castle. “The revelation was: This is something new to me, something different. I just want to be here for a while. I want this feeling. And for me, that sense of time and place—of atmosphere—predates a character, a story, everything else except a few abstract notions that I want to explore [The Believer, August 2000].” Consider how the setting and situation affect you in the opening chapters. What is the feeling they evoke? How does Danny’s very modern voice affect your response?

3. Guilt plays a large role in the lives of several self-destructive characters in The Keep. How does guilt for past actions shape the present lives of Danny and Holly?

4. The Gothic novel is a genre that emerged in the eighteenth century with Horace Walpole’s novel The Castle of Otranto. Gothic novels often included crumbling ruins, dark secrets, imprisoned heroines, hidden passages, and so on. Why does Ray choose to write a modern Gothic novel, and how do elements like the castle, the baroness, and the drowned twins resonate against the hyper-modernity of the information age that Danny has so reluctantly left behind?

5. What does the catalog of Danny’s scars and injuries tell us about him? Is he particularly accident prone? Does Danny’s character change over the course of the story?

6. Danny is officially disconnected from his known world when his satellite dish, laboriously carried from Manhattan, falls into the castle’s “Imagination Pool.” Why is this funny? What are some of the other comic scenes in the novel?

7. The series of questions that arises on page 158 is one of the frequent reminders that Danny’s story is being written by a novice. Ray becomes inspired to take writing seriously when Holly tells the class to notice all the locked doors and gates surrounding them. She says, “My job is to show you a door you can open. And she taps the top of her head.” Though Ray is skeptical about Holly’s “cheesy motivational speech,” he feels “something pop in [his] chest” [p. 20]. Why does Ray respond so powerfully to Holly’s suggestion, despite the fact that “it was just figurative language” [p. 20], as he says?

8. The Keep allows us to watch the process of someone becoming a writer. Ray listens to “ghost words” from his fellow convicts’ former lives, writing them down “because every one has the DNA of a whole life in it, a life where those words fit in and made sense. . . . I save up those words and later on I open up the notebook where I’m keeping the journal Holly told us all to keep and I write them down one by one. And for some reason that puts me in a good mood, like money in the bank” [p. 61]. What does this suggest about close observation, words, and meaning in daily life?

9. The Keep is filled with imagery of doors, windows, towers, tunnels, and stairways. Characters climb in, climb out, explore, are locked in, emerge into the light. Why is this imagery used so consistently, and whose imagination is creating or projecting it? Another major image is the pool: “There was the pool: round, quiet, black. The Imagination Pool” [p. 155]. How are these symbolic elements related to one another?

10. Drug use plays a significant role in the story, with Mick, Danny, Holly, Ray, and many of the prisoners all having been serious addicts or occasional users. How is drug use related to the main ideas in the novel? Can drug use be seen as a corollary to writing in the ways it alters perception and reality?

11. Howard is drawn to the castle because of “the feel of it. All this . . . history pushing up from underneath” [p. 46]. He goes on to say that in the distant past, “people were constantly seeing ghosts, having visions—they thought Christ was sitting with them at the dinner table, they thought angels and devils were flying around. . . .
Was everyone nuts in medieval times? Doubtful. But their imaginations were more active. Their inner lives were rich and weird” [p. 47]. Later he asks, “What’s real, Danny? Is reality TV real? . . . Who are you talking to on your cell phone? In the end you have no fucking idea. We’re living in a supernatural world, Danny. We’re surrounded by ghosts” [p. 137]. The baroness tells Danny, “Before my time there were eighty generations of von Ausblinkers whose blood now runs in my veins, and they built this castle and lived and fought and died in it. Now their bodies are dust—they’re part of the soil and the trees and even the air we’re breathing this very minute, and I am all of those people. They’re inside me. They are me. There is no separation between us” [p. 88]. This idea of feeling or seeing or hearing ghosts is central to The Keep. How do you interpret the meaning or meanings of “ghosts” in these and other conversations?

12. Can writing—and the imagination—be redemptive? Ray is serving time for murder; yet as he presents himself to us, it’s difficult to detect any evil in him. Is he a reliable narrator, or not? Is he a likable and even lovable character? Is Holly a reliable judge of character, and does her love for Ray influence your feelings about him?

13. Davis’s shoebox full of dust is a radio that can hear the voices of the dead; he sees this radio as having the same function as Ray’s manuscript: “All this time we’ve been doing the same thing: picking up ghosts. We’re in lockstep, brother. We’re like twins” [p. 106]. How is writing like Davis’s radio? Davis’s comment about himself and Ray as twins is also significant. What is important about this idea of twins, and how might it also include other characters in the novel? Which characters seem to be doubles or shadows of each other?

14. In their shared obsession with castles, dungeons, and the seductive powers of the imagination, are Danny and Howard both interested in reliving their pasts? Does the past return? Does Danny redeem himself for what Danny did to Howard when they were boys?

15. Can you imagine visiting a hotel such as Howard’s? Might the principles underlying the hotel actually be attractive to busy people in the world we now live in? Does Howard’s real power lie not in his money, but in his belief in
the imagination, and possibly in his ability to provoke people to change their lives? Is The Keep in part a serious critique of American culture’s obsession with superficiality and the distractions of the moment?

16. Reread pages 148–149, the paragraphs leading up to and immediately following the stabbing of Ray. What elements make this writing so powerful?

17. The Keep tells the stories of three main protagonists: Danny, Ray, and Holly. Whose story is most compelling, and why? Does the final chapter resolve or leave unsettled your understanding of the relationship between these characters? What happens to the two distinct plots—the story of Ray and the story of Danny—at the end of the novel? What happens when Holly dives into the pool in the final scene?

Jennifer Egan is the author of Look at Me, The Invisible Circus, and the story collection Emerald City. Her stories have been published in The New Yorker, Harper’s Magazine, GQ, Zoetrope, and Ploughshares, and her nonfiction appears frequently in The New York Times Magazine. She lives with her husband and sons in Brooklyn.

One Flew Over the Cuckoo’s Nest
Back to Top