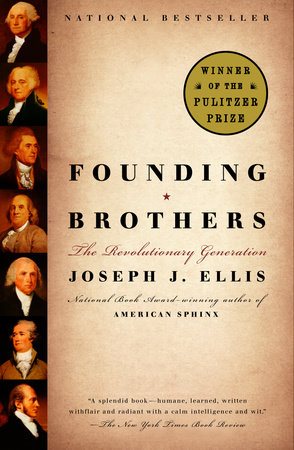 The introduction, discussion questions, suggestions for further reading, and author biography that follow are intended to enhance your reading group’s discussion of Joseph Ellis’s Founding Brothers: The Revolutionary Generation. We hope they will enrich your experience of this Pulitzer Prize-winning study of the intertwined lives of the founders of the American republic–John Adams, Aaron Burr, Benjamin Franklin, Alexander Hamilton, Thomas Jefferson, James Madison, and George Washington.

In a lively and engaging narrative, Ellis recounts the sometimes collaborative, sometimes archly antagonistic interactions between these men and shows us the private characters behind the public personas: Adams, the ever-combative iconoclast, whose closest political collaborator was his wife, Abigail; Burr, crafty, smooth, and one of the most despised public figures of his time; Hamilton, whose audacious manner and deep economic savvy masked his humble origins; Jefferson, renowned for his eloquence, but so reclusive and taciturn that he rarely spoke more than a few sentences in public; Madison, small, sickly, and incredibly shy, yet one of the most effective debaters of his generation; and the stiffly formal Washington, the ultimate realist, larger-than-life, and America’s only truly indispensable figure.

Ellis argues that the checks and balances that permitted the infant American republic to endure were not primarily legal, constitutional, or institutional, but intensely personal, rooted in the dynamic interaction of leaders with quite different visions and values. Revisiting the old-fashioned idea that character matters, Founding Brothers informs our understanding of American politics–then and now–and gives us a new perspective on the unpredictable forces that shape history.

1. The anecdote that Benjamin Rush liked to repeat about an overheard conversation between Benjamin Harrison and Elbridge Gerry on July 4, 1776, makes clear that the signers of the Declaration of Independence felt some doubt about their chances of surviving their revolutionary act. As Ellis points out, if the British commanders had been more aggressive, "The signers of the Declaration would . . . have been hunted down, tried, and executed for treason, and American history would have flowed forward in a wholly different direction" [p. 5]. Why is it so difficult to grasp this notion of the new nation’s utter fragility? How successful is Founding Brothers in taking the reader back in time, in order to witness the contingencies of a historical gamble in which "sheer chance, pure luck" [p. 5] were instrumental in determining the outcome?

2. Ellis has said, "We have no mental pictures that make the revolutionary generation fully human in ways that link up with our own time. . . . These great patriarchs have become Founding Fathers, and it is psychologically quite difficult for children to reach a realistic understanding of their parents, who always loom larger-than-life as icons we either love or hate." How does Founding Brothers address this problem, and how does it manage to humanize our image of the founders? How does the book’s title relate to this issue?

3. What was really at stake in the disagreement and duel between Aaron Burr and Alexander Hamilton? If Hamilton felt that the disparaging statements he had made about Burr were true, should he have lied in order to save his life? Was this merely a war over words? Did words have more significance then than they do now? What role did newspapers play in the drama, and how is the media’s role different or similar today?

4. In congressional debates in 1790 about the possible abolition of slavery, Georgia representative James Jackson attacked the abolitionist Quakers as "outright lunatics" [p. 97] and went on to say, "If it were a crime, as some assert but which I deny, the British nation is answerable for it, and not the present inhabitants, who now hold that species of property in question" [p. 98]. Does Jackson’s refusal to name "that species of property" point to his own moral discomfort with owning enslaved human beings? To what degree were the founders complicit in this deliberate refusal to name and acknowledge the moral problem of slavery?

5. Because of the founders’ refusal to press for abolition, the slavery question was bequeathed to Abraham Lincoln to solve–and the Civil War illustrated just how divisive the issue was. How accurate was George Washington’s belief that "slavery was a cancer on the body politic of America that could not at present be removed without killing the patient" [p. 158]? Should the nation’s leaders have pressed harder, given that "the further one got from 1776, the lower the revolutionary fires burned and the less imperative the logic of the revolutionary ideology seemed" [p. 104]? What difference might it have made in the racial currents of contemporary American life if slavery had been abolished in the early days of the nation?

6. What does Ellis mean when he says that the public figures on which he focuses in this book were "America’s first and, in many respects, its only natural aristocracy" [p. 13]? In what sense is this true?

7. How does the character of George Washington come across, as Ellis presents him and in the quoted extracts of the farewell address? How does Washington measure up to the mythology that surrounded him even in his own time? What qualities made Washington so indispensable to the new nation?

8. Ellis focuses more intensively on the plight of the slaves than that of the Indians, but he does point out that Washington addressed their situation with the suggestion that they abandon their hunter-gatherer way of life and assimilate themselves into the general population as farmers [p. 159]. Was this a viable solution, or merely a pragmatic one? What other solutions might have been offered at the time?

9. What is most surprising about Thomas Jefferson’s character, as presented by Ellis? Which aspects of his personality, or which particular actions or decisions, seem incongruous in the man who wrote the idealistic words of the Declaration of Independence?

10. What is most impressive about Abigail Adams’s intervention on her husband’s behalf in his quarrel with Thomas Jefferson? Is it possible to compare the political partnership of John and Abigail Adams with, for example, that of Hillary and Bill Clinton?

11. Ellis has said of Founding Brothers, "If there is a method to my madness in the book, it is rooted in the belief that readers prefer to get their history through stories. Each chapter is a self-contained story about a propitious moment when big things got decided. . . . In a sense, I have formed this founding generation into a kind of repertory company, then put them into dramatic scenes which, taken together, allow us to witness that historic production called the founding of the United States." Does his focus on creating separate narrative units succeed in making the complex history of the founders simpler to penetrate and understand? Are there any drawbacks to presenting history this way?

12. Ellis says that the founders were always self- conscious about how posterity would view their decisions and their behavior. For instance, Adams’s efforts on behalf of a "more realistic, nonmythologized version of the American Revolution" were partly motivated by his wounded vanity, his effort to get rid of versions of the story that "failed to provide him with a starring role in the drama" [p. 217]. How similar or different are more recent presidents’ efforts to shape the historical portrayal of their own terms in office, as with presidential libraries and such?

13. Ellis notes that his ambition with Founding Brothers was "to write a modest-sized account of a massive historical subject . . . without tripping over the dead bodies of my many scholarly predecessors." In search of a structure in which "less could be more" Ellis takes as a model Lytton Strachey’s Eminent Victorians (1918). Strachey wrote that the historian "will row out over the great ocean of material, and lower down into it, here and there, a little bucket, which will bring up to the light of day some characteristic specimen, from those far depths, to be examined with a careful curiosity" [p. ix]. How does this approach differ from other historical narratives or biographies of historical figures that you have read, and how does it affect your reading experience?

14. In the conflict between Republicans and Federalists described by Ellis throughout the book, readers can understand the origins of party factionalism that is a strong factor in American politics to this day. If, as Ellis writes, "The dominant intellectual legacy of the Revolution, enshrined in the Declaration of Indepen-dence, stigmatized all concentrated political power and even . . . depicted any energetic expression of governmental authority as an alien force that all responsible citizens ought to repudiate and, if possible, overthrow" [p. 11], what compromises were made in order to bring a stable national government to fruition? Does the apparent contradiction between Republican and Federalist principles still create instability in the American system?

15. In recent years historians have tended to avoid focusing on such issues as leadership and character, and more is being written about popular movements and working people whose lives exemplify a sort of democratic norm. Ellis clearly goes against this trend in offering Founding Brothers as "a polite argument against the scholarly grain" [p. 12]. Does he effectively convince his readers that the founding of the American nation was, in fact, largely accomplished by a handful of extraordinary individuals?

Joseph J. Ellis is the author of several books of American history, among them Passionate Sage: The Character and Legacy of John Adams and American Sphinx: The Character of Thomas Jefferson, which won the 1997 National Book Award. He was educated at the College of William and Mary and Yale University and lives in Amherst, Massachusetts, with his wife, Ellen, and three sons.

Heirs of the Founders