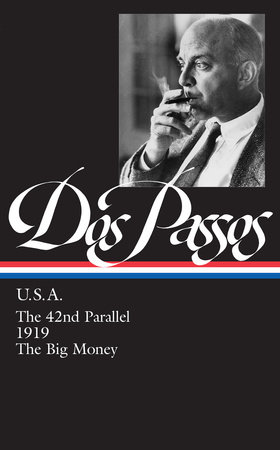 Unique among American books for its epic scope and panoramic social sweep, U.S.A. has long been acknowledged as a monument of modern fiction. Now The Library of America presents an exclusive one-volume edition of this enduring masterwork by John Dos Passos, including for the first time detailed notes and a chronicle of the world events that serve as a backdrop.

In the novels that make up the trilogy—The 42nd Parallel, 1919, and The Big Money—Dos Passos creates an unforgettable collective portrait of America, shot through with sardonic comedy and brilliant social observation. He interweaves the careers of his characters and the events of their time with a narrative verve and breathtaking technical skill that make U.S.A. among the most compulsively readable of modern classics.

The U.S.A. trilogy is filled with American speech: labor radicals and advertising executives, sailors and stenographers, interior decorators and movie stars. Their crisscrossing destinies take in wars and revolutions, desperate love affairs and harrowing family crises, corrupt public triumphs and private catastrophes, in settings that include the trenches of World War I, insurgent Mexico, Hollywood studios in the silent era, Wall Street boardrooms, and the tumultuous streets of Boston just before the execution of Sacco and Vanzetti.

The volume contains newly researched chronologies of Dos Passos’s life and of world events cited in U.S.A., notes, and an essay on textual selection. 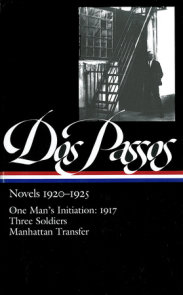 “The U.S.A. trilogy hasn’t been available in a single volume for decades. All hail, then, the estimable Library of America, which has brought out such an edition. . . . Replete with notes and chronologies of both Dos Passos’s life and of world events contemporaneous with the action of the novels, its edition of U.S.A. is one to savor.” —The Plain Dealer