The Sound and the Fury Reader’s Guide 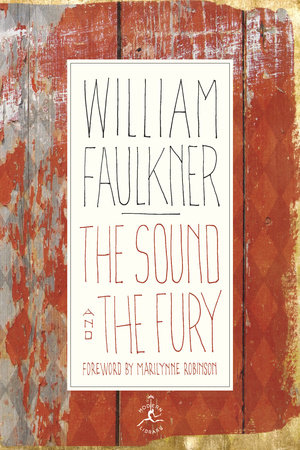 The Sound and the Fury Reader’s Guide

print
The Sound and the Fury Reader’s Guide

The questions, discussion topics, and author biography that follow are designed to enhance your group’s reading of three of William Faulkner’s greatest novels: The Sound and the Fury, As I Lay Dying, and Absalom, Absalom! We hope that they will provide you with new ways of thinking and talking about three works that stand as major landmarks in the history of modern American literature, works that exemplify Faulkner’s bold stylistic and formal innovations, his creation of unforgettably powerful voices and characters, and his brilliant insight into the psychological, economic, and social realities of life in the South in the transition from the Civil War to the modern era. In their intellectual and aesthetic richness, these novels raise nearly endless possibilities for discussion. The questions below will necessarily be limited and are meant to open several, but certainly not all, areas of inquiry for your reading group.

The Sound and the Fury, published in October of 1929, was Faulkner’s fourth novel–and clearly his first work of genius. Now considered to be one of the strongest American contributions to the fiction of high modernism, it has generated countless critical interpretations. In writing the novel, Faulkner experienced a creative absorption and passion that he was never to forget; he said of The Sound and the Fury, “It’s the book I feel tenderest towards. I couldn’t leave it alone, and I never could tell it right, though I tried hard and would like to try again, though I’d probably fail again.”

The novel tells the story, from four different perspectives, of the disintegration of a Southern family. The father is cynical and passive, and though he clearly loves his children, he drinks himself to death; the invalid mother has no love for her children and continuously demands that she herself be taken care of; Benjy, the mentally retarded son of whom his mother is ashamed, is castrated after he begins to exhibit sexual behavior; Quentin, the neurotic and romantic son, goes off to Harvard to fulfill his mother’s lifelong wish and commits suicide there; Caddy, the only daughter, becomes pregnant while still a teenager and quickly marries a man who turns her out of the house when he discovers that their child is not his; Jason, his mother’s favorite, loses his chance at a lucrative job when Caddy’s marriage fails and is reduced to supporting the family by working in a general store. Caddy’s daughter–named after her brother Quentin–is brought up in the unhappy Compson household although everyone is forbidden to speak her mother’s name. She has her revenge upon her uncle Jason when she steals the $7000 he has amassed by embezzling from his mother and from funds sent to Quentin by Caddy. The family is supported and cared for by a family of black servants, led and held together by the matriarch Dilsey.

Because of its experimental style, The Sound and the Fury presents a daunting challenge for readers. By 1929 Faulkner had given up trying to please publishers and reviewers, and, as the critic Albert J. Guerard has noted, now seemed “to write only for himself and a happy few.” Traditional aspects of the novel like exposition, plot, and character development are cast aside in the attempt to find a narrative form that could represent the realities of mental chaos, the fluidity of time and memory, and the painful interweaving of separate selves in family life. Though at times Faulkner’s material may seem so inchoate as to be barely containable within language at all, The Sound and the Fury attains heights and depths of expression that are truly breathtaking: it is an unforgettable work that richly rewards the reader’s efforts.

William Cuthbert Faulkner was born in 1897 in New Albany, Mississippi, the first of four sons of Murry and Maud Butler Falkner (he later added the “u” to the family name himself). In 1904 the family moved to the university town of Oxford, Mississippi, where Faulkner was to spend most of his life. He was named for his great-grandfather “The Old Colonel,” the family patriarch who fought in the Civil War, built a railroad, wrote a best-selling romantic novel called The White Rose of Memphis, and was eventually killed in a duel with a disgruntled business partner. Faulkner identified with this robust and energetic ancestor and often said that he inherited the “ink stain” from him.

Never a brilliant student, Faulkner left high school after the tenth grade. He tried to enlist in the U.S. Air Corps in 1918 but was rejected because of his small height and weight. He went to Canada, where he pretended to be an Englishman and joined the Canadian RAF training program, which he did not complete until after the Armistice. He returned to his hometown in uniform, however, boasting of war wounds, and briefly attended the University of Mississippi, where he began to publish his poetry. Faulkner spent brief periods of time in the literary capitals of the 1920s, Paris and New York; in New Orleans in 1925 he met Sherwood Anderson, who encouraged him to try writing fiction. His first novel, Soldiers’ Pay, was published in 1926; it was followed by Mosquitoes and Sartoris. His first undisputed masterpiece, The Sound and the Fury, came out in 1929 and was followed by another masterpiece, As I Lay Dying, in 1930.

In 1929 Faulkner married his childhood sweetheart, Estelle Oldham, after she was divorced from her first husband. They had a premature daughter, Alabama, who died ten days after birth in 1931; a second daughter, Jill, was born in 1933. With the publication of his most violent and sensational novel, Sanctuary (1931), Faulkner was invited to write scripts for MGM and Warner Brothers, which he continued to do for twenty years. Much of the dialogue in the film versions of Hemingway’s To Have and Have Not and Chandler’s The Big Sleep was written by Faulkner. Light in August (1932) was his first attempt to engage the rending racial issues of the South, an effort continued most successfully in Absalom, Absalom! (1936), and Go Down, Moses (1942). Until the appearance of Malcolm Cowley’s The Portable Faulkner in 1946, Faulkner had been seen as a regional writer; afterward critical assessments began to register the major stature of his work.

The Razor’s Edge
Back to Top