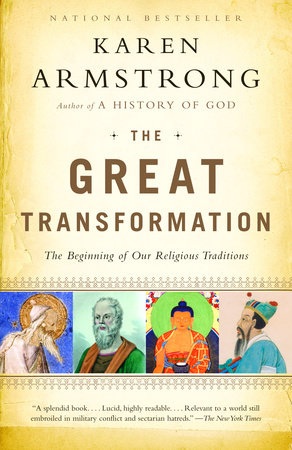 The introduction, discussion questions, suggestions for further reading, and author biography that follow are intended to enhance your group’s reading of Karen Armstrong’s The Great Transformation, a wide-ranging study of the great sages of the Axial Age and the ethical philosophies they gave to the world from the bestselling author of A History of God.

In the period from the ninth century to the second century BCE, the peoples of four distinct regions of the civilized world created the religious and philosophical traditions that have continued to nourish humanity to the present day: Confucianism and Daoism in China, Hinduism and Buddhism in India, monotheism in Israel, and philosophical rationalism in Greece. Later generations further developed these initial insights, but we have never grown beyond them. In The Great Transformation, Karen Armstrong reveals how the sages of this pivotal era—whose ideas share the values of selflessness, empathy, and respect for others—can speak clearly and helpfully to the violence and desperation that we experience in our own times and teach us to revive the spirit of compassion that is the basis of all religious traditions.

She traces the development of the Axial Age chronologically, examining the contributions of such figures as the Buddha, Socrates, Confucius, Jeremiah, Ezekiel, the mystics of the Upanishads, Mencius, and Euripides. All of the Axial Age faiths began in principled and visceral reaction against the unprecedented violence of their time. Despite some differences of emphasis, there was a remarkable consensus in their call for an abandonment of selfishness and a spirituality of compassion. With regard to dealing with fear, despair, hatred, rage, and violence, the Axial sages gave their people and give us, Armstrong says, two important pieces of advice: that first there must be personal responsibility and self-criticism, and it must be followed by practical, effective action. In her opening and concluding chapters, Armstrong urges us to consider how these spiritualities challenge the way we are religious today.

The Great Transformation revives for its readers the most wise and sensible of ancient spiritual practices—practices that hold the possibility for healing in our own troubled times.

1. At the very beginnings of the Axial Age, the Aryans of the steppes of southern Russia developed a concept of the divine: “Humans, deities, animals, plants, and the forces of nature were all manifestations of the same divine ‘spirit.’ . . . It animated, sustained, and bound them all together” [p. 4]. How is this concept of the holiness and interconnectedness of all life further developed and reinforced in the other, later religions discussed in the book?

2. Armstrong notes that the Axial religions all arose out of a revulsion against violence. Zoroaster was incensed at the murderousness of cattle raiders on the steppes [pp. 8–12], Israel’s breakthrough “followed hard upon the heels of a massacre” [p. 77], and in China, the horror of total war on civilians “intensified the quest for a new religious vision” [p. 317]. How did the thinking of the sages seek to put an end to violence? What kinds of approaches do these religions have in common?

3. “In the Middle East, holiness was a power that lay beyond the gods, like brahman. The word ilam (‘divinity’) in Mesopotamia referred to a radiant power that transcended any particular deity. . . . The gods were not the source of ilam, but like human beings, mountains, trees, and stars, they participated in this holiness” [p. 54]. How does this generalized idea of divinity contrast with the monotheism of the Israelites, which developed in the same area?

4. Like the people of most other Axial Age cultures, the Greeks felt that “it was impossible to achieve life and ecstasy unless you had experienced the depths of loss” [p. 68]. How do the examples discussed from Greek tragedy, myth, and ritual—like the Eleusinian mysteries for instance [pp. 219–221]—illustrate this belief in the necessity of suffering for the attainment of spiritual knowledge?

5. The Hebrew prophets, including Moses, Jeremiah, Amos, and Isaiah, all demonstrate the need for a spiritual leader to tell the truth to his people and to teach self-criticism. Why is self-criticism necessary in any spiritual practice?

6. Consider the idea that life is dukkha, a word that is usually translated as “suffering” but which also means “unsatisfactory, awry” [p. 230]. While this is a central concept in Buddhism, in what ways do other religions also address this problem? To what forms of suffering does dukkha refer?

7. Patanjali, who compiled the yoga sutras, “listed five vrittis (‘impulses’) that held us in thrall: ignorance, our sense of ego, passion, disgust, and the lure of this transient life. These instincts surfaced one after the other, with inexhaustible and uncontrollable energy. . . . [They] had to be annihilated, ‘burned up.’ . . . Only by sheer mental force” [p. 232]. Do these insights into human psychology seem similar to those by later thinkers like Freud and Jung? Does the impulse of the yogins to withdraw from society to pursue a spiritual quest make sense? What should we make of the fact that some paths to spiritual fulfillment are profoundly private and antisocial?

8. While the Xunzi and the Daodejing both contain descriptions of the ideal sage ruler, Armstrong notes the difficulty of reconciling Laozi’s spiritual ideas with political reality in China and elsewhere: “It is difficult to see how a sage who had reached this level of ‘emptiness’ would ever come to power, since he would be incapable of the calculation that was necessary to win office” [p. 414]. Is there a fundamental discrepancy between the ideals of Daoism—like being rooted in stillness and emptiness—and the characteristics needed for political leadership? Why does Armstrong say that Laozi’s “was an essentially utopian ideal” [p. 414]?

9. In discussing the Jewish rabbis Akiba and Hillel, Armstrong emphasizes that they did not hold “orthodox” beliefs: “Scripture was not a closed book, and revelation was not a historical event that had happened in a distant time. It was renewed every time a Jew confronted the text, opened himself to it, and applied it to his own
situation. . . . Nobody—not even the voice of God himself—could tell a Jew what to think” [p. 455]. Why is this an important idea for Armstrong? What qualities make the rabbinical approach to God both humane and civilized?

10. The concept of ahimsa (nonviolence) was put into practice most rigorously by the Jains, who believed that “the dukkha [suffering] that pervaded the entire world was caused by the actions of ignorant people, who did not realize what they were doing when they injured others” [p. 289]. Their desire to do no harm to any living thing was meant to “cultivate a tenderness and sympathy that had no bounds” [p. 290]. What do you think of the lengths to which the Jains took their desire to do no harm?

11. Might the Buddhist ideal of anatta or “no self” [p. 337] be thought of as similar to the ideal of selflessness found in the early Christian Church? Saint Paul said, “There must be no competition among you, no conceit; but everybody is to be self-effacing. Always consider the other person to be better than yourself, so that nobody thinks
of his own interests first, but everybody thinks of other people’s interests instead” [p. 458]. “Living beyond the confines of egotism” was promoted by all the Axial philosophies [p. 468]. What, then, do you think of the popular idea in Western psychological thought that developing a strong sense of self gives one the confidence to deal with life’s difficulties?

12. In her conclusion, Armstrong says that the Axial Age sages, who lived in violent times, created “a spiritual technology that utilized natural human energies to counter this aggression” [p. 466]. Discuss her belief that “the consistency with which the Axial sages—quite independently—returned to the Golden Rule may tell us something important about the structure of our nature” [p. 467]. What is she suggesting about the human religious impulse? Is it essentially about preserving life and living peacefully? Is it, in part, an instinct for survival?

13. How does the Buddhist concept of behavior that is “unskillful”—a term that Armstrong uses throughout the book—relate to our relations with others and to our intentions in everyday life?

14. While Armstrong makes clear that the Axial Age religious traditions are based on principles of compassion and self-abandonment, she has also said, “very often, people don’t want to be compassionate religious people. They prefer to be right. Rarely do they want to give up their egotism. . . . They often want religion to give them a sense of strong identity. That means they want to be the one and only believers. This short-circuits the whole of the religious experience” [Interview, Chicago Tribune, Apr. 25, 2006, p. 1]. Do you agree with her sense that many people use their religious identity to achieve a sense of self-righteousness? How often do you see or read about religion being used today as a force of conflict or violence?

15. In her conclusion, Armstrong says, “The sages were ahead of us in recognizing that sympathy cannot be confined to our own group. We have to cultivate what the Buddhists call an ‘immeasurable’ outlook that extends to the ends of the earth, without excluding a single creature from this radius of concern. . . . If I made my individual self an absolute value, human society would become impossible, so we must all learn to ‘yield’ to one another. Our challenge is to develop this insight and give it a global significance” [p. 475]. How might these ideas be put into practice, on an individual level as well as on a larger scale?

16. “Auschwitz, Bosnia, and the destruction of the World Trade Center revealed the darkness of the human heart,” Armstrong writes. “Today we are living in a tragic world where, as the Greeks knew, there can be no simple answers; the genre of tragedy demands that we learn to see things from other people’s point of view” [p. 476]. Do you agree with her that the best way of dealing with the reality of our own time is to follow Mozi in practicing “concern for everybody” [p. 475]? Discuss the ways in which this book has made you rethink your own experience of religion, or your thoughts about spiritual practice.

17. Armstrong has said, “The Axial Age sages were not interested in orthodoxy. Orthodoxy means correct teaching. They weren’t interested in theology much at all. For them, religion was not about belief or holding onto correct beliefs but about behaving in a way that changed you at a profound level” [Interview, The Atlanta Journal-Constitution, Apr. 22, 2006, p. B1]. She believes that practicing kindness and compassion can change
people in this way. Do you agree?

Karen Armstrong is the author of numerous other books on religious affairs, including A History of God, The Battle for God, Holy War, Islam, and Buddha. Her work has been translated into forty languages, and she is the author of three television documentaries. Since September 11, 2001, she has been a frequent contributor to conferences, panels, newspapers, periodicals, and other media on both sides of the Atlantic on the subject of Islam. She lives in London.

The Closing of the Western Mind

The House of Wisdom

The Battle for God

Desire of the Everlasting Hills

Rabbi Jesus
Back to Top