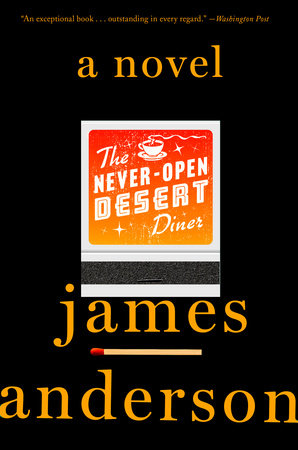 Please note: In order to provide reading groups with the most informed and thought-provoking questions possible, it is necessary to reveal important aspects of the plot of this novel—as wellas the ending. If you have not finished reading TheNever-Open Desert Diner, we respectfully suggest that you wait before reviewing this guide.

1. What are your impressions of Ben Jones? Did you like him as a character and narrator? Was he a sympathetic character?

2. The rape of Walt’s wife, Bernice, first described in Chapter 10, comes up multiple times in the novel. How do you think this traumatic event serves as a plot function?

3. While driving in Ben’s truck in Chapter 17, Josh has a very strong reaction to the cello music. Why do you think he reacted this way? Did you think he could be Claire’s husband? Is there something in your life that you see or hear that causes you to have a strong immediate response?

4. Claire plays the cello and Ben used to play the bagpipes. Do you think these instruments symbolize the two characters? In Chapter 26, Ben says that the combination of the two is “something hard for [him] to imagine.” Do you think Claire and Ben are an unlikely match?

5. The desert can be seen as a character in this book, as demonstrated in Chapter 29: “What the desert wants, in the end, it takes.” Discuss how the desert has been personified and why it is significant as a character and not just a setting in the novel.

6. When Ben imagines every possible scenario of Claire’s meeting with her husband at the beginning of chapter 32, which outcome did you think was the most likely? Do you think this was to foreshadow actual events or used as a red herring?

7. Claire’s arrival on Highway 117 marks the end of the sanctuary of the desert. All of the characters seem to be hiding from reality and trying to escape their past in the desert. Discuss how each of the characters, Ben Jones, Walt Butterfield, Preacher John, Fergus and Duncan Lacey, and Ginny react to this change in status quo. Do you think any of their lives have been changed for the better?

8. Walt is arguably the most interesting character on Highway 117. Do you think he changed or evolved throughout the novel? How do you think he will react to Claire’s death?

9. The cello is a mysterious object with a constant presence throughout the novel. Were you surprised to learn the full story behind the cello? What do you think of its final fate?

10. In the final chapter, John the preacher tells Ben that he is spending too much time alone. What do you think the future holds for Ben? Do you think he will find love again?