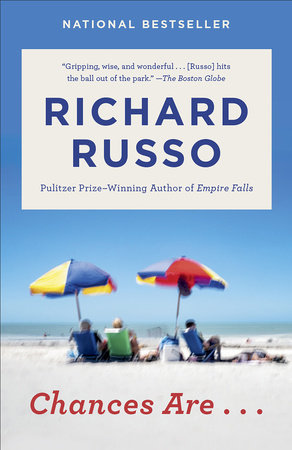 The questions and discussion topics that follow are intended to enhance your reading group’s conversation about Chances Are . . . by Richard Russo.

1. The title of the book, Chances Are. . . , echoes the Johnny Mathis song (also titled “Chances Are”) that the characters sing on their trip to Martha’s Vineyard after their college graduation. How does the song relate to the theme of chance throughout the novel?

2. Lincoln, Teddy, and Mickey all watched the Vietnam draft lottery together, and their numbers were called at different times. How does this experience affect the rest of their lives?  How much of their lives was left to chance and how much did their choices affect their outcomes in life? Did Jacy have choices in her life or was she a victim of chance?

3. All three men had vastly different relationships with their fathers, but all were greatly influenced by the men in their lives. Discuss the theme of fatherhood in the novel and the differences between these fathers. Does Russo seem to favor one father over the other? Do the characters control who they become as adults? Or are their personalities affected by their fathers?

5. Discuss the setting of Martha’s Vineyard. What does the house represent to Lincoln and the rest of the characters? What does Minerva college mean to them? How do you think the novel explores regionalism in the US—the East Coast vs. the South, etc?

6. The characters’ professor, Tom Ford, referred to himself as the “last of the generalists,” striving to learn as wide of a range of topics as possible rather than mastering one. What do you think he’s trying to achieve, and why do you think Teddy, out of the three men, was the one most attracted to this concept? Why do you think Russo included this character in the book?

7. Throughout the three men’s college years and their adult lives, Jacy is the subject of their fantasies and idolization, but later in the novel they discover that they hardly knew her as well as they thought. What did Jacy mean to these men, and what did they mean to her? What does that post-graduation weekend at Martha’s Vineyard symbolize to these men?

8. In the scene where Officer Coffin talks to Lincoln about domestic abuse, he explains how the officers used to handle the cases before he retired. Discuss the following passage. How does this relate to how society looked at female victims of abuse at large? How does this relate to Jacy’s history of sexual and physical abuse and her parents?

Coffin, pg. 204:
“Then tell me. What’s my point?”
“That we don’t do right by girls?”
The other man cocked his head, his eyes narrowing dangerously, and Lincoln could read his mind: Are you making fun of me, Lincoln? And he did his best, wordlessly, to convey that nothing could be further from the truth.
“No, Lincoln, that would be my . . . my overarching theme. My point is that when we take this jerk-off outside, it’s really him we’re trying to protect, not her. If he keeps this up, something bad is going to happen to him, and we don’t want that.

9. The novel alternates between Lincoln’s and Teddy’s points of view, but we don’t hear Mickey’s point of view until near the end of the novel. When did you notice that you hadn’t heard from Mickey yet? What did you think this meant, and how did your perspective of Mickey change after you read his chapter?

10. Mickey showed brief outbursts of violence and rage throughout the novel, including an episode in college when he randomly beat up an SAE pledge without much cause. Why do you think he punched the pledge, and where do you think this rage comes from?

11. Before Mickey runs off with Jacy, he planned on respecting his draft obligations. Discuss the following passage where Mickey imagines a conversation with his father when he is contemplating fleeing to Canada. Why do you think he changes his mind? What does it mean to him to give up his plans to report to the draft? How does this factor into his decision-making, and why does he ultimately decide to go to Canada?

Mickey, pg. 234:
This war.
It’s stupid, Dad.
They’re all stupid. That’s not the point. What is?
The point is, if you don’t go, somebody goes in your place, capisce? Look around right here, this diner. Half a dozen guys your age in here. A couple right over there in that booth. Which one should go in your place? Point him out to me, because I can’t tell.
The point is nobody should go.
Yeah, but somebody will. Some poor bastard is going.

12. Teddy’s life was dramatically affected by a spinal cord injury resulting from a basketball incident. What parts of Teddy’s life were affected by chance and which were determined by his choices? Did he have choices in his relationships with Jacy? With his boss Theresa?

13. Jacy at first chooses Teddy, but then once she discovers his impotence, she chooses Mickey. What makes her act on her romantic impulse for each man, and what attracts her to them? How would the story have turned out differently, if Teddy and Jacy would have ended up together instead? Would it have been different at all?

14. Teddy often falls victim to “spells.” What triggers these spells, and what are they? How does Teddy approach his mental health?

Learn More About Chances Are . . .
print

Redhead by the Side of the Road

The Most Fun We Ever Had

Fleishman Is in Trouble
Back to Top