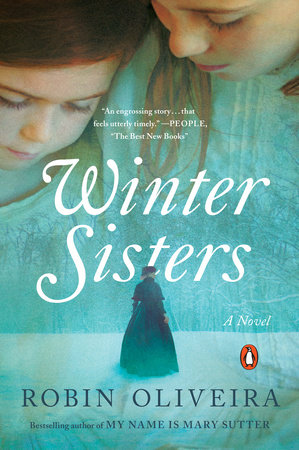 A disastrous blizzard blasts the city of Albany, New York, in 1879, and in its chaotic wake, two newly orphaned girls, Emma and Claire O’Donnell, go missing. In the following days, Dr. Mary Stipp and her husband, William, physicians and friends of the O’Donnell family, try in vain to locate the children. Initially, the police offer to search for the girls, but after six weeks of Mary’s relentless queries, they give up.

The city faces another disaster when the frozen river thaws, causing devastating floods, and when Mary and William return home from treating flood victims, Emma and Claire are waiting for them. The tale they tell is dramatic—a man has been holding them captive in a basement—but the story told by Emma’s body is all too clear to Mary. The ten-year-old has been raped. As the Sutters struggle to unravel the truth behind the girls’ trauma, a prime suspect emerges, and Albany prepares for a sensational trial. Emma, who at ten is at the legal age of sexual consent, must face down those who consider her survival as proof against her. Winter Sisters is a complex and suspenseful historical novel that is both a captivating story and a commentary on the laws that have, for far too long, oppressed and endangered women.

1. Agency, the ability to act on one’s own accord and determine one’s own life, was not something most nineteenth-century women or girls possessed. Not medically, not legally, not professionally, not in their public lives, and many not in their private lives. What degree of agency are the various women characters in Winter Sisters able to seize for themselves? To what dangers—emotional, physical, social—are they then subjected as a result? How does this theme of agency play out in Elizabeth’s subplot? In Viola’s?

2. Mary drugs Emma and Claire in order to examine them. Is this another violation of Emma and Claire’s agency or is it an act of compassion that protects them from further violation? Did Mary have a choice? What would have happened, do you think, if she hadn’t drugged them?

3. Child trafficking around the globe remains a contemporary and enormous problem. That problem is portrayed in Winter Sisters in an historical context. Does the historical lens magnify, minimize, distort, or clarify this monumental global crisis?

4. The reprehensible actions of the antagonist are portrayed in a way that leaves no doubt as to what occurred. Are the details of the crime sensationalized in any way? Did the author focus on the crime’s emotional repercussions enough? How did the novel’s realism affect you?

5. How do you feel about Harley’s escape from judgment? Do men today walk away from similar crimes unscathed?

6. The trial questions in Winter Sisters were pulled from nineteenth-century rape trial transcripts, which record the prosecutorial and defense techniques of inflicting shame, intimidation, blame, and the questioning of reputation and veracity. Does the trial in Winter Sisters seem contemporary or not? How much or little has changed around the prosecution of the crime or the way its victims are treated?

7. What psychological circumstances are at play in the story that might allow for Emma to overcome her trauma? What characters’ actions help, and which hurt her recovery? In what ways does Emma save herself?

8. Describe how the “good” men in the novel underpin, and do not overwhelm, the actions of the women in their lives. In what ways are the gender roles flipped in Winter Sisters? How pivotal is Mary’s role? Jakob’s?

9. Why do you think William, and not Amelia, took Emma to climb the cliff in Cape Cod? Was that the right decision?

The Story Behind the Book:
A Note from Robin Oliveira

Compelling and obscure historical facts spark my novels. In my first book, My Name Is Mary Sutter, a midwife longs to be a surgeon at the onset of the Civil War, an idea born of the fact that seventeen women became physicians after their experiences in the Civil War, either as nurses or volunteers. In Winter Sisters, the spark of historical fact was more disturbing.

I was poking around doing some research for another book—the book I thought I was going to write, set in Russia before the Revolution about an American woman who marries a Russian—when I ran across a piece of information that stopped me in my tracks. I hate to use a cliché, but this one applies. The fact was this: In the year 1879, in New York State and many other states in the union, the age of consent was ten years old. In Delaware, it was seven. I couldn’t believe it when I first read it. I telephoned the Albany Law School Library to ask them to hunt down the statute to verify that it was true. And it was. The Revised Statues of the state of New York 1881, Article the 2nd, section 22 reads: “Every person who shall be convicted of rape, by carnally and unlawfully knowing any female child under the age of ten years, shall be punished by imprisonment in a state prison, not less than ten years.”

It is for this reason, and many others, that this book is dedicated to women and girls everywhere.

Over the years I’ve traveled all over the country with My Name Is Mary Sutter, and many readers have asked me to bring Mary back. But I always explained that I could never think of a single circumstance that would be as challenging or as interesting as the tests she had already confronted. Becoming one of the first female surgeons? The Civil War? Battles and amputations? Difficult deliveries with difficult outcomes? It’s a little hard to follow fictionally, as it would be in life. That’s why war stories are repeated again and again. Wars tend to be turning points in people’s lives, for better or worse.

But now here was an appalling, little known, and mostly forgotten fact. The age of consent was ten years old, a law that would not change in the state of New York until the year 1886. Suddenly, the book I was going to write got the boot. Suddenly, I had a very good reason to bring Mary Sutter back. Because who else possessed the kind of intelligence and courage necessary to confront the fallout from that unbelievable statute? And voilà, a new Mary Sutter novel was born.

What followed the discovery of that fact was a years-long descent into writing a very difficult book. It involved some serious legal and historical research into the statutes of New York State, nineteenth-century criminal trials, including hunting down and reading some two hundred trial transcripts, the workings of the thriving Lumber District at the intersection of the Hudson River and the terminus of the Erie Canal in Albany, New York, the primacy of the river in dictating Albany’s commerce and its periodic flooding and freshets, the geography and statues of the Albany Rural Cemetery, Henry David Thoreau’s 1850s visit to Cape Cod, the route of the Old Colony Railroad along the cape, the history of Provincetown (then just emerging as a seat of tourism), some lovely French dolls, the prejudicial resistance faced by women physicians after the Civil War, and the societal machinations of nineteenth-century Albany.

What struck me most during my research for this book was not how different things were then, but how similar they are to what occurs now, especially when women report crime. Many are disbelieved, ignored, pacified, mocked, and some are attacked by the very people who are supposed to protect them. Though the #MeToo movement hadn’t even begun when I turned in my finished manuscript, what interested me about Winter Sisters is the same issue that has fueled that movement: For centuries men have gotten away with far too much in regard to sex trafficking, oppression of women, and abuse. No amount of backpedaling regarding “those were different times” or “values were different then” can defend the fact that girls as young as ten—ten!—were considered fair game for unwanted sexual activity, and that that abuse was both condoned and protected by law. And it still occurs today, all over the world.

I could not turn away from the story. It begged to be told. People have been turning away from the story for centuries—from a sense of powerlessness, under threat of outright coercion and retaliation, or worse, because their sensitivities are disturbed by the ugly truth. Well, what I say to that is: #TimesUp.
Learn More About Winter Sisters
print

Along the Infinite Sea

The Other Typist
Back to Top