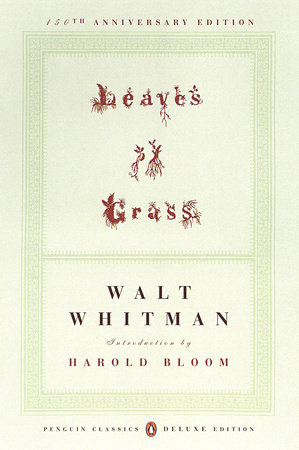 INTRODUCTION
Walt Whitman first published his collection of poems, Leaves of Grass, in 1855, and he continued to rework and expand it until his death in 1892. Since then, editors and scholars have labored over the original texts, producing numerous editions of the collection according to a variety of interpretations. Both Whitman and the editors who followed sought to bring order to the huge array of poems that Whitman added to Leaves of Grass in subsequent editions.

In the original volume of twelve untitled works, Whitman’s text sprawls across the pages, which appear to barely contain the long lines of cascading words and phrases. A calculated spontaneity characterizes the first edition, which lacks the titles and section numbers that appear in later editions. This absence of signposts seems appropriate for the predominant themes of Whitman’s poetry. The speaker directly addresses the reader with sweeping pronouncements and challenges. Images accumulate for pages at a time, suggesting a desire to encompass the entire range of human experience. The focus changes abruptly, as if something momentous has suddenly occurred to the speaker that he must communicate immediately.

Near the end of the first and longest of the book’s poems, later named “Song of Myself,” the speaker seems to refer to both the poem and himself when he says, “I too am not a bit tamed . . . . I too am untranslatable, / I sound my barbaric yawp over the roofs of the world” (ll. 1322–1323). If he himself is “untranslatable,” what are we to make of “Song of Myself” and the other poems in Leaves of Grass, which can be viewed as a kind of translation of the poet’s direct experience into language that he presumably expects the reader to understand? Furthermore, in referring to himself as “untamed” and to his poem as “a barbaric yawp,” we might ask why the speaker seems to confirm what many readers may have felt—that the poem is a wild and somewhat incoherent exclamation. One of the great challenges of reading “Song of Myself” and the other poems in the first edition of Leaves of Grass is to try to determine whether the book possesses an overall shape. Do the recurrent themes and images, as well as the separate sections of the works, move forward with a discernible purpose?

Just after “Song of Myself” begins, the speaker asks the reader a short series of questions that challenge some common assumptions about language and literature: “Have you practiced so long to learn to read? / Have you felt so proud to get at the meaning of poems?” (ll. 23–24). There is a mocking quality to the speaker’s use of the words “practiced” and “proud,” as if he intends to offer something direct and unmediated to the reader. The next lines articulate this promise: “Stop this day and night with me and you shall possess the origin of all poems, / You shall possess the good of the earth and sun . . . . there are millions of suns left, / You shall no longer take things at second or third hand . . . . nor look through the eyes of the dead . . . . nor feed on the spectres in books, / You shall not look through my eyes either, nor take things from me, / You shall listen to all sides and filter them from yourself” (ll. 25–29). Does the speaker suggest here that “Song of Myself” will perform some function that transcends the communication of meaning through words? Yet the poet himself uses words to communicate his vision to us. As we read through “Song of Myself,” with its sermonlike exhortations to see the world in a new, all-embracing way, we must ask the poet to identify the source of his authority and ask why he thinks that verbal communication can make his vision our own.

One of the most compelling aspects of “Song of Myself” is the poet’s comprehensive and even oceanic sense of the “self.” He repeatedly collapses the dualities through which we ordinarily see the world—high and low, good and evil, male and female, I and you. Further, he seems to say that both he and all people are identified in some way with each other and with all things. And yet, for all the abstractness of such an idea, the poem teems with specific descriptions of all sorts of people pursuing their various purposes, both ordinary and exceptional, across the moral spectrum. Like the growing, vibrant country in which Whitman lived, the world of his poetry is populated with individuals from all walks of life. At the same time, the speaker in “Song of Myself” subsumes these individuals to some greater idea in which individuality is dissolved.

One of the central questions that “Song of Myself” implicitly asks us to consider is how individuality can be celebrated and valued while, at the same time, a more fundamental resolution of apparent differences can inform one’s vision of the world. This question is one of the central dilemmas of a democratic republic such as the United States, and Whitman’s poetry can be viewed as profoundly political, a perspective that he himself emphasizes in his preface to the first edition. In the first lines of the preface, he speaks of America as the place where the past is assimilated into “the new life of the new forms” (p. 5). In the end, Whitman leaves us with the question he folds into perhaps the most quoted lines of “Song of Myself”: “Do I contradict myself? / Very well then . . . . I contradict myself; / I am large . . . . I contain multitudes” (ll. 1314–1316). How can the contradictions in an individual or a nation be accommodated and lead to wholeness rather than divisiveness? This question reverberates throughout Leaves of Grass and throughout much of American history. Does Whitman provide an answer?

Walt Whitman was born in West Hills, Long Island, New York, in 1819. In the early 1820s, his family moved to Brooklyn, and Whitman frequently took the ferry across the East River to visit Manhattan. When his formal education ended at the age of eleven, Whitman forged his own self-directed education by reading widely and immersing himself in the vibrant life and cultural riches of New York City. Whitman also visited his grandparents in rural Long Island often and developed an enduring love for the natural world, especially the shoreline landscape.

Whitman’s first occupation, at the age of twelve, was in the printing trade, and, throughout his life, Whitman insisted on being deeply involved in the design and layout of his books. From printing, he made an easy transition to journalism. After a fire in New York City’s printing district decimated the industry, Whitman retreated in 1836 to his family’s home on Long Island and worked as a schoolteacher. He returned to New York City in 1841, intent on making a career of writing.

Little is known about Whitman’s development as a poet prior to 1855, when he published the first edition of Leaves of Grass. Some biographers attribute his leap forward to a transforming personal experience about which we have no report or information. American essayist Ralph Waldo Emerson, one of the book’s few readers, heralded the arrival of Whitman as a remarkable, truly American poet.

Between 1855 and the outbreak of the Civil War in 1861, Whitman adopted what would become a lifelong pattern of writing and revision. In each subsequent edition of Leaves of Grass, he added new poems, retitled others, and grouped poems in clusters with suggestive headings. During these years, he immersed himself in New York City’s bohemian artistic and literary world. His experiences during this time are reflected in the groups of poems titled “Children of Adam,” celebrating heterosexual love, and “Calamus,” celebrating homosexual love. The latter group made Whitman a precursor of American gay literature.

Whitman traveled to Virginia during the Civil War to tend to his wounded brother, George. He remained in Washington, D.C., to help the wounded and dying, supporting himself with a series of bureaucratic jobs. His experiences led to a series of poems reflecting on the war and on the death of President Abraham Lincoln; Whitman later incorporated these poems, which included one of his greatest, “When Lilacs Last in the Dooryard Bloom’d,” into the larger scheme of Leaves of Grass. As he continued to revise Leaves of Grass, Whitman published several other works of poetry and prose, including Democratic Vistas (1871) and “Passage to India” (1871). From 1884 until his death in 1892, Whitman lived in Camden, New Jersey, in the only house he ever owned. He spent his final decade putting together authoritative versions of his sprawling writings, including a so-called deathbed edition of Leaves of Grass (1891).

Nine Horses
Back to Top