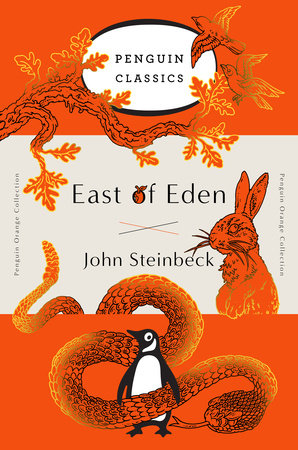 East of Eden, John Steinbeck’s passionate and exhilarating epic, re-creates the seminal stories of Genesis through the intertwined lives of two American families. The result is a purely American saga set in Steinbeck’s own childhood home, the Salinas Valley of northern California. The valley is a new world both idyllic and harsh, and Steinbeck sings to it with a personal nostalgia that is clouded by the knowledge that this valley-as all human dwellings-is the location for as much tragedy as triumph.

The first family whose story is told in this novel is the Hamiltons, led by the charismatic poet-patriarch Samuel Hamilton, an Irish immigrant who raises a large and boisterous family on a mean and unyielding plot of land through charm, ingenuity, and adaptability. The Hamiltons are penniless, but Samuel and Liza’s strong and traditional marriage yields nine children of every type and talent who brim with affection and potential. The children act out the numerous possibilities of American life, some making money in business and advertising, some seeking love and home life, others failing utterly in their struggle to find meaning and clarity in the chaotic possibility of a new century.

The second family, the Trasks, is introduced to us as a Connecticut father-a false war hero with a fortune of mysterious origin-his used-up wives, and his two sons: the murderous Charles and the sensitive, searching Adam. After a stint in the army and aimless years as a hobo, Adam falls in love and migrates to Salinas, intending to create his own Garden of Eden. There he presides over a fractured home, raising twin sons Caleb and Aron alone after the dissolution of his marriage to the unfathomable, treacherous Catherine Ames. Catherine herself-later known as Kate-represents the potential for evil in the world. Her life in the valley is the antithesis of that which the Trasks and Hamiltons seek to achieve, as she sinks into a limited life of meanness.

The Trasks are what Steinbeck called his “symbol people,” and their story reenacts the saga of Cain and Abel, for Steinbeck one of the world’s greatest stories of love, rejection, jealousy, and redemption. But Adam and his sons are held together as a family by the Chinese-American philosopher-servant Lee, who offers wisdom in the face of painful circumstances. Together the characters try to formulate personal paradises that can withstand the inevitable challenges of human existence, battling the contradiction between the desire to submit to God and tradition and the human need for self-realization and fulfillment. Much as the United States itself had to resolve its roots in Europe as it absorbed the labor of immigrants from around the world in the creation of a new nation, East of Eden‘s path-breaking Americans seek to free themselves from the chains of the past and achieve personal freedom.

A brilliant novel of ideas, East of Eden is far-reaching in its effort to explicate the most fundamental trials of mankind. Brutally realistic-and sometimes fatalistic-about people’s ability to harm themselves and those around them, it is also a celebration of perseverance, enduring love, and the noble yearning to better oneself. And it is a work of profound optimism about the capacity of humans to triumph over adversity and determine their own fates. In prose both evanescent and dignified, Steinbeck creates in these characters and for the reader “a new love for that glittering instrument, the human soul. It is a lovely and unique thing in the universe. It is always attacked and never destroyed.”

No writer is more quintessentially American than John Steinbeck. Born in 1902 in Salinas, California, Steinbeck attended Stanford University before working at a series of mostly blue-collar jobs and embarking on his literary career. Profoundly committed to social progress, he used his writing to raise issues of labor exploitation and the plight of the common man, penning some of the greatest American novels of the twentieth century and winning such prestigious awards as the Pulitzer Prize and the National Book Award. He received the Nobel Prize in 1962, “for his realistic and imaginative writings, combining as they do sympathetic humor and keen social perception.” Today, more than thirty years after his death, he remains one of America’s greatest writers and cultural figures. East of Eden, the novel he called “the big one,” was published in 1952.

The Pillars of the Earth

Of Mice and Men
Back to Top