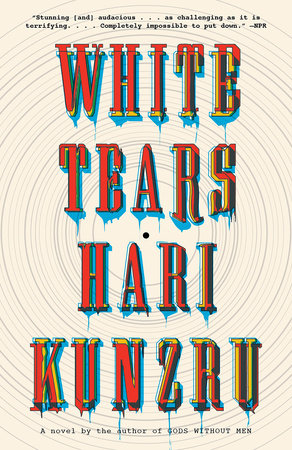 The questions, discussion topics, and reading list that follow are intended to enhance your reading group’s conversation about White Tears, Hari Kunzru’s dark and powerful novel about two young men whose lives are forever changed by the discovery of a forgotten blues record.

1. In the first chapter of White Tears, Seth describes listening to a field recording, saying he felt “I was slipping, that if I wasn’t careful I’d lose my grip on the present and find myself back there, seventy or eighty years in the past” (page 3). How do the temporal shifts in the novel often blur the lines of reality or destabilize the narrative? How are Seth’s experiences with blues records—in particular, listening to Charlie Shaw—otherworldly?

2. When Seth meets Carter, he is “in awe of” him (page 8). Did you find Carter magnetic? How does Seth’s personality change as a result of their friendship? Does Carter’s relative ease in navigating the world embolden Seth to become more confident?

3. On page 18, Seth states, “We really did feel that our love of the music bought us something, some right to blackness, but by the time we got to New York, we’d learned not to talk about it.” What do you think this “right to blackness” means? How does it mirror Chester Bly’s attitude? Do you think anyone can claim a “right” to a heritage that is not his own?

4. On page 22, Seth states, “There is a place I sometimes go to where no value attaches to anything. The world is flat. One sensation is exactly equal to the next.” At what points in the novel do we see Seth retreat into this attitude? What are the consequences of his doing so?

5. Carter describes himself as “disinherited” from his family, but Seth and his trip to the Wallace summer home reveal the situation is not that simple. How would you describe Carter’s relationship with Cornelius? Leonie?

6. Discuss Seth’s first impression of Leonie. How does his understanding of her change over time? Do you think that Leonie ever possesses any romantic feelings towards Seth? Is theirs a love story, or not?

7. The character introduced as “JumpJim” acts as a narrative bridge between the present and the past. How does Kunzru use JumpJim to provide context for the record’s history?

8. The character introduced as “JumpJim” acts as a narrative bridge between the present and the past. How does Kunzru use JumpJim to provide context for the record’s history?

9. How is systemic racism addressed over the course of the novel? What does Kunzru’s use of temporal shifts assert about the existence of racism in this country today?

10. Discuss the dual plotlines of the road trips taken by Chester Bly/JumpJim and Seth/Leonie. How do both groups navigate their time in the South? When is their privilege most apparent? How does each trip explore the fraught history of race relations in the American South?

12. Discuss the scene in which Chester and JumpJim are pulled over by the police outside Clarksdale. How does Chester’s ease in disparaging African Americans affect his road trip partner? How does this relate to the larger cultural conversation currently happening in the United States about race, privilege, and police relations?

13. What did you make of Charlie Shaw appearing in the flesh to Seth? What is the purpose of him revealing himself now? Do you attribute this to Seth’s instability? Why or why not?

14. Leonie’s murder—and the police interrogation that comes along with it—is a shocking turn of events. Discuss the scene in which the questioning of the suspect occurs. How does Kunzru play with reality and narrative structure in this scene?

15. White Tears is a deeply complex examination of race, identity, and history in America that is as technically intricate as it is topical. What was the most challenging aspect of this reading experience for you? The most thought-provoking scene? What do you think of classifying White Tears as a “ghost story”?

16. Robert Johnson is considered to be the king of the Delta blues and has become a mythic figure—most notably for the story that he sold his soul to the devil for musical prowess. In recent years, interest in Johnson has soared. How would you account for that? How does Johnson’s story and mythic status illustrate the ideas presented in White Tears?

Your Face in Mine
Jess Row

Pym: A Novel
Mat Johnson
Back to Top