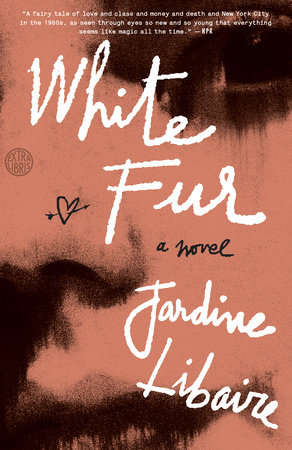 In order to provide reading groups with the most informed and thought-provoking questions possible, it is necessaryto reveal certain aspects of the story in this novel. If you have not finished reading White Fur , we respectfully suggest that you do so before reviewing this guide.

1. What kind of impressions did Elise and Jamey first make on you? In your opinion, why did she go over to his and Matt’s house that first time, and then threaten them? What’s her agenda? What’s Jamey’s?

2. How did your perception of Elise and Jamey as individuals change throughout the story, if it did change at all? How about their relationship—how did their bond change from the beginning of the book to its end?

3. Jamey’s mom Tory treats Elise like she’s nothing. What’s that about? Does your idea of what drives Tory to hate Elise change at all during the course of the story?

4. Is it plausible that someone like Elise could really connect with someone like Jamey, or is this a fairy tale? Does their different life experiences matter? If not, what does matter? If those discrepancies do kill the deal, why is that stuff so important?

5. New York in the mid-80s is a chaotic, multi-layered setting in White Fur. Did you feel like you were in it, or did it feel unreal, and why? Are these characters a product of this time and place, or could they exist now?

6. Elise is at times a bewildering character—she seems ambitious in getting out of her hometown, and determined to be with Jamey, but what else is she looking for, if anything? How did her upbringing affect who she is, and how does she seem to be different from other kids she grew up with?

7. “The secret to life is there is no secret to life” is something that Jamey seems to realize when he’s in the hospital. What does this mean to him? Is this him gaining enlightenment, or being somewhat crazy?

9. Jamey has moments where his mind slips or disobeys him; is this mental illness? Spiritual illness? What’s going on with him in the beginning, when ideas are “fermenting” in him? What happens to him in Trump Tower, and was it inevitable, or could this have been avoided?

10. Elise and her mother Denise have a complex relationship. Does Denise really want her daughter to leave home, or does she want her to stay? Why can’t or won’t Denise leave her own patterns of self-defeat?

11. Bats and Binkie are larger than life characters—what do they really see in Jamey, and want from him? Are they ludicrous villains, or plausible grandparents? Why is Elise so threatening to them—is it just about the money?

12. In the community where Elise grew up, life was easier if a person claimed one race or another for identity, and Elise refused to do that. How much is race a part of her backstory? How much is it a part of Jamey’s?

13. Elise is threatening to many people in Jamey’s inner circle—why? Is it due to her belonging to a different “social class”? How does a hierarchy of classes figure into Jamey and Elise’s lives?

14. The sex scenes are unapologetically written, vivid, sometimes using lyrical language, sometimes using “vulgar” language. Is the sex just sex, or does it illuminate spiritual or moral or emotional dimensions to the story, or to the relationship between Jamey and Elise?

15. Why does a significant piece of this story happen in Wyoming of all places? And why do they head for India? Is the very end of the book self-destructive, symbolic, hopeful, naïve, or noble? What could the next stage of their lives include, and do they have any chance of making it together?

16. Is this a true love story? Did you root for Elise and Jamey, or root against them? Do they make you believe in love or did you lose faith, or did you land somewhere in between?  If you do think it’s a love story, does that mean love conquers all?

Orchid and the Wasp

How to Be Good

The Luster of Lost Things

This Too Shall Pass
Back to Top