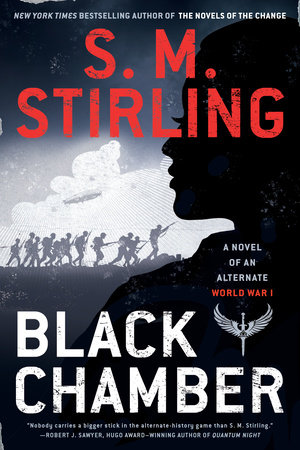 A Reader’s Guide for Black Chamber:

1. While Theodore Roosevelt isn’t a major character in the book, the differences in his career from those in our history are very important to all the major characters. How does his returning to the presidency in 1912 affect their lives? Where would they be without him?

2. In alternate 1916, Luz O’Malley Aróstegui considers herself modern and progressive. How does her conception of this differ from the assumptions we would make about these words today? How is it similar?

3. Luz regards the German intelligence agent Horst von Dückler as both an enemy and a colleague in the same line of work. She doesn’t feel any personal animosity toward him, because he’s working for his country. How does this attitude reflect on her and her world? Does it make her humane, or ruthless?

4. In the Black Chamber world, blacks in America would probably get the vote restored to them much earlier, in the 1910s rather than the 1950s and 1960s. Not because of a civil rights movement, but because the quasi-authoritarian Progressive Republican Party imposes it on the South for its own reasons. Likewise, there is an Equal Rights Amendment for women in 1913 that is closely identified with the Party’s takeover of the US. What are the positive and negative implications of these events?

5. Luz meets Ciara Whelan in Germany. Both women became secret agents because of the violent deaths of family members: for Luz her parents, and for Ciara her brother and, indirectly, her father. What does this give them in common? Unlike Luz, Ciara draws back from her pursuit of revenge. How does this make them different?

6. Ciara is a woman with strong technical interests and talents in an era when this was very much frowned on. How does the fact that Luz admires and praises her abilities affect their relationship?

7. Both Ciara and Luz are of Irish-American background. Does it give them common ground? Why or why not?

8. Luz and Professor von Bülow discuss Nietzsche’s philosophy in relation to women and exchange personal recollections, developing a degree of mutual respect. Luz reflects that if von Bülow weren’t a mad fanatic plotting a horrible crime, he’d be a nice enough old duffer. What does this attitude say about the distinction between the personal and political aspects of a human being, and Luz’s attitude toward those distinctions?

9. When Luz returns to the US and the Black Chamber station in Boston, she’s treated by the officer in charge as a “hysterical female.” What do you think of the way she deals with that?

10. As a spy and secret agent from a wealthy, cosmopolitan background, Luz is much more experienced at analyzing and manipulating human emotions than Ciara. What does this mean for their relationship? Additionally, what does it mean that Luz waits until Ciara has an independent position before inviting her to come and live with her?

Armistice
Back to Top