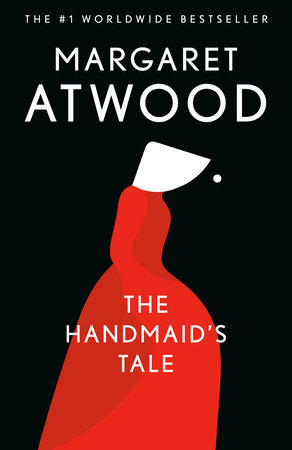 The introduction, author biography, and discussion questions that follow are designed to enhance your group’s discussion of The Handmaid’s Tale, Margaret Atwood’s seminal work of speculative fiction.

“Read it while it’s still allowed,” warns the Houston Chronicle in a review of The Handmaid’s Tale, Margaret Atwood’s #1 New York Times bestseller and seminal work of speculative fiction. Since its publication in 1986, this alternately funny and horrifying novel has haunted readers with a vision of the future that feels far too close for comfort.

Set in Cambridge, Massachusetts, The Handmaid’s Tale presents a totalitarian theocracy that has forced a certain class of fertile women to produce babies for elite barren couples. These “handmaids,” who are denied all rights and are severely beaten if they are uncooperative, are reduced to state property. Through the voice of Offred, a handmaid who mingles memories of her life before the revolution with her rebellious activities under the new regime, Atwood imagines a terrifying future based on precedents drawn from history.

Now a modern classic, The Handmaid’s Tale sits along with 1984 and Brave New World on shelves of concerned and curious readers around the world.

1. Atwood says that her novel’s title was meant to evoke both Chaucer’s Canterbury Tales and folktales or fairy tales. Why might she have wanted readers to make those connections?

2. The novel’s first epigraph, from Genesis, reveals the Biblical precedent that Gilead’s founders use to justify exploiting Handmaids. Given their apparent allegiance to the Bible, why do Gilead’s rulers keep it under lock and key?

3. The novel’s second epigraph is from Jonathan Swift’s famously satirical “Modest Proposal,” in which he suggests solving the Irish famine by having the starving peasants sell their children as food for the rich. Beyond signaling her satiric intent, do you think Atwood meant to suggest any deeper connections between Swift’s vision and hers? Does humor have any role in her satire?

4. The third epigraph is a Sufi proverb: “In the desert there is no sign that says, Thou shalt not eat stones.” What do you think this means in the context of this story?

5. Offred’s name vividly represents the erasure of her former identity and of her independent selfhood. Readers have found other evocative echoes in it: “offered,” “afraid,” “off-read.” Do these associations deepen your sense of her character?

6. Why do you think the Aunts participate so enthusiastically in the oppression of their fellow women? Are their motives different from those of the Commanders’ Wives?

7. Serena Joy was instrumental in bringing about the new social order, which now severely limits her role. Does she seem to feel that the trade-offs she has made were worth it?

8. Atwood was concerned that readers might find Gilead’s horrors implausible, so she only included events that had actually occurred at some point in history. She lists examples in her introduction; can you think of more? Does knowing this make it seem more likely that something like Gilead could happen here?

9. In her introduction, Atwood argues that her novel is not “anti-religion,” but only “against the use of religion as a front for tyranny.” Is her argument persuasive to you? Is it as relevant now as when she wrote the novel?

10. Do you think the growing popularity of dystopian novels in recent years reflects increased pessimism about the future? Atwood has denied that The Handmaid’s Tale was meant as a prediction, explaining her intention as “anti-prediction,” meaning that “if this future can be described in detail, perhaps it won’t happen.” Do you think that might be (as she also suggests) wishful thinking?

Margaret Atwood, whose work has been published in thirty-five countries, is the author of more than forty books of fiction, poetry, and critical essays. In addition to The Handmaid’s Tale, her novels include Cat’s Eye, short-listed for the 1989 Booker Prize; Alias Grace, which won the Giller Prize in Canada and the Premio Mondello in Italy; The Blind Assassin, winner of the 2000 Booker Prize; Oryx and Crake, short-listed for the 2003 Man Booker Prize; The Year of the Flood; MaddAddam; and her most recent, The Heart Goes Last. She is the recipient of the Los Angeles Times Innovator’s Award, and lives in Toronto with the writer Graeme Gibson.
Learn More About The Handmaid’s Tale (Movie Tie-in)
print

The Sound and the Fury
William Faulkner

Weather
Jenny Offill
Back to Top