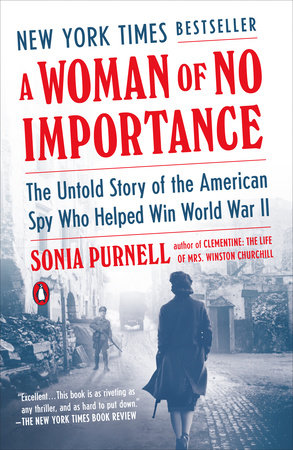 print
A Woman of No Importance Reader’s Guide

1. A charismatic woman of great intelligence and resourcefulness, Virginia Hall is an inspiration from the very first page of A Woman of No Importance. She clearly had a similar magnetic pull in person, drawing people from all walks of life to stand for freedom, their country, and the Allied effort, often at great peril to their families and themselves.

Did the book change your ideas about what one person can accomplish? In what ways did her grit and courage inspire you?

2. Since birth, Virginia was expected to marry well and become a society wife; instead, she chose a male-dominated career path in which she constantly found herself either underestimated or overlooked, even after the end of her illustrious war career. Do you feel like views on where “a woman’s place” is have changed? In what ways do you feel society has progressed when it comes to gender equality—and in what ways has it not?

3. Did you (or anyone you know) have a course set for you since childhood that you were expected to follow? Have you (or they) since rebelled from that course? If so, what obstacles did you (or they) have to face, if any? Was it worth it?

4. Considering how central Virginia’s role was in the Allied victory in France, it’s difficult to fathom how she could have been lost in the annals of history. While there are likely many factors in play as to why her story took so many years to surface, Virginia herself was also uninterested in fame and shied away from public accolades, seeking to continue her work in anonymity.

How did her decision to do so make you feel? What do you think this choice has meant, if anything, for the women who have wanted a career like hers?

5. What do you think the role of trailblazers in history should be? Do figures like Virginia have an obligation or duty toward those who come after them? What do we owe the generation that comes after us?

6. At the young age of twenty-seven, Virginia lost a leg to gangrene after a devastating hunting accident. She somehow found the resilience to not only survive but thrive, both for herself and for her beloved France. She mentions that she had a spiritual experience on her sickbed, seeing a vision of her father that told her she must survive, she must go on.

How do you feel this experience shaped the rest of her life and her adventures? What drives you to keep going in the face of hardships, great and small?

7. Sonia Purnell asks a pressing question: “One of my great interests is motivation—why did Virginia take insane gambles with her own life for the sake of another country?”

Why do you think she did? Would you do the same in her place?

8. During the war, Virginia was often a rebellious figure, known not only for her courage but often for her disregard of directives, accurately believing herself capable of playing a larger role than she was given. Still, in her personal life, rather than cause a possible family upset, she hid her continuing relationship with Paul from her mother for many years.

What did you think of her decision to do so? What does it tell us about the Virginia hidden behind all her many disguises and bravery?

9. Virginia was wise, discerning, and perceptive beyond belief—her life depended on deciding whom to trust and how much. Against all odds, it seems she always made the right choice—except for Alesch. Given the skepticism that others around her had about him, why do you think she trusted him as she did?

10. Virginia had to put on many personas during the war, from the journalist she played during her first foray into France to the elderly peasant woman she pretended to be when she returned. She played all her roles with finesse and, apparently, very convincingly.

Do you think her ability to commit to character was innate or a carefully acquired skill? What do you think are the key characteristics of a spy?

11. Virginia and her compatriots all across France faced heavy losses during the war. Some were tortured to the point of death, others faced the firing squad, and still others suffered from injuries incurred in battle for the rest of their lives—including Virginia herself.

Were these sacrifices worth it? What did Virginia’s life teach you about the importance of fighting for your beliefs? And against tyranny? Do you have a cause that you would be willing to die for?

12. If Virginia were alive and in her prime today, what do you suppose her role would be in today’s America? What would she think of America now?

13. Virginia Hall was a very private person, whether because she had noted what happened when her fellow spies had loose lips or because of her nature. If you could meet Virginia, what is the foremost question you’d want to ask her?

Learn More About A Woman of No Importance
print

Midnight in the Garden of Good and Evil
John Berendt