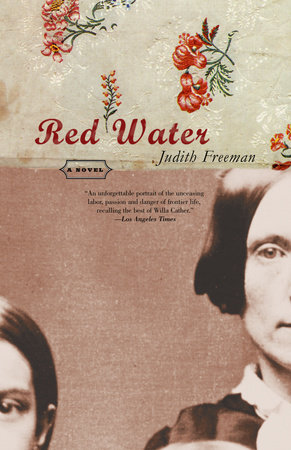 “An unforgettable portrait of the unceasing labor, passion and danger of frontier life, recalling the best of Willa Cather.” —Los Angeles Times

The introduction, discussion questions, author biography, and suggested reading list that follow are designed to enhance your group’s reading of Judith Freeman’s Red Water, a fully imagined historical novel that explores the mysteries surrounding early Mormon settlers in the west and one of the darkest chapters in their history, the Mountain Meadows Massacre.

Set in the harsh high-desert landscape of Utah in the 1870s, Red Water tells the story of John D. Lee, a Mormon elder and frontiersman, a man who wed nineteen women and was involved in the killing of more than one hundred men, women, and children on their way to California. Telling this story from the perspectives of three of Lee’s wives, Emma, Ann, and Rachel, Judith Freeman probes the ambiguities surrounding Lee. Is he “a saintly devil, a monster cloaked in righteous attire” [p. 84], as his critics claim, or is he, as Ann says, “a man of many talents—a trader and a salesman, a farmer and factory man, a miller and a healer, a leader and interpreter, a ferryman and a builder of houses and of the Kingdom of God” [p. 313]? That question lies at the heart of Red Water, the focal point around which the story turns. But the novel explores much more than whether or not Lee led the massacre of innocents at Mountain Meadows. Freeman succeeds brilliantly in getting inside the psyches of the women who live with, and sometimes love, John D. Lee. As they describe their relationships with Lee they also tell their own stories, stories of passion and loneliness, of submission and the assertion of their own powers, of life at what seemed the end of the earth. It is this vivid recreation of the Mormon frontier world, and the inner worlds of the women who were brought there, that makes Red Water so powerful.

With pointed relevance to many of the religious controversies in the world today, Red Water is both a brilliant historical novel and a cautionary tale for our time.

1) Why does Judith Freeman title her novel Red Water? What significance does the color red acquire as the novel progresses? What role does the harsh Utah landscape itself play in the story?

2) Why does Freeman choose to tell the story of Red Water through three different points of view? In what ways are Emma, Ann, and Rachel different from each other? What does this multiple perspective add to the novel?

3) Emma says that she is “well aware that, to the uninitiated, to those who live outside the realm of our kingdom, our lives must appear unfathomable, or like a labyrinth, especially with regard to our marriage customs” [p. 55]. Is she right about this? How difficult is it to understand nineteenth-century Mormon polygamy? Does the novel succeed in making these customs more comprehensible to non-Mormon readers?

4) Why does Emma fall in love with John D. Lee? In what ways is their love both physical and spiritual? Why does Lee ask Emma to call him “Father”?

5) In describing John D. Lee’s relationship with his many wives, Emma says that “his authority was absolute, and yet in truth, over time I came to see how little control he had over his wives. Just as he couldn’t control the winds that reduced his cornfields to tatters or the rains that washed out his dams. We, too, were our own force of nature, and we required careful tending in order not to overleap our banks” [p. 65]. How do Emma, Ann, and Lee’s other wives assert their independence?

6) Ann says of John D. Lee: “He was the sort of man for whom no middle feeling existed. People either thought him generous and friendly and kindhearted, or shifty and power-hungry and dishonest” [p. 238]. Why does Lee arouse such disparate reactions?

7) Red Water is a historical novel, describing events that occurred over a century ago. How is this story of Mormons in the west, of their social and personal relations and of a massacre their leaders may or may not have planned, relevant to world events today? Are the Mormons in the novel guilty, as Ann claims, of committing horrible crimes “for the sake of . . . fanatical beliefs” [p. 317]?

8) At the heart of Red Water is a persistent and troubling question that is never fully answered: Was John D. Lee made a scapegoat for the massacre at the Meadows, and if so by whom? Was he responsible for some of the killings that day?

9) Why do the Mormons want to convert the Indians? What does Brigham Young imagine will become of the Indians one day? What does this belief suggest about how the Mormons interpreted the relationship between race and religion?

10) Red Water offers little in the way of a conventional plot to pull the reader along. What other means does Freeman use to arouse and sustain her reader’s interest?

11) Of the three wives given the fullest treatment in the novel, Rachel is the most devoutly religious. What do her journal entries reveal about the nature of her faith? How is she different from both Emma and Ann? In what ways does she represent both the strengths and the weaknesses of her religion? Is she, as she claims, Lee’s “one true wife” [p. 313]?

12) Near the end of the novel, as Rachel worries about Navajo raids, she thinks, “We are in the hands of the Lord and all things are promised to work together for the good of those who love and fear God, though why this did not save my husband’s life, I do not know” [p. 279]. What does her thinking here suggest about the problems of trusting in God’s will? What does the novel as a whole seem to suggest about the notion of God’s control of, and intervention in, human affairs?

13) What kind of man, finally, is John D. Lee? What are his good qualities? What are his flaws? What motivates his behavior—personal ambition and lust for both sex and power, or a driving spiritual vision and deep compassion for others? Does the novel decide these questions or leave them up to the reader?

14) Is it possible to tell what Freeman’s attitude is toward Lee, and the Mormons generally, as they are represented in the novel? To what extent should the novelist reveal or conceal her own moral or political stance in the telling the story? Should she simply tell the story, or should she subtly guide her readers?

15) What large questions does the novel raise about the relationship between religious freedom and federal law, personal conscience and social conventions, true faith and spiritual hypocrisy? Are the Mormons, and other groups like them both in America and abroad, persecuted religious minorities or dangerous fanatics?

Judith Freeman is the author of three previous novels—The Chinchilla Farm, Set for Life, and A Desert of Pure Feeling—and of Family Attractions, a collection of stories. She lives in California and Idaho with her husband, the photographer Anthony Hernandez.

Belle Cora
Back to Top