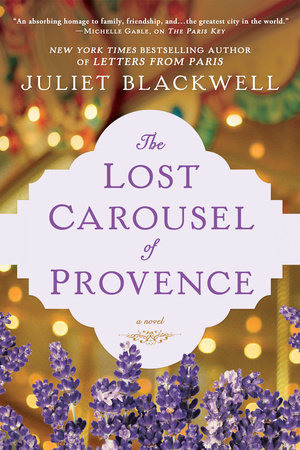 The Lost Carousel of Provence
Juliet Blackwell
Questions for Discussion

1. Imagine you have just arrived in a foreign city (Paris, Rome, Moscow, Beijing—you name it!) where you do not speak the language, or have memorized only a few words or phrases. How would you cope? Do you think being a cultural and linguistic “outsider” would give you unique insights?

2. How do you interpret the novel’s epigraph by Pablo Neruda, which reads: “My soul is an empty carousel at sunset”?

3. Do you have any childhood memories of riding on carousels? What is the first thing you remember about it?

4. Why do you think so many people feel a sense of profound nostalgia when thinking about carousels?

5. Originally built to train warriors to fight, carousels later became a festive recreation for adults, and we now associate them with the innocence of children. What do you think these changing functions reveal about how society has changed over time?

6. Cady’s personality was profoundly affected by her lack of important human connections as a child. Do you think her uniqueness works as a strength or a weakness for her?

7. Would you characterize Maxine as a mother figure for Cady? Or as a loving friend? Do you feel there’s a difference between maternal love and the love of a friend?

8. What role does Olivia play in Cady’s life? Was Olivia right to try to talk Cady into doing something because Olivia thought it was in Cady’s best interests? Is it ever acceptable to push someone we care about to do something they are hesitant to do?

9. Cady mentions that photographing carousels brings her a kind of “painful joy.” What do you think she meant by that? Is it a feeling that you’ve experienced in your own life?

11. Have you ever toured a scary—or just run-down—old mansion? What was it that made the greatest impression on you? If you could live in a large old house like Fabrice’s, would you? Why or why not?

12. Cady feels as though she “fits” better in France than in the United States. Have you ever wound up someplace new or foreign where you felt more at ease, more “yourself”?

13. How does Cady’s lack of family history tie into her search for Gus-the-rabbit’s provenance?

14. William Tammeus wrote: “You don’t really understand human nature unless you know why a child on a merry-go-round will wave at his parents every time around and why his parents will always wave back.” What do you think this suggests about the meaning of being a child? Or of being a parent?

15. Fabrice feels a lifelong sense of guilt for something he did as a brave but unthinking teenager. His circumstances were extreme, but have you ever done something similar? (Or maybe you still do!) Is rushing into something, feeling as if one is in a play and not understanding the possible repercussions, something to be restricted to childhood, or does it have a place in the adult world as well?

16. Jean-Paul is at a turning point in his own life. Do you think he is more open to helping Cady because of that? Are there times in your life when you’ve been more or less open to allowing someone new—and rather unorthodox—into your life? Is that a positive, or a negative, mind-set?

17. Is Jean-Paul wise to consider selling Château Clement to a hotel chain, or should he indulge in the dream of trying to update the mansion and run a small hotel himself? What do you think he will choose to do with his inheritance? What would you like him to do?

18. Maëlle makes a series of life choices—as you read, did you characterize her choices as brave or as foolish? As selfless or as selfish? Given her circumstances and the time in which she was living, were other options available to her? What do you think gave her the courage to do what she did?

19. Maëlle feels as though she is happiest—and most truly herself—when she is able to coax a form out of a chunk of wood. Have you ever felt that way about a work or craft, or anything that you create? Is it important for everyone to have this kind of passion in life?

20. There are many historical precedents to this story, but do you feel it is far-fetched to think two women, Josephine and Maëlle, would hatch the plan they did and carry it out? Under what circumstances is it acceptable to engage in an act of deception of this magnitude? Did the good they accomplish justify the deceit?

21. What is the significance of Cady’s riding the carousel at the end of the book?
Learn More About The Lost Carousel of Provence
print

Ellie and the Harpmaker

All the Beautiful Girls

The Song of Hartgrove Hall
Back to Top