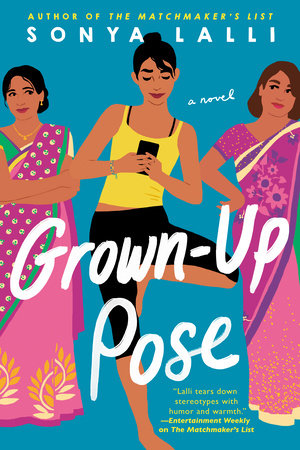 1. As much as Anu loves Neil, she chooses to separate from him rather than try to keep working on their marriage. What reasons led her to make this decision? Do you think she resented him, or resented the traditional roles each of them had taken on in the marriage?

2. Anu often uses labels such as “good Indian girl” or “good wife and mother”—and she feels the weight of the expectations that go along with those characterizations. Do you think such labels are ever black and white? How much did you think the burden Anu was feeling came from expectations she placed on herself?

3. Anu and Jenny lament over the fact that their alumni magazine, and society in general, tends to celebrate milestones such as marriage and children, and fails to give recognition to personal accomplishments. Do you agree with their viewpoint? In what ways does Anu’s viewpoint influence her decisions?

4. Initially, Anu believes she is more grown up than her best friends because she is, among other things, a mother and wife, although she ultimately comes to realize she’s wrong. What do you think it means to be “a grown-up” in today’s society? Is there a difference between acting like a grown-up and truly being grown up?

5. Comparing her own family to Monica’s and Priya’s friend Auntie Jayani, Anu talks about how there is a spectrum of Indian families in terms of how traditional they are. Do you see this kind of spectrum in your own community? How do you think social mores change over time?

6. Do you think Anu’s decision to take over Mags’s studio was impulsive? Irresponsible? Are there ways in which following her dream to run a yoga helped Anu grow as a person?

7. Anu partially justifies her decision to leave for London by telling Monica that if she doesn’t go, she doesn’t think her daughter will ever be able to think of her as a role model. What does Anu mean by that, and did you agree with her reasoning?

8. Anu has a close relationship with both her parents, but at the same time, she’s felt that she needed to hide a lot about who she is and what she wants in order to meet their expectations. How has her relationship with both Lakshmi and Kunal evolved? And why do you think Anu was never able to be honest with them until their confrontation in London?

9. Is Anu’s jealousy of Neil’s love interests reasonable, considering that she was the one who asked for the separation and first started dating other people?

10. Anu feels responsible for Imogen’s hospitalization, and thinks she should have done more, even though she tried to respect Imogen’s decision to deal with her depression on her own terms. Do you think Anu did enough as a friend? What further action could or should Anu have taken?

11. Toward the end of the novel, when Anu and Neil are discussing their marriage, Neil says, “We started a family so young and had to grow up so quickly, sometimes I think we didn’t have time to grow up at all.” Did you agree or disagree with his statement?

12. In Anu’s own words, she “goes off the rails” for a while in a bid to find her own sense of self and independence, much like an adolescent. By the end of the novel, do you think Anu was ultimately able to “grow up”? What do you think she struggled with the most in her bid to become a grown-up?
Learn More About Grown-Up Pose
print

The Marriage Game
Sara Desai
Back to Top