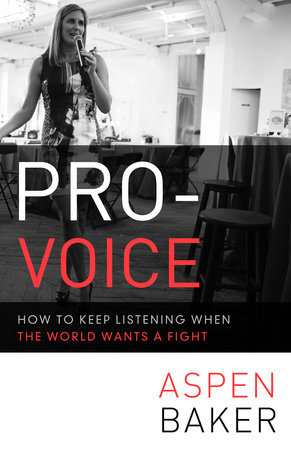 How to Keep Listening When the World Wants a Fight

When Aspen Baker had an abortion at the age of twenty-four, she felt caught between the warring pro-life and pro-choice factions, with no safe space to share her feelings.

In this hopeful and moving book, Baker describes how she and Exhale, the organization she cofounded, developed their “pro-voice” philosophy and the creative approaches they employed to help women and men have respectful, compassionate exchanges about even this most controversial of topics. She shows how pro-voice can be adopted by anyone interested in replacing ideological gridlock with empathetic conversation. Peace, in this perspective, isn’t a world without conflict but one where conflict can be engaged in—fiercely and directly—without dehumanizing ourselves or our opponents.

The founder of Exhale, a nonjudgmental post-abortion talkline, urges an approach toward compassionate dialogue around contentious issues that is centered on listening to individuals' stories of "nuanced, complicated personal experience." Baker expresses frustration with the polarized parameters for public discourse about abortion that are established by politicized activism on both the pro-life and pro-choice sides, and urges instead a empathetic, nonviolent "pro-voice" approach that "rehumanizes toxic dynamics" by focusing on listening, telling, and engaging with the personal accounts behind controversial issues. This method embraces the gray areas of polarizing topics, and offers respect and human dignity across the diversity and complexity of emotional experiences. Baker believes strongly in the power of narrative to communicate across conflict, opening minds and allowing people to see themselves in the experiences of others. Though the emphasis on the success of Exhale can come across as off-puttingly self-congratulatory, Baker's message to activists is powerful: when we hear one another as people and not as enemies, we create a world in which authenticity and innovation can help us find a way past entrenched obstacles to social change. (June)
—Publishers Weekly

“I recently learned that I already was pro-voice, and when you read this book you will likely discover that you are too. Together we can transform the ‘us versus them’ dynamic that dominates our politics and media. Together we can create a new norm of respectful, caring engagement.”
—Joan Blades, founder of MoveOn.org, MomsRising, and Living Room Conversations

“With Pro-Voice, Aspen Baker revels in the deep discomfort of ambiguity rather than the shallow, sure waters of polemic. It is a testament to the transformational possibility of exploring the neglected gray area beyond the overly traveled black and white. I've never read anything quite like it.”
—Courtney E. Martin, author of Do It Anyway

“Aspen Baker takes one of the most contentious issues of our age and pulls an unexpected magic trick. Instead of delivering up a call to arms, she opens up a safe place for empathy, caring, and transformation.”
—Glynn Washington, creator and host of NPR’s Snap Judgment

“In this wise and compassionate book, Aspen Baker makes clear how strange it is that the people who battle over abortion policy rarely hear the stories of women who have actually had abortions. With sensitivity and insight, she shows that people’s personal stories can transform the debate. Pro-Voice is smart, provocative, and, finally, heartening.”
—Francesca Polletta, Professor of Sociology, University of California, Irvine, and author of It Was Like a Fever

“Aspen Baker’s sharply insightful new book illuminates the refreshing—and groundbreaking—attitude she takes toward abortion, a stance that embraces the emotional complexity of women’s abortion experiences and reveals the discussion’s many gray areas that are so often obscured by political gamesmanship.”
—Martha Shane, filmmaker, After Tiller

“Thank you, Aspen, for asking the global community to create an environment of compassionate pro-voice dialogue around this ubiquitous, incendiary issue. May this book birth the healing we all need.”
—Deborah Santana, author, philanthropist, and founder of Do a Little

“The pro-voice movement Aspen Baker founded in Exhale is based on the idea that we are all storytellers, with the right to our own stories; specifically that every woman has the right to her own feelings about the experience of abortion, whatever they might be. As a journalist who writes about reproductive rights, I truly believe this approach is the only way to bridge a divide in this country that is putting woman’s lives in peril.”
—Liz Welch, award-winning journalist and coauthor of The Kids Are All Right and I Will Always Write Back

“We have less and less authentic space for dialogue in our country, yet Aspen Baker has taken the power of listening into the most contentious of territories, the abortion debate. She has shown that the stories that emerge when someone feels respected and safe enough to share them have the power to heal. We can choose to listen, and if we do, perhaps we can create a healthier society.”
—Joe Lambert, founder and Executive Director, Center for Digital Storytelling

“The abortion debate—or rather, standoff—is one of the most polarizing in our polarized country. Pro-Voice creates humane connections across the passion-filled gulf that divides abortion conversations; then, as Jonathan Powell has also written recently, ‘There is no conflict in the world that cannot be solved.’ If that is not a reason for hope, what is?”
—Michael Nagler, author of The Search for a Nonviolent Future and The Nonviolence Handbook and President, Metta Center for Nonviolence

“In Pro-Voice, Aspen Baker raises a bold mandate that we hear people’s abortion stories and imagines a world in which abortion is understood not through conflict but through empathy, regardless of one’s politics. Baker shows, despite the loud rhetoric, that personal experiences with abortion are rarely spoken, and even more rarely are they compassionately heard. Proudly defying political categorization, Pro-Voice challenges everyone to step away from the fight in favor of deeper understanding. This is a most courageous and necessary book.”
—Marjorie Jolles, PhD, Associate Professor, Women’s and Gender Studies, Roosevelt University

“We’ve made great progress on tough social issues by sharing our stories authentically. Pro-Voice dives into that topic and makes it actionable. If you’re an organizer it’s a must-read in 2015!”
—Raven Brooks, Editor, Netroots Nation

“In Pro-Voice, Aspen Baker shows us how to make America’s abortion wars a relic of the past. Sharing and listening can heal old wounds and generate a new understanding and respect for this deeply personal issue.”
—US Congresswoman Gwen Moore

“In a world where everyone forces you to chose a side around abortion, Pro-Voice challenges all of us to put empathy first and ideology second. Aspen Baker radically reframes our current culture war over abortion by putting stories first. By centering the voices of women, Baker clearly explains that actual conversation—not preaching or stonewalling—is the only way to move forward.”
—Latoya Peterson, feminist, activist, and owner and Editor, Racialicious.com

“The best social and policy change begins with having discussion in the real world with real people. In this book, Aspen shows us a way to listen to women in a deeper way, creating a space for us to see the complexity of experiences with abortion. This is the kind of space that will help us reach across the divisions that often separate us and see the humanity in each other. Bravo, Aspen and pro-voice!”
—Eveline Shen, MPH, Executive Director, Forward Together